For indigenous communities, fish is more than food 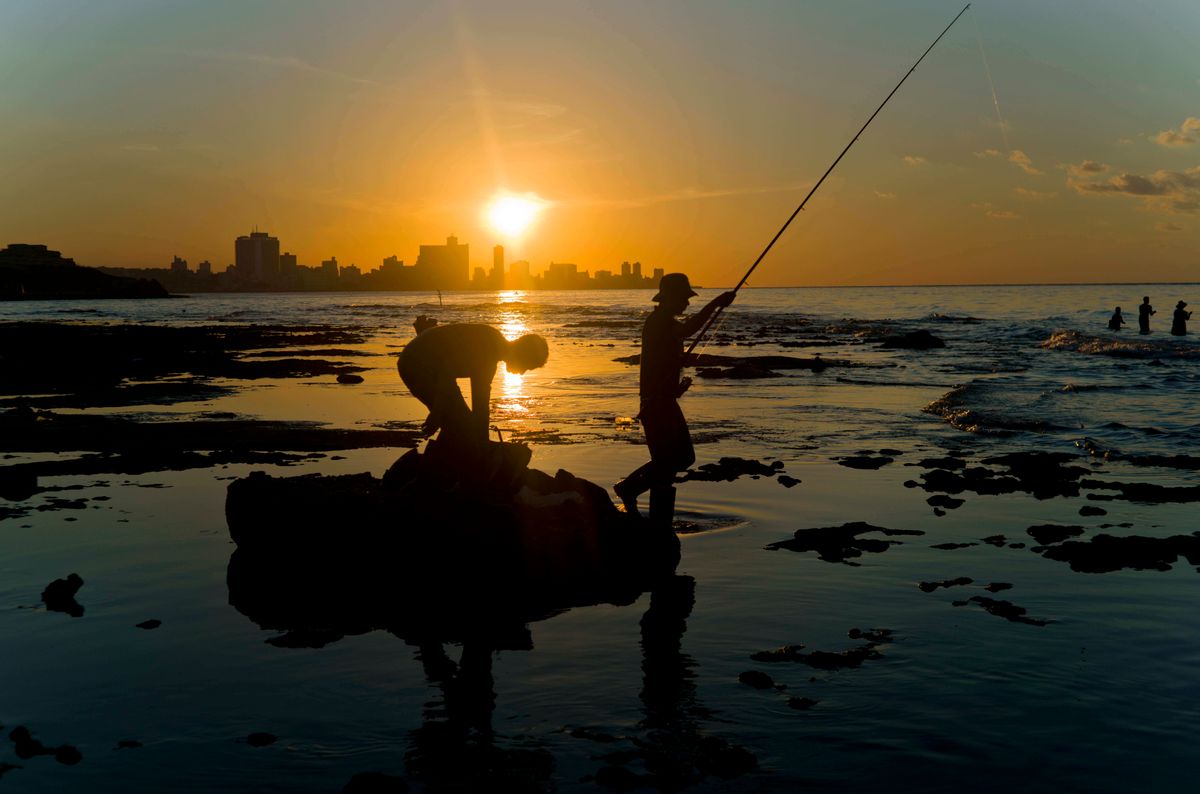 In this Nov. 11, 2016 photo, fishermen throw their fishing rods from Chivo beach as the sun sets in Havana, Cuba. Cuba has been renowned for its fishing at least since the days of Ernest Hemingway, and foreigners by the thousands come each year to fish in waters largely protected by Cuba’s lack of development. () (AP Photo/Ramon Espinosa)
--

Along the arid coastline of northwestern Mexico, indigenous Seri communities, who first resisted Spanish rule and then Mexican extermination efforts, eventually gained formal titles over a small part of their ancestral coastal and marine territories. The ocean has always sustained their livelihood, but now they must contend with outside competition over declining fish resources.

This is a familiar story for almost 30 million coastal indigenous peoples around the world from the Arctic to the South Pacific. But until recently no one had ever quantified how intensively they relied on seafood, or its importance for their existence as distinct peoples.

Seafood is crucially important to these communities – but it provides them with more than vital protein and nutrients. It also plays a role in ceremonial traditions, creating important ties between families and individuals and embodying their symbolic ties to the environment.

The practice of catching fish affirms their worldviews and puts them into action in nature. These relationships and values cannot be reflected in a number, but quantifying the dietary importance of seafood for these communities can help us understand the importance of indigenous fisheries and relationships to the oceans on a global scale.

Who is an indigenous person?

One major challenge in our study was the fact that there isn’t, and arguably shouldn’t be, a universal definition of what makes a person indigenous. According to the most widely used working definition, which has been adopted by the United Nations, indigenous peoples have a unique ethnic identity and a historical record that predates the colonial societies that exist now on their ancestral territories.

The political economy surrounding the definition of “indigenous” is complex, and no definition can fully convey the intricacy of their ethnicities, social organizations and colonial histories. Many populations are dispersed and displaced as states continue to undermine their rights and heritage.

In our study, we define “coastal indigenous peoples” in an inclusive manner but focus on those who are considered to be ethnic minorities, have historical ties to local marine geography and reside within 25 kilometers of the shoreline. We included both officially recognized and self-identified ethnic minority groups that are less than 1 percent of state populations, except populations in the Small Island Developing States. These communities all share links to marine environments, fish, marine mammals and other living organisms, mainly through fishing.

Dozens of collaborators and experts, including people from the communities, reviewed our classification and data collection methods over four years to help us ensure that we worked with consistent frameworks. We are now making the database available to the communities and scholars to pursue this transparent process.

Once we had developed our database, we estimated how much seafood people in these communities consumed, using sources such as public health and fisheries catch data. Where seafood consumption data for a community were not available, we estimated it by using averages for people from nearby indigenous communities, often belonging to the same group.

We estimate that 27 million coastal indigenous peoples consume 2.1 million metric tonnes of seafood per year. Compared to the global average of 19 kilograms (41 pounds) of seafood per person, these individuals consume 74 kilograms (163 pounds). Although they are becoming increasingly integrated into global food systems, coastal indigenous communities with cultural ties to the ocean on average eat 15 times more seafood than nonindigenous people in the same country.

This number suggests how important seafood is for coastal indigenous people’s food security. But we also must consider their “food sovereignty,” which implies not only having enough food, but being able to choose what you eat.

Indigenous peoples’ relationships with the sea and landscape play an important role in maintaining their identities as distinct cultures. But new and ongoing stresses, including climate change and economic globalization, are threatening indigenous people’s ties to oceans and marine resources around the world.

The United Nations Declaration on the Rights of Indigenous Peoples recognizes “the right to the lands, territories and resources which [indigenous peoples] have traditionally owned, occupied or otherwise
used or acquired.” This should apply to fish and oceans as well.

However, although coastal indigenous peoples have lived in close relationship with their environments for thousands of years and have developed traditional ecological knowledge, they are vulnerable to large-scale environmental change. And global negotiations over managing ocean resources often overlook their unique needs.

For instance, the Bajau Laut, or “sea normads,” are an indigenous group dispersed across Indonesia, Malaysia and the Philippines. They have been successful maritime traders for centuries and still live on houseboats, moving along coasts and fishing for their living. They are recognized as a minority ethnic group by Indonesia, but in Malaysia they are not recognized and thus are considered illegals without a nationality.

As a result, Bajau Laut in Malaysia suffer constant harassment by government officials and tend to be shunned by mainstream society, including other small-scale fishermen. They are nomadic but cannot cross political boundaries legally because they are stateless, although many still do so in boats without passports. This means they risk losing access to their traditional fishing grounds.

Because they do not exist in the Malaysian government’s eyes, they have never been involved in coral reef conservation efforts, and it is difficult even for NGOs to be able to do much for them. Their food, economic and individual security are seriously threatened.

Our goal in producing this global-scale overview of indigenous seafood consumption is to begin a conversation about the human dimension of global sustainability. We hope our estimates demonstrate that fisheries management is a human security issue as well as an environmental issue, and that we need to bring social equity into global governance of the oceans.