Nancy Pelosi cools Trump impeachment fever: "When and if he breaks the law, that is when something like that will come up" 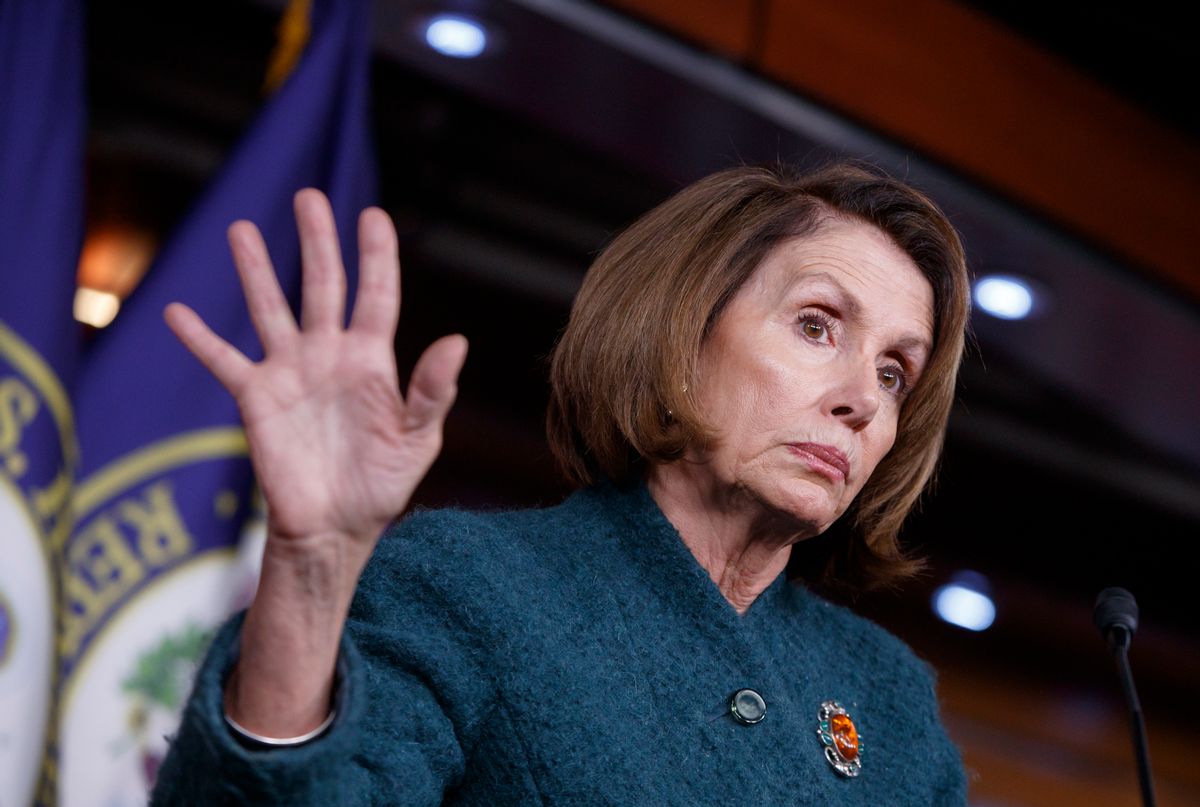 Democrats in Congress are under immense pressure to resist President Donald Trump at every turn, with a historic 40 percent of Americans already clamoring for the new president to be impeached. But the top Democrat in the House, Nancy Pelosi, is ruling out the extreme measure — at least for now.

At a Monday news conference with the top Democrats on the House Financial Services Committee, the California Democrat took steps to distance the party's leadership from the comments of a fellow Democratic congresswoman: Maxine Waters of Los Angeles. On Friday Waters had said it was her “greatest desire” to lead Trump “right into impeachment.”

On Monday, Waters clarified her comments without backing down. “I have not called for the impeachment yet,” Waters said. “He’s doing it himself."

She further explained: “Let me just say the statement I made was a statement in response to questions and pleas that I am getting from many citizens across this country: What are we going to do?":

And the fact that he is wrapping his arms around Putin while Putin is continuing to advance into Crimea — I think that he is leading himself into that kind of position where folks will begin to ask, what are we going to do? And the answer is going to be, eventually, we've got to do something about him. We cannot continue to have a president who's acting in this manner.  It's dangerous to the United States of America.

Although Trump may dismiss the concerns of Waters' California constituents as being just as "illegal" as their votes, the desire to push him out of office is hardly a fringe notion.

More than a third of the country wishes to see the president impeached, according to a national poll released late last week. This 40 percent of Americans who said they want to see Trump removed from office is greater than the 35 percent desiring to see him go a week prior to this.

Prior to the inauguration, freshman Maryland Rep. Jamie Raskin, a Democrat, said in an interview that he expected Trump to head down the impeachment path.

“But I would say if you were taking odds, this president appears to be on a course in which he is going to be engaged in a lot of impeachable activities," Raskin said.

In the two weeks since Trump's inauguration, Democrats have struggled to contend with the Republican president and Congress while satisfying a swelling demand from their progressive base to resist Trump's actions in total.

Pelosi made clear on Monday that, despite the newly elected president's "reckless" and seemingly unpopular actions during his first weeks in office, they are "not grounds" for impeachment. "I'm not here to talk about impeachment today," she told the gathered reporters shortly after Waters made her comments. “Any of the things that the congresswoman said are grounds for displeasure and unease in the public about the performance of this president, who has acted in a way that is strategically incoherent, that is incompetent, that is reckless." But, Pelosi added, "That is not grounds for impeachment."

Pelosi continued, “When and if he breaks the law, that is when something like that would come up.” Of course, since they are outnumbered by Republicans in both the House and Senate, Democrats would have an uphill battle if they sought to impeach Trump.

The House minority leader's comments came after a Sunday appearance on NBC’s “Meet the Press” in which she indicated Democrats won’t try to blindly obstruct the Trump administration in the way Republicans did to former president Barack Obama.