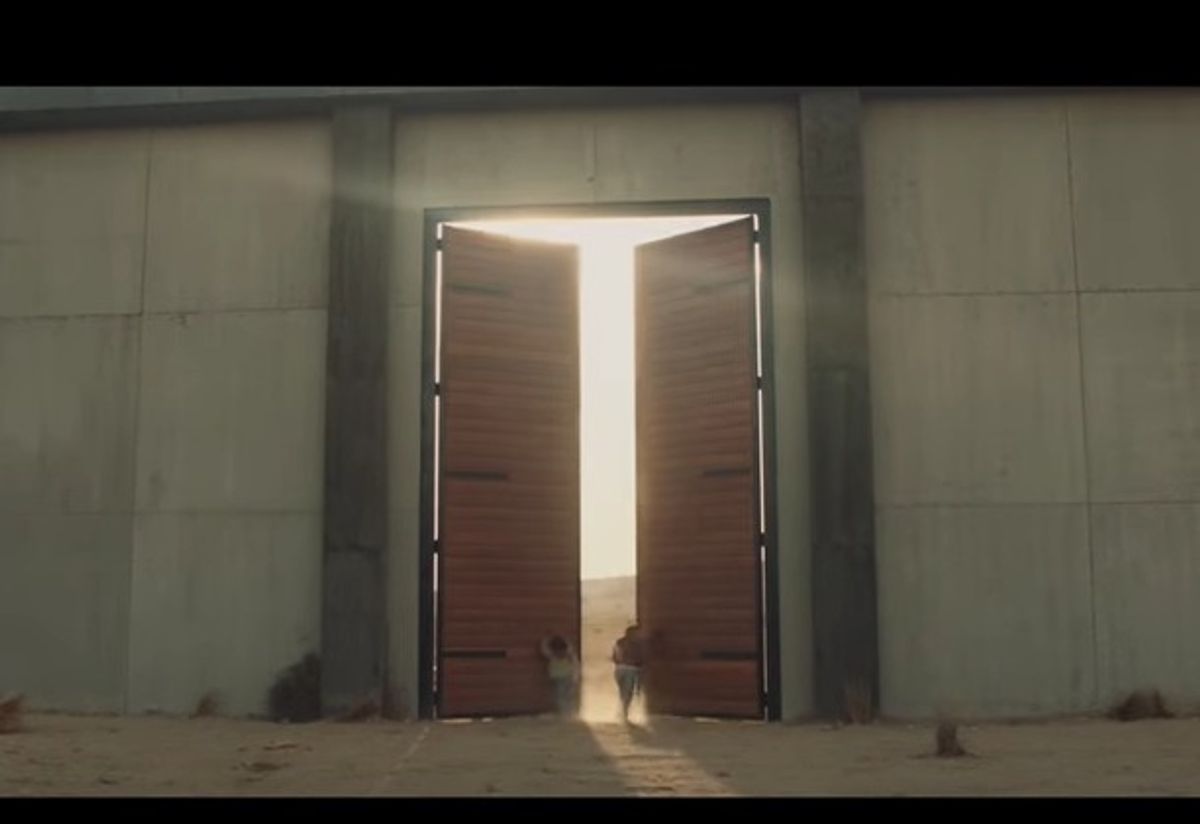 A mother and daughter find a door in a border wall from Mexico in 84 Lumber's controversial Super Bowl 51 spot. (84 Lumber)
--

A few days ago, the internet was abuzz with guesses as to what Lady Gaga's halftime performance would include. A meat suit? A challenging political statement? An explosive speech? The only hints she gave in a press conference pointed to fealty to her pro-LGBT, pro-civil rights messaging. “The only statements that I’ll be making during the halftime show are the ones that I’ve been consistently making throughout my career,” Gaga said. “I believe in a passion for inclusion. I believe in the spirit of equality, and that the spirit of this country is one of love and compassion and kindness. My performance will uphold those philosophies.”

Gaga flew into the stadium on wires, and opened with a patriotic selection of songs as drones lit the night sky in red and blue. Running through a handful of her hits, a particular highlight was the singer's “Born This Way,” which stands up for acceptance and is pro-LGBTQ.  She sang, “No matter gay, straight, or bi/ Lesbian, transgendered life/ I’m on the right track baby/ I was born to survive.”

84 Lumber, a building company, aired a 90-second ad chronicling the journey of a Mexican mother and daughter traveling miles and days through hardships towards the U.S., only to be met by an ominous border wall blocking a better life.  Super Bowl viewers were directed to the company's website to see how the story unfolded, as Fox Broadcasting had refused to air the spot in its entirety - deeming it too controversial.  84 Lumber's website promptly crashed, highlighting the growing support for immigrant and civil rights anew in the face of President Donald Trump's recent Muslim travel ban and ongoing efforts to build a U.S.-Mexico border wall.  The full 84 Lumber spot concludes with the message, "The will to succeed is always welcome here."

Not to be outdone, Budweiser ran a period piece ad, called “Born the Hard Way, which did away with their traditional Clydesdale horses and took viewers on Anheuser-Busch co-founder Adolphus Busch's immigration journey to the U.S. in 1857 from Germany. Though he is met with opposition and intolerance as a foreigner, Busch carries the message “nothing stops your dream.”  Busch's story touched some viewers, and touched a nerve with others. Social media lit up with annoyance over the use of politics in Super Bowl ads, and some felt the spot was too pro-immigrant. Suggestions of a boycott abounded.

Digital world advertisers were also in step, as were some of the traditional bigs.  Air Bnb presented a multi-cultural spot with copy running across diverse faces, which read, "We believe . . . no matter who you are . . . where you're from . . . who you love . . . or who you worship . . . we all belong."  Titled "#weaccept", the spot concluded, "The world is more beautiful . . . the more you accept." In an example of smart follow-up marketing, Air Bnb users received an email at 11:24 pm EST featuring the spot, with the subject, "Acceptance starts with all of us", promising to deliver short-term housing to 100,000 people during "urgent times" over the next five years.

Coca-Cola saved some dough on production and reran its 2014 spot, "It's Beautiful" ust before the game. Featuring different voices in many languages (including English, Spanish, Keres, Tagalog, Hindi, Senegalese, French, and Hebrew) singing “America the Beautiful,” the Twitterverse exploded with calls to "#BoycottCoke" afterwards. The Coca-Cola Company has stood by the ad's messaging since it came out three years ago, and in a 2016 statement, they wrote of its intentional placement during national prime time events. "We believe it’s a powerful ad that promotes optimism, inclusion and celebrates humanity."