With a hand from Fox News, Donald Trump is arguing that anyone who protests against him is in it only for money 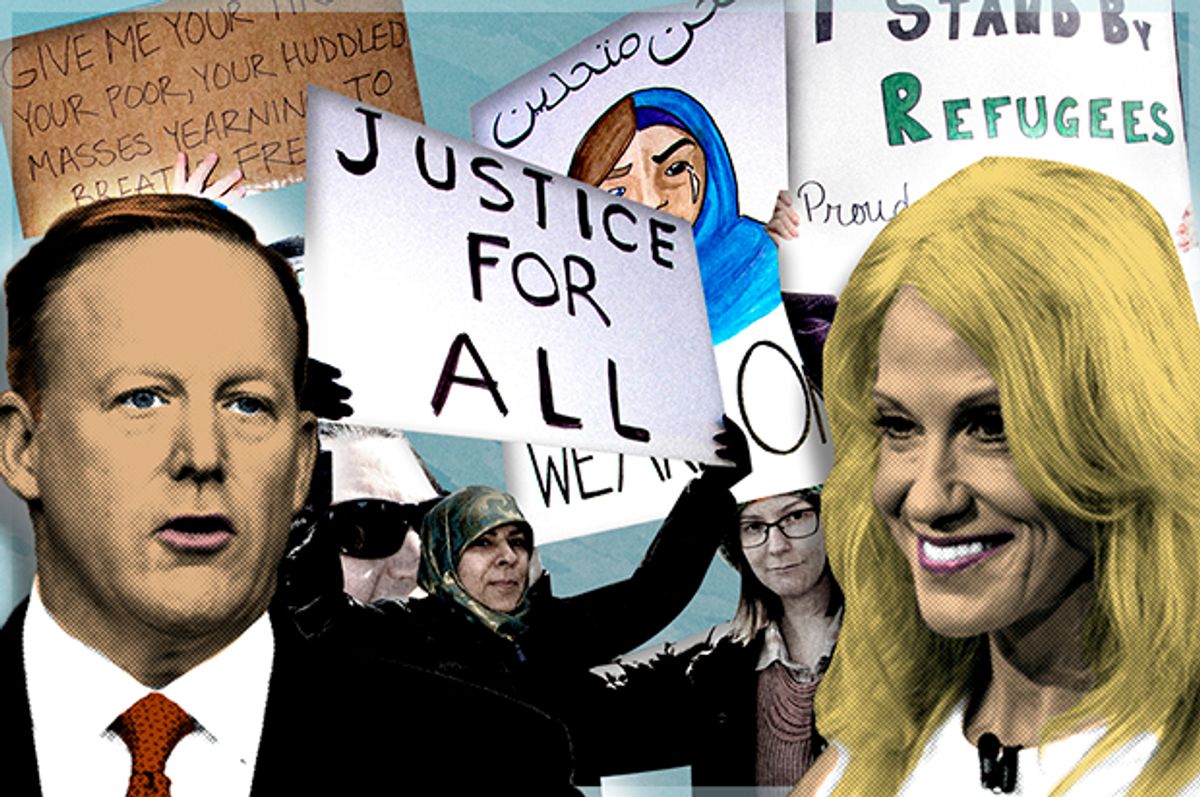 One of the ways that the Trump White House attempts to justify its policy proposals is to appeal to a popular mandate that does not exist. Donald Trump is a historically unpopular politician who is actively loathed by a large segment of the population. No previous president has alienated the public as efficiently as Trump has. And his policies, though slightly less reviled, are not well-liked by any stretch.

Trump and his team, however, insist that the opposite is true — that the president isn’t just popular, that he’s extremely well-liked. The lengths they go to in order to prop up this fiction have been the source of much of the ridicule and mockery that have attended the first few weeks of the Trump presidency.

To beat back challenges to his legitimacy after losing the popular vote, Trump simply asserts that he was the victim of mass voter fraud. One of the first things Trump did as president was force his White House press secretary to give a haranguing lecture to the media about how the crowd for his inauguration was much larger than it actually was. When polls have come out showing a lack of support for Trump or his executive orders, the president has tweeted that every survey that says he’s unpopular is fake.

One thing that can’t so easily be dismissed or denied, however, is the massive protest movement that has sprung up in response to the Trump presidency. There were large-scale demonstrations against Trump the day after his inauguration and still more protests at airports after Trump imposed a travel ban on arrivals of peopple from seven predominantly Muslim nations. Those rallies have captured a lot of media attention, successfully forced policy changes and provided a means for anti-Trump forces to organize and coordinate.

The White House’s response to all this has been to insist that the many hundreds of thousands of people turning out in the streets to oppose the administration are actually being paid to do so. Trump himself tweeted that “professional anarchists” and “paid protesters” were taking to the streets:

Professional anarchists, thugs and paid protesters are proving the point of the millions of people who voted to MAKE AMERICA GREAT AGAIN!

On Fox News on Monday morning, White House press secretary Sean Spicer was asked by “Fox & Friends” host Brian Kilmeade if “instead of being organic disruption, do you sense that there’s organized pushback, people are being paid to protest?” Spicer replied that was indeed the case.

“Oh, absolutely. I mean, protesting has become a profession now,” Spicer said. “They have every right to do that. Don’t get me wrong, but I think that we need to call it what it is. It’s not these organic uprisings that we’ve seen through the last several decades. You know, the Tea Party was a very organic movement. This has become a very paid, Astroturf-type movement.”

This is important for a few reasons. The first thing to point out is that the administration does not have any evidence that anyone is “being paid to protest,” as Kilmeade put it. Prior to the inauguration, reports flew around about a company that was hiring protesters to “disrupt” inaugural events. But the existance of the company and its purported mission were easily debunked as hoaxes and quite publicly exposed as such on Fox News by host Tucker Carlson.

When it comes to the claim that the protests were organized, yes, they were. Planning for the Jan. 21 Women’s March on Washington began almost immediately after Trump was elected. Small activist groups in places like New York and Chicago also began working their networks to mobilize people and plan protests like the ones we saw at the nation’s airports as a response to Trump’s immigration order. But saying a protest was aided by organization and coordination doesn’t make it less legitimate. Quite the opposite. These groups were better able to capitalize on the anti-Trump sentiment precisely because they know how to mobilize people.

Just as the president argues that he lost the popular vote only through illegitimate votes, the administration and its enablers at Fox News are trying to make it seem like there is no legitimate public opposition to the administration. They assert that the protests aren’t “organic,” which means they’re manufactured and full of people who are there only because someone is paying them to show up. It’s an absurd lie that requires you to disregard common sense and what you can see with your own eyes. An estimated 3 million people turned out to protest the day after the inauguration in towns and cities all across the country: How many of those people are we supposed to believe were “professional protesters” who were paid to attend? And who, exactly, is footing the bill for all this paid protesting?

The irony here is that there’s one person we know for sure has paid people to show up and voice a prefabricated political message: Donald Trump. In the summer of 2015, Trump arranged for actors to show up at Trump Tower and cheer and wave signs as he announced his candidacy for president, offering them $50 for their services. And, in typical Trump fashion, he tried to stiff the agency that set up his Potemkin campaign launch.

It really is hard to find reliable paid activism work these days.