George W. Bush's "torture lawyer" turns on Trump — but it may be too late

John Yoo unleashed the "unitary executive" theory that enabled Bush's torture program. Now he wants to take it back 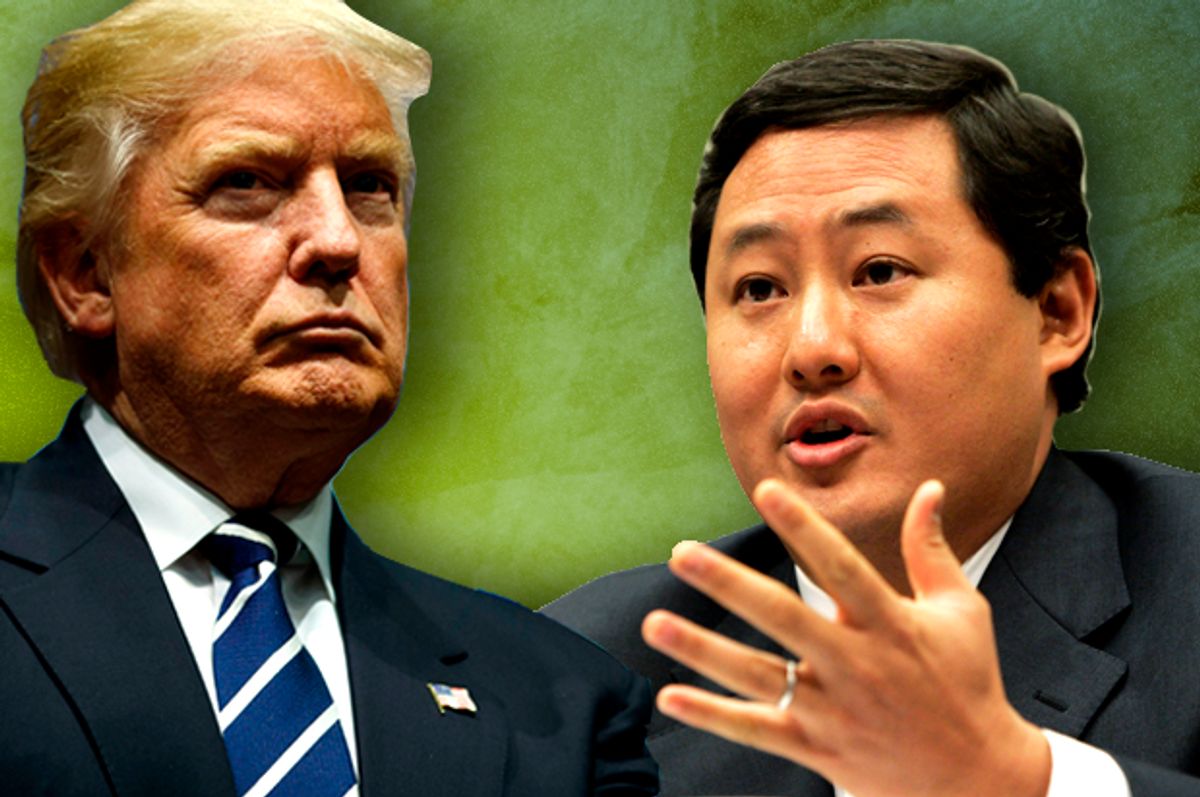 I have written many times about what I consider to be the most horrific yet illuminating, aspect of Donald Trump's character: his enthusiastic endorsement — actually, his self-professed love — of torture. He uses the word freely, without any sense that there's a moral or legal taboo against it and without any idea that what he's saying is an anathema to decent people everywhere.

But as much as Trump has normalized the word, he isn't the one most responsible for reviving this primitive form of violence as a method of interrogation. That honor belongs to members of the last Republican administration. And they didn't just talk about it; they actually did it.

If you're unfamiliar with the details of that awful chapter, the executive summary of the classified Senate torture report will fill you in or you could read investigative journalist Jane Mayer's book, "The Dark Side: The Inside Story of How the War on Terror Turned Into a War on American Ideals." There were many torturers and enablers of torture including, shockingly a woman closely associated with the program, Gina Haspel, whom Trump has named to be second-in-command at the CIA.

But nobody is more notoriously connected to the Bush administration's torture program than John Yoo, who was head of the Department of Justice's Office of Legal Council. Yoo is a Washington lawyer who sat behind a desk; he never tortured anyone. But it's safe to say they couldn't have done it without him.

Yoo was responsible for the famous memo, later repudiated, that said violence against prisoners must create pain equivalent to organ failure to be considered torture and that the Geneva Conventions were "quaint." His opinion made it possible for the people who carried out the torture program to claim immunity since they were operating under a legal finding of the Department of Justice. It was a nice "get out of jail free" card that was never really tested in court. When the Obama administration shut down the program, it decided to not prosecute anyone. Some legal scholars believe Yoo himself remains liable for war crimes even today.

Yoo is most famous for his enthusiastic willingness to find ways to legalize uncivilized behavior, but it's important to recall that the justification for his opinions was based upon a constitutional theory called the unitary executive theory. This essentially holds that during wartime a president can exercise virtually unlimited authority, which can be checked by Congress only by using the "power of the purse." Since the "war on terror" was a unique construct that could not possibly have a definitive end, that meant the president was to have nearly dictatorial power for the foreseeable future. Among other things, according to Yoo, the president could suspend the Posse Comitatus Act, which forbids the government to deploy the military for domestic police actions, and the Fourth Amendment, which prevents unreasonable searches and seizures, by holding that they don't apply to domestic military operations undertaken during a “war on terror.”

Yoo was very popular with Dick Cheney, who heavily promoted the view that the executive branch is empowered to pretty much do anything in the name of national security. This is often referred to as the "One Percent Doctrine," in reference to a comment made by Cheney shortly after 9/11:

If there's a 1 percent chance that Pakistani scientists are helping al-Qaida build or develop a nuclear weapon, we have to treat it as a certainty in terms of our response. It's not about our analysis. . . . It's about our response.

Donald Trump doesn't have the vocabulary or the brains of Dick Cheney, but his theory about refugees is similar, isn't it? Refugees and immigrants from the countries he's chosen for his ban do not present a plausible threat of terrorism. But Trump believes that if there's even a 1 percent chance that even one of them could be a terrorist, they all must be kept out. At least Cheney had the intellectual wherewithal to frame his argument about the possibility of loose nukes. Trump thinks an emotionally disturbed Muslim man with a machete is a bigger threat than 30,000 preventable deaths by gunfire every year.

The best example of Trump's crude deployment of bullying is his insistence that he has no obligation to divest himself of his business holdings and, in fact, intends to continue to benefit from them while he's in office. This high-handed dismissal of the obvious conflicts of interest and inherent corruption is based upon what he says over and over again is the legal opinion of his White House counsel: "The president cannot have a conflict of interest," as if that means it's impossible for him to be corrupt. That goes beyond the unitary executive theory to the idea of a king who believes he's been ordained by God.

Trump's first two weeks have been spent doing nothing but signing executive orders. While all presidents use them, the power Trump believes is vested in these orders is unprecedented. And some of them, in particular his ban on immigration from certain Muslim countries, may be leading him toward a constitutional crisis, at least if his comments and tweets are any clue as to his intentions. He apparently believes the judicial branch should not be allowed to second-guess his decisions if they conflict with the law or the Constitution. Even Yoo didn't go that far.

In fact, Yoo wrote an op-ed in The New York Times on Monday expressing "grave concerns about Mr. Trump's use of executive power." He suggested that the travel ban was ill-conceived, the order for a border wall exceeded presidential authority, the slapping of tariffs on Mexican goods is unconstitutional and the ad hominem attacks against former acting attorney general Sally Yates "suggest a misconception of the president’s authority of removal." When Yoo has grave concerns about the use of executive power, you know something very bad is happening.

Unfortunately, while Trump may not know or care about the legal precedents behind his actions, his lawyers surely do, and you can be sure they'll be citing Yoo's work on the unitary executive theory. No one could have predicted that Trump, of all people, would become president, but that's exactly why the cumbersome checks and balances were put in place to begin with. You just never know who's going to land in that office, or how he will want to use that power once it's unleashed. If Trump gets away with this power grab, Yoo will have only himself to blame.