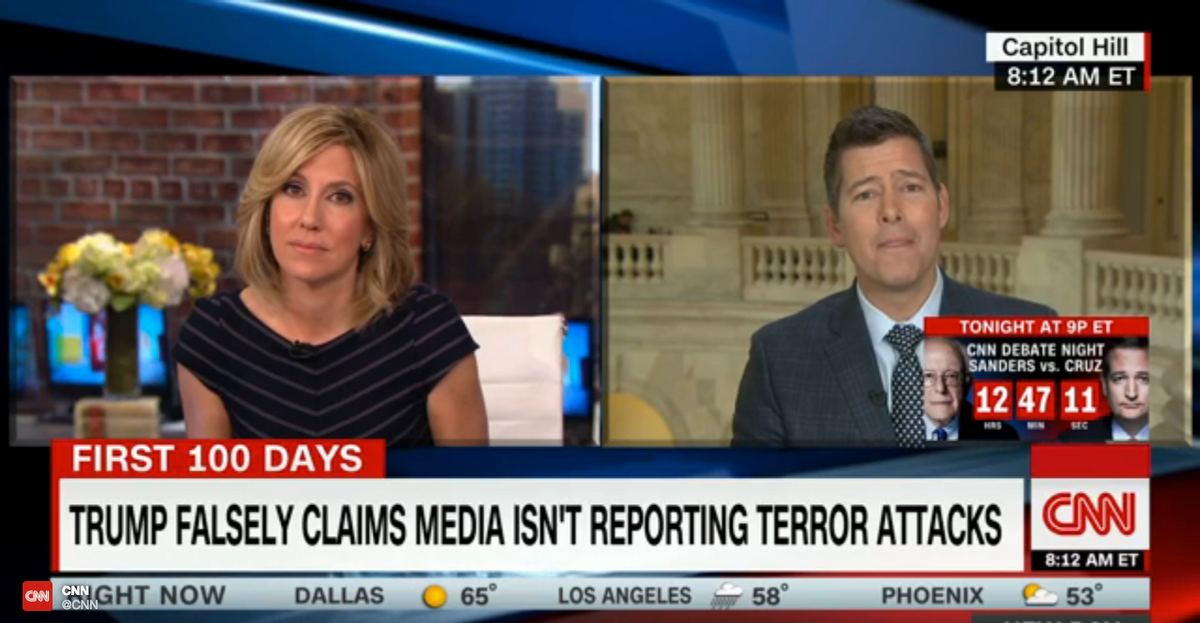 Republican Rep. Sean Duffy believes there is no comparison between radical Islamist attacks and violence carried out in the name of white supremacy. In fact, the Wisconsin congressman compared Trump's silence on the Canadian mosque shooting to the media's inadequate coverage of people getting "beat up for wearing a Make America Great Again hat."

In a Tuesday interview on CNN's "New Day," Duffy was asked by host Alisyn Camerota why the president was so gung-ho about fighting radical Islam, but has made no mention of the recent terror attack in Canada carried out by a white lone wolf who targeted Muslims in a mosque.

"There is a difference," Duffy said. "Death and murder on both sides is wrong. But if you want to take the dozens of scenarios where ISIS-inspired attacks have taken innocents." Duffy added, "And if you give me one example, I think that was in Canada, I am going to condemn them all. You don't have a group like ISIS or Al-Qaeda that's inspiring people around the world to take up arms and kill innocents."

"Are you going to compare the one attack up in Canada to all the death and destruction in Europe from refugees?" he added.

Camerota incredulously pushed back, referencing the 2015 church shooting in Charleston. (Incidentally, she could have also cited as an example the 2012 terrorist attack at a Sikh temple in Duffy's home state of Wisconsin, which left six dead at the hands of a white supremacist.) But Duffy barely acknowledged the racial hatred involved in the Dylan Roof shooting. Instead, he asked the "New Day" audience to "look at the good that came with it. Nikki Haley took down the Confederate flag."

The congressman then pivoted to a favorite talking point of the right — that the left has its fair share of radicals.

"You look at Gabby Giffords, the Marxist who took her life. A leftist guy. Now you see violence and tears in the streets all across America, burning and beating people with Donald Trump hats. The left has to say violence is wrong," Duffy said. "People get beat up for wearing a Make America Great Again hat. When is the media and left going to say this is wrong?"

(For the record: Former Rep. Gabby Gifford's shooter, Jared Lee Loughner, was diagnosed with schizophrenia and went on long, tangent rants about a currency conspiracy theory. Also for the record: Mrs. Giffords did not die in the shooting, despite what the congressman said.)

From Duffy's perspective, the shootings at the Canadian mosque and the Charleston church did not stem from the same "cell" or "heartbeat" like ISIS-inspired attacks.

"What is the heartbeat of the attack you referenced in the mosque, or what happened in Charleston?" Duffy asked Camerota.

"Can we vet that? How should we vet that to keep ourselves safe? What do we do on the white supremacy front to make sure we do not have another attack like Charleston?" Duffy said.

He then went on to explain why the immigration ban was such a grand idea.