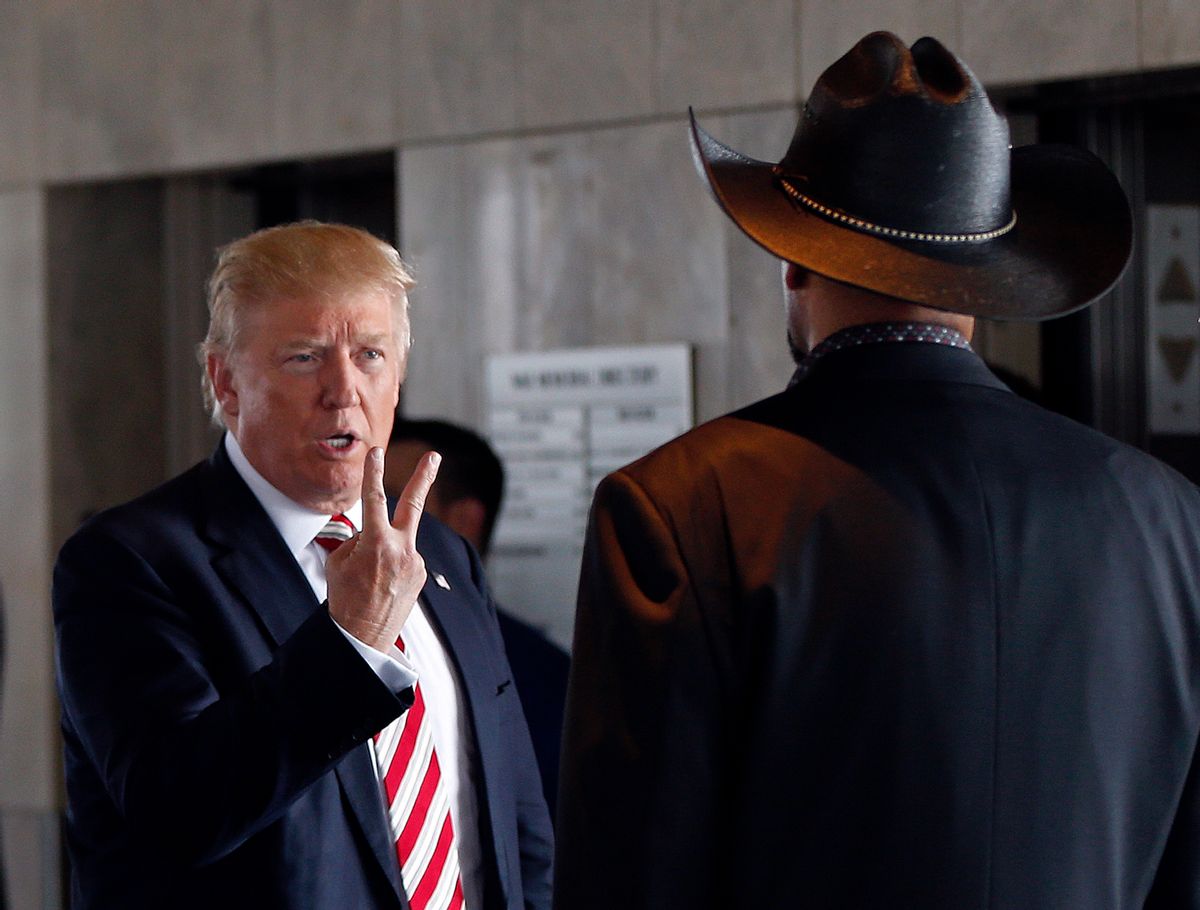 FILE - In this Aug. 16, 2016 file photo, then-Republican presidential candidate Donald Trump gestures as he talks with Milwaukee County Sheriff David Clarke, left, during a campaign stop at Milwaukee County War Memorial Center in Milwaukee. Clarke has risen to the national political spotlight with a brash, unapologetic personality reminiscent of President Donald Trump. But while some Republicans swoon over his prospects for higher office, the tough-talking, cowboy-hat wearing lawman remains one of the most polarizing figures in Wisconsin politics. (AP Photo/Gerald Herbert, File) (AP)
--

President Donald Trump quipped Tuesday that he would "destroy" the career of a Texas state senator who introduced legislation that a county sheriff doesn't like.

Trump was speaking with representatives from the National Sheriff’s Association at the White House when one sheriff complained about efforts to restrict the controversial practice of civil asset forfeiture. Police in some jurisdictions can confiscate an individual's money or belongings as soon as police accuse the person of a crime. It's common for local police departments to grab whatever they can -- even possessions unrelated to an investigation or potential crime. An individual does not need to be charged with, or convicted of, any crime for police to seize assets.

Former President Barack Obama sought to rein in an asset sharing program by which local law enforcement were given a share of whatever assets they seized. On Tuesday, Trump attempted to reassert his commitment to law-and-order at Tuesday's meeting and asked the county sheriffs from across the nation what he could do as president to aid their work.

Concerning asset forfeiture laws, Rockwall County Sheriff Harold Eavenson said, "We've got a state senator in Texas that was talking about introducing legislation to require conviction before we could receive that forfeiture money."

“Can you believe that?” Trump interjected.

“And I told him that the cartel would build a monument to him in Mexico if he could get that legislation passed,” the Texas sheriff continued.

Trump responded, "Who is the state senator? Do you want to give his name? We'll destroy his career."

The people in the room laughed, but Eavenson declined to identify the state senator. Eavenson will become president of the National Sheriff's Association in June, the Dallas Morning News reported.

The public information officer for the Rockwall County Sheriff's Office has not responded to a request for comment. A White House spokesperson told CNN the president was simply joking.

While it is unclear which state senator the sheriff was referring to, a bill to require that money and property be taken only after someone has been criminally convicted of a crime related to the property was introduced in December by Libertarian-leaning Republican state Senator Konni Burton.

"Right now, law enforcement can seize property under civil law, and it denies people their basic rights," Burton told the Texas Observer. "There's a basic problem with this process that I want to correct."

While a December 2016 poll found that 84 percent of Americans oppose civil asset forfeiture, Burton said that she has gotten pushback from several law enforcement officials. A similar bill was introduced by Texas lawmaker Rep. David Simpson in 2015, but it was blocked after severe objections from law enforcement.

In 2014, the Treasury and Justice departments snatched up $5 billion in seized assets, according to the Institute for Justice. In the Lone Star State, $41.5 million per year on average is fed into county law enforcement budgets through civil forfeitures. A 2013 Houston Chronicle investigation found that a number of these operations are not disclosed in the public record or reviewed in federal court.

In addition to Burton and Simpson, other possible senators the sheriff could have been referencing include Senators Juan "Chuy" Hinojosa (D-McAllen), Bob Hall (R-Rockwall), and Don Huffines (R-Dallas), according to the Dallas Morning News.

Hinojosa told the paper that while he didn't believe he was the target of Eavenson's comments, he isn't concerned about Trump's joking threat.

"I don't know the sheriff," Hinojosa said. "Quite frankly, I don't pay much attention to what Trump says anymore."

Law enforcement officials, however, have largely been supportive of Trump and his pledges to empower police. As Eavenson noted at the White House meeting, his county "is probably 85 percent Republican, so it was pretty easy for" Trump to win.