Were Franken and Tapper’s efforts futile, or will the heroes win out in the end? 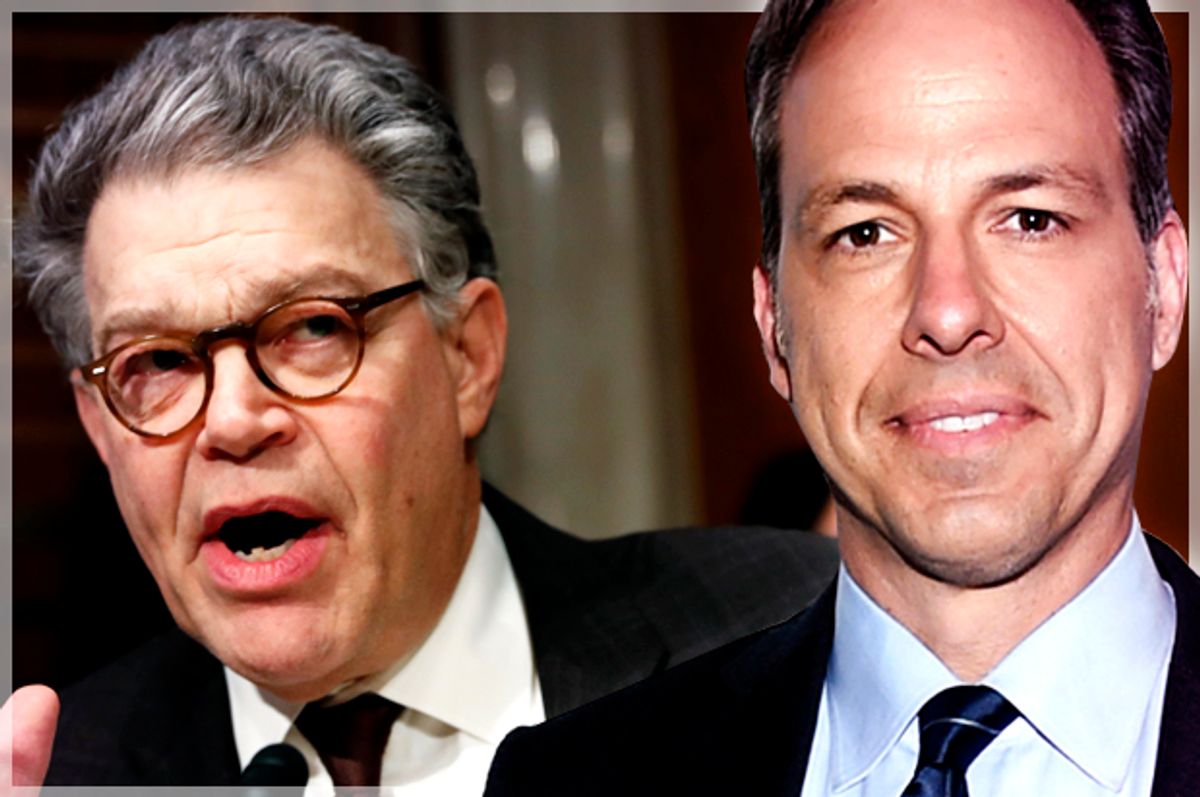 A long, long time ago, way back before the New Paleolithic Age, a screenwriter named Aaron Sorkin used to receive criticism because his television shows would affirm and indulge progressive viewers’ fantasies of journalistic and political heroes. The Atlantic’s Scott Meslow summed up the gist of these critiques nicely when he compared Sorkin to an “overzealous grade-school teacher,” who makes “viewers feel special” by building a career on “TV comfort food, setting up straw men and letting his jaded-but-noble protagonists knock them down.”

In this age in which life seems to imitate art more so than vice versa the straw men of Sorkin’s shows don’t seem so outlandish — especially given the likely composition of America’s leader’s hair. But moments of Sorkin-esque heroism — the righteous monologues and rebuttals that speak truth to power and make viewers feel warm and tingly inside — have been few and far between.

This week, Sen. Al Franken, D-Minn., and CNN’s Jake Tapper each, separately, gave the sort of “jaded-but-noble” performance typically only seen in a Sorkin production. Franken’s came in a speech on the Senate floor in opposition to Betsy DeVos’ confirmation as Secretary of Education and Tapper’s when he confronted Trump's counselor Kellyanne Conway on CNN about the president’s lies and campaign to delegitimize the press.

Spoiler alert: Neither man was successful in any sort of tangible way. DeVos was confirmed. Trump will continue to lie and delegitimize the press.

But what both Franken and Tapper did do was bring the clear sense of right and wrong found in scripted drama to real life. Their diatribes were nonpartisan, measured and eloquent; like Sorkin characters, they each appeared weary but passionate. Franken’s 42-minute speech contained many sighs. Tapper’s brow was frozen, furrowed throughout his interview of Conway. Their body language and relentlessness communicated a deep sense of injustice to viewers.

And that injustice was well-placed. Betsy DeVos was one of the most controversial of Trump’s Cabinet nominees because of how thoroughly unqualified she revealed herself to be. As Franken pointed out in his speech, the problem with DeVos was not that she had a differing philosophy on education than Democrats (although that was a problem, too) but that she couldn’t answer rudimentary questions about education policy. She was unfamiliar with terms like “proficiency” and “growth.”

Franken made an analogy: "We would not accept a secretary of defense who couldn't name the branches of the military. We wouldn't accept a secretary of state who couldn't identify Europe on a map. . . . In fact, in almost any circumstance, if a candidate for a job is asked a question that basic and that important and simply whiffs on it the way Mrs. DeVos did, there’s no second question." Who could argue?

Similarly, Tapper zeroed in on Trump’s recent statement accusing the “very, very dishonest press” of not reporting on terrorism because “they have their reasons, and you understand that.” Tapper came armed with a panoply of video clips showing CNN's reporting on the terrorist attacks that Trump referred to and he called the comment “offensive given that CNN and other media organizations have reporters in danger right now in war zones covering ISIS.” Who could argue?

Watching Franken and Tapper felt like watching Lt. Daniel Kaffee depose Col. Nathan R. Jessup of Sorkin's "A Few Good Men." There were no “you can’t handle the truth!” moments. And Jessup got off. But as a viewer — and a voter — it was plain to see who was Kaffee and who was Jessup. And maybe, just maybe, if you’d thought Jessup was the good guy throughout the narrative, you began to rethink things.