Trump's conflicts are unprecedented, but not unique: A short history of Republican corruption 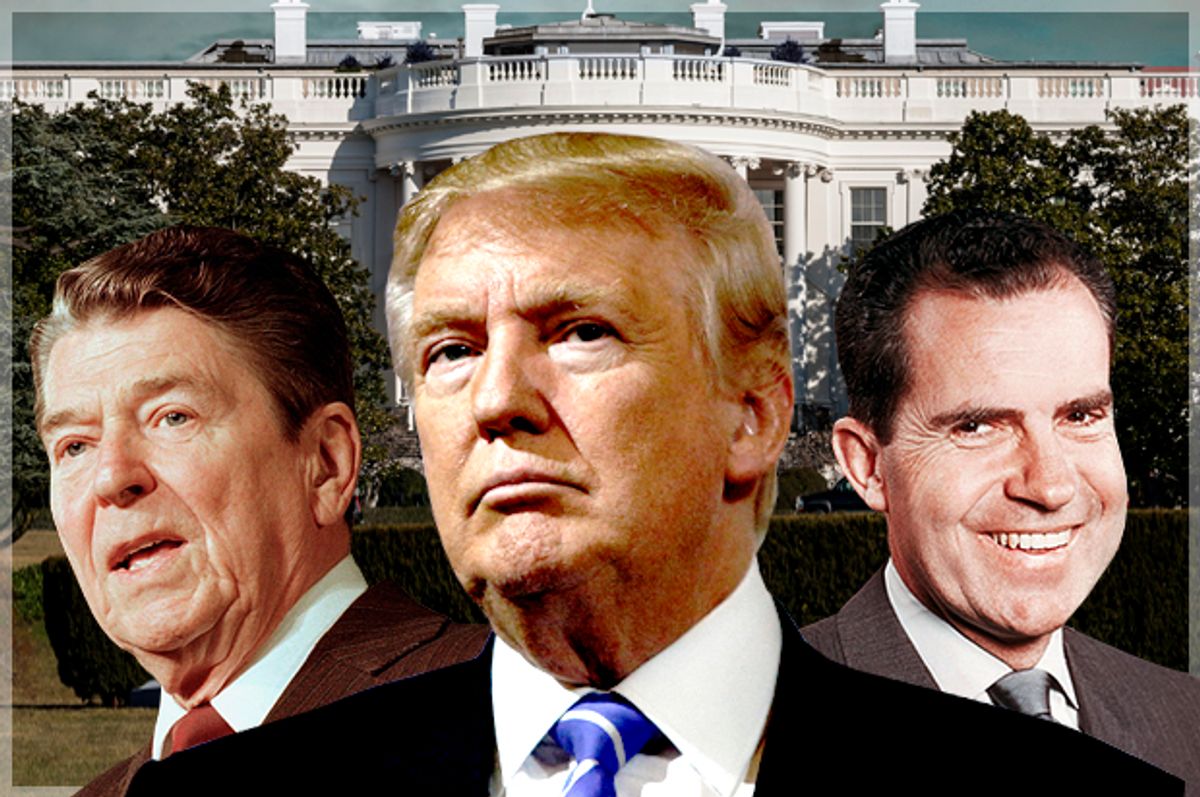 President Trump’s conflicts of interest are so vast and ubiquitous (and transparent) that it has almost become a platitude just to mention them at this point. Everyone with common sense knows that Trump’s separation from his multi-billion dollar business — currently being run by his children, who are in regular contact with their father — is a charade. Yet only Democrats (and a tiny handful of principled Republicans) seem to care in Washington.

Trump’s dissociation from his business is analogous to the farce of modern campaign finance law, in which political campaigns are technically prohibited from coordinating with corporate-funded Super PACs, yet do it with impunity because Republican commissioners on the FEC refuse to enforce the law. In a speech at the Brookings Institution last month, Walter M. Shaub Jr., director of the Office of Government Ethics, asserted that Trump “stepping back from running his business is meaningless from a conflict of interest perspective,” and that “limiting direct communication about the business is wholly inadequate. … There’s not supposed to be any information at all.”

According to a recent New York Times report, however, it turns out that Trump isn’t “limiting direct communication” as much as he had suggested. The president will “receive reports on any profit, or loss, on his company as a whole,” write Times reporters Susanne Craig and Eric Lipton, and can revoke the authority of his eldest son and his CFO, Allen H. Weisselberg, “at any time.” In addition, the purpose of the “Donald J. Trump Revocable Trust is to hold assets for the ‘exclusive benefit’ of the president.”

So Trump’s separation from his business empire is even more of a farce than previously thought. It would be naive to expect Republican politicians to change their tune in the near future. The GOP’s attitude towards corruption was made clear last month when Shaub’s uncontroversial remarks cited above, which only stated the obvious, prompted Rep. Jason Chaffetz, R-Utah, who chairs the House Oversight Committee — and who never flinched at investigating the exaggerated misdeeds of Hillary Clinton — to threaten an investigation of Shaub himself, rather than the president. It should be obvious by now that opposing corruption has become a partisan issue in Washington, and that the vast majority of Republicans simply do not care about people in power breaking the law — unless, of course, such people happen to be Democrats.

Some liberals and Independents have been shocked at how shamelessly Republicans appear to disregard the endless conflicts of interest and open corruption of the new president. They shouldn’t be. Republicans have long been tolerant of powerful elites breaking the law — in government and the private sector — just as they have long been receptive to “alternative facts.” A politician who lies as blatantly and frequently as Trump does could only succeed in a party where falsehoods have become the rule, just as a politician as openly corrupt and hostile to the rule of law as Trump is could only succeed in a party that has become completely tolerant of corruption and unethical behavior by those in power.

With all this in mind, it is hardly surprising that the most corrupt and unscrupulous presidential administrations in modern history have all been Republican. Whenever political corruption is mentioned, of course, most Americans think of Richard “I am not a crook” Nixon, likely the most corrupt and unprincipled man to ever sit in the Oval Office (although the competition is fierce). What most Americans don’t know is that Ronald Reagan’s administration was just as corrupt, if not more so, than Nixon’s. As Haynes Johnson reported in his 1991 book, “Sleepwalking Through History: America in the Reagan Years”:

Reagan’s customary response to instances of wrongdoing by aides was to criticize those who brought the charges, or to blame the media that reported them.

That serves as a useful reminder that Republicans have been scapegoating the media for decades, which has now culminated in Trump’s war against press freedom and objective truth.

Reagan, the man who perfected Nixon’s race-baiting “Southern strategy,” and who is now worshipped by Republicans as a political saint, helmed one of the most corrupt administrations in modern history — with the most notorious scandal obviously being the Iran-Contra affair. The widespread corruption of the Reagan administration was largely due to the incompetent leadership of the president — who was likely suffering from early symptoms of Alzheimer's disease toward the end of his second term — along with the general ethos of his administration. The Nixon administration’s criminality, on the other hand, always had the president’s fingerprints on it. The unscrupulous and vindictive Nixon called the shots, from the Watergate burglary to the subsequent coverup to the break-in at the office of Daniel Ellsberg’s psychiatrist.

Those two administrations, though led by men with very different temperaments, shared many of the same characteristics (besides corruption). Both Nixon and Reagan sought to exploit racial tensions and cultural fears, and made “law and order” the staple of their platforms. And while Nixon launched the disastrous “war on drugs,” it was Reagan who vastly escalated it a decade later, leading to unprecedented growth in the prison population. (The number of nonviolent drug offenders in prison increased from 50,000 in 1980 to more than 400,000 in 1997).

There is an obvious irony in the fact that the two most corrupt administrations in modern history were elected on the promise of “law and order” — and it is hardly coincidental that our current Republican president, who revamped this law-and-order rhetoric for the 21st century, seems well on his way to surpassing both Nixon and Reagan in unethical behavior. This reveals something fundamental about Republican philosophy. While conservatives are ever eager to fill our prisons with nonviolent drug users and poor people of color (and, occasionally, political opponents), sending a rich, respectable Wall Street executive, a powerful politician or a corporate billionaire to prison for breaking the law is almost unthinkable. Powerful elites simply don’t belong in a penitentiary, locked up like lowly animals. And when the crime is beyond doubt, a big fine, personal ruin or a few years' probation, at most, is adequate punishment.

As Republicans continue their crusade to make legal bribery great again by gutting campaign finance law, and make Wall Street fraudulent again by deregulating the financial industries, the Trump administration will likely escalate the failed drug war  with Jeff Sessions as attorney general and imprison many more people for drug use — or for simply being poor. If someone has money or power in America, or if someone is the right skin color, he or she can generally avoid going to prison for committing a crime, barring major felonies like murder. If a poor person or a person of color is arrested with a bag of pot, on the other hand, he or she will likely end up behind bars.

President Trump, of course, is one of the richest men in America (or at least claims to be), and has always had top-tier lawyers by his side. In a sense, then, he has always been above the law. He will surely continue to govern that way, and to disparage judges and the courts when they rule his policies unlawful. Trump has the unethical and vindictive nature of Richard Nixon, the shallow and incurious intellect of Ronald Reagan and the autocratic temperament of a man who has ruled his privately-held business with an iron fist. Time and again the president has shown himself to be an unethical con man, and he has already been named in more than 50 lawsuits since becoming president, compared to just three filed against Obama at this point in his presidency.

Trump's fellow Republicans have already made it clear that they will not hold the president or his administration accountable. Like their wealthy donors — and like past Republican presidents — President Trump is understood to be above the law. By contrast, the hundreds of thousands of people in prison for nonviolent drug offenses, and the African-Americans incarcerated at rates six times higher than whites, have played by the rules. We know who wrote those rules.