Under Armour is betting high-tech “Made in U.S.A.” apparel manufacturing will revive its growth

The way apparel and shoes are made is changing rapidly, but innovation won't bring back manufacturing jobs 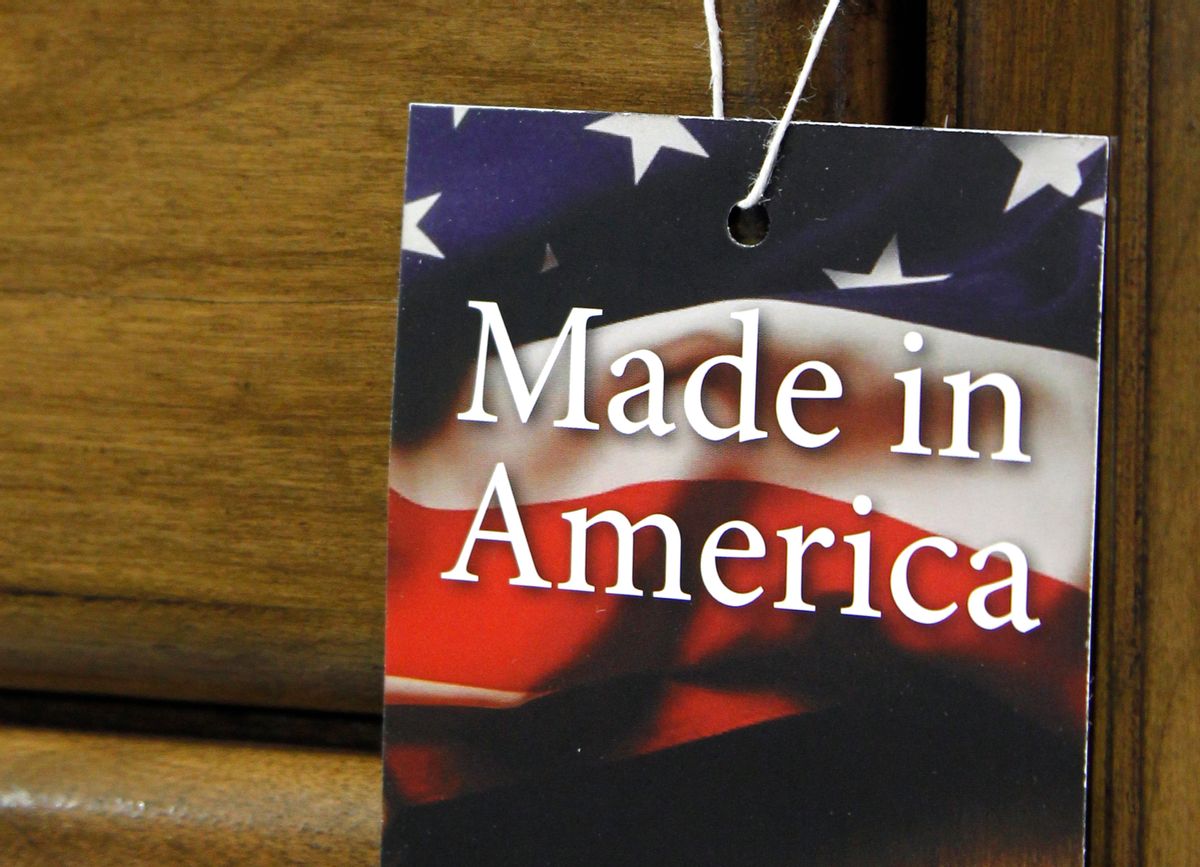 In this March 16, 2012 file photo, a "Made in America" tag hangs on a chest of drawers at a furniture factory in Lincolnton, N.C. The vast majority of Americans say they prefer lower prices instead of paying a premium for items labeled Made in the U.S.A., even if it means those cheaper items are made abroad, according to an Associated Press-GfK poll. () (AP Photo/Bob Leverone, File)
--

Tom Brady may have pulled off one of the greatest comebacks in NFL history in the fourth quarter of Sunday night’s Super Bowl LI, but the company that has an endorsement deal with the New England Patriots quarterback has seen better days. Under Armour, which has reaped a fortune from the “athleisure” trend of wearing gymwear as casual apparel, is worse off today than in 2010 when it signed Brady.

The 20-year-old Baltimore-based maker of running shoes, leggings and high tech materials has been experimenting with innovative manufacturing techniques in the hopes of chasing customers. Yet the company ended 2016 on a dismal note with lower than expected sales and profits -- Under Armour’s stock price has plunged nearly 30 percent since the start of the year thanks to “numerous challenges and disruptions in North American retail,” CEO and founder Kevin Plank said last week. Stiffer competition from Adidas, Lululemon and Nike also hurt the company’s performance.

Part of Under Armour’s “newness” push began last summer when it opened UA Lighthouse, a innovation, design and production hub at the company’s Baltimore campus. There, Under Armour experiments with 3-D printers for shoes, full-body scanners to measure people for custom-fit athletic wear and robotics to streamline the assembly process, all under a “Made in the U.S.A.” label called Arris Project. Company officials have said the apparel and shoe industries still rely on 100-year-old technology that’s long overdue for advancement. Last week, the company began selling Arris Project leggings and sports bras and has more product development in the works.

“As technology continues to be integrated into the manufacturing of apparel, I’m sure you will see smaller [U.S.-based apparel-making] operations emerge rather than large-scale production facilities,” said Steven Frumkin, Dean of the Jay and Patty Baker School of Business and Technology at New York City’s Fashion Institute of Technology.

Frumkin said he envisions a time not too far in the future where this technology could find itself be inside of malls or stores. Consumers could use the scanners to create digitally rendered 3-D images of their body shapes and then use those avatars in mobile apps to pinpoint the locations of the best-fitted garment items inside a retail outlet or a mall. In-store 3-D printing could be used to customize off-the-rack clothes or shoes by adding customer-configured garment items like buttons, sequins or stitchings.

While that kind of shopping experience is still years off, major apparel makers like Under Armour and Nike have been rapidly embracing these new manufacturing processes in their research hubs. Body scanners and software are being be used to make more precise standard measurements that are then assembled in a largely automated process.

What all of this new technology won’t do is bring back a bunch of apparel manufacturing jobs that have been lost in the U.S. since the 70s.

In the seemingly endless global quest for cheaper labor, manufacturers have long departed to lower-wage countries. Under Armour’s Plank is part of a group of 28 business leaders participating on President Donald Trump’s Manufacturing Jobs Initiative, an effort by the White House to come up with a strategy for growing U.S. factory jobs.

But if UA Lighthouse is part of the future of U.S. apparel design and production, then it’s more likely to follow the pattern we’ve seen in Silicon Valley: becoming a highly innovative industry that relies on relatively few highly skilled U.S.-based workers.

“We’re not going back to building factories with 10,000 people,” Frumkin said. “If you go back into the history of the [U.S.] textile and apparel industry, they didn’t invest in technology in the 70s, 80s and 90s; and I’m not saying that if they did we would have 12 million textile or apparel working in all kinds of factories today, but we could have saved some of what we lost.”

Frumkin said he’s optimistic that the country could create new jobs building the machines and software that underpin new apparel manufacturing technology, and help revive a smaller but more advanced U.S. apparel industry. This revival is not going to do much to help Trump create 25 million jobs over 10 years like he’s promised the country, but Under Armour is betting that it can innovate itself into a rebound from a dismal 2016.

Jobs Made In America Manufacturing President Donald Trump Under Armour