White House for sale: Trump team openly flouts ethics rules in the Nordstrom flap — because Congress will do nothing

Donald Trump and his aides promote Ivanka's business, confident that the GOP Congress will look the other way 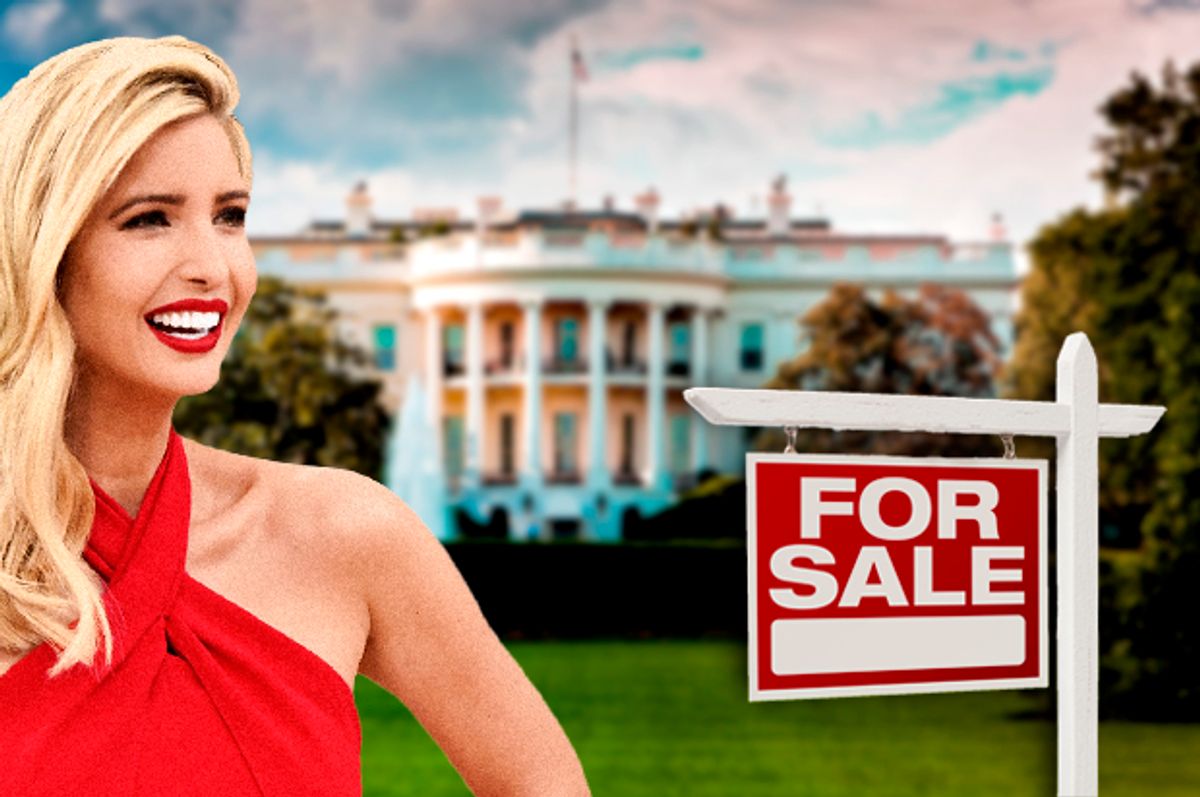 Do not purchase Ivanka Trump's products. I’m not really sure what the president’s oldest daughter sells or where it's sold, but that doesn't really matter. Don’t buy it. The reason to swear off all Ivanka Trump-branded items is straightforward: You don’t want to reward an openly corrupt White House.

Let’s run down the series of events that has unfolded over the past 24 hours or so. On Wednesday President Donald Trump fired off a tweet attacking the Nordstrom department store for its decision to stop carrying Ivanka Trump’s products. The president claimed his daughter — or, more precisely, his daughter’s business — was being treated unfairly by the retailer even though she is “a great person.” Nordstrom, for its part, made clear that the decision was driven by the fact that her merchandise wasn’t selling.

Regardless of why Nordstrom pulled the plug, Donald Trump’s behavior was massively unethical: He was using his official capacity as president to promote his daughter’s product line and attack a company for refusing to do business with his family. There’s also the fact that Ivanka has apparently not yet followed through on her promise to resign from her business interests ahead of assuming her nebulous role within the Trump administration.

When asked about Trump's tweet at Wednesday’s White House press briefing, press secretary Sean Spicer defended it by claiming that the president was merely standing up for his daughter, who was the victim of a political “attack” by Nordstrom. “He has every right to stand up for his family and applaud their business activities,” Spicer said, making it perfectly clear that the White House will not observe any division between the president’s duties in office and his business interests and that companies will be subjected to White House criticism for how they treat the president’s children.

That’s ridiculous enough on its own, but then White House adviser Kellyanne Conway cranked the dial to 11 on Thursday morning by endorsing Ivanka Trump’s products on television.

“Go buy Ivanka’s stuff!” Conway told Fox News from inside the White House. To review: This was a senior White House official using her taxpayer-funded position to exhort cable news viewers to purchase goods from a private business owned by the daughter of her boss, who is the president of the United States. That’s so flagrant that it violates federal ethics laws, which prohibit government employees from using their official position “for the endorsement of any product, service or enterprise.”

Conway and the rest of the Trump administration know they’re not supposed to do this stuff, and they’re at least somewhat sensitive to the optics of having a president with so many conflicting business interests. That’s why they cooked up a ridiculously inadequate plan to “separate” Trump from his business interests and announced it at a press conference using props: a few dozen manila file folders stuffed with (likely blank) sheets of paper.

They know this is all massively unethical and corrupt as hell: Why are they doing it so openly? The answer is clear: They are confident that they will not be subjected to any meaningful congressional oversight, regardless of how unabashedly they taint the executive branch with the business concerns of the president and his family. Republicans in Congress still need Trump to affix his signature to their plans for tax cuts, deregulation and Obamacare repeal, so it just won’t do to have anyone start asking uncomfortable questions about how Trump and his family are using the presidency to make money.

After Sean Spicer defended Trump’s Nordstrom tweet, the chairman of the House Oversight Committee, Jason Chaffetz, R-Utah, went on CNN to dutifully repeat the White House's talking points. “Most people can relate to the fact that a father, a doting father with very successful children, is going to look after those children and, you know, if he sees something going wrong, he's going to call it out,” Chaffetz said.

Prior to the 2016 election, Chaffetz was preparing to launch several years’ worth of investigations of Hillary Clinton's actions in office and was extremely concerned “as to whether State Department employees acted to benefit the Clinton Foundation in violation of executive branch ethics guidelines.” Now that he’s faced with the (Republican) president and his top aides using their official roles to promote Ivanka Trump’s business interests, Chaffetz can’t seem to find anything to become upset about.

Given that the Republican congressional leadership is content to let the president and his family cash in at taxpayer expense, the only way to stymie this absurd graft is simply not to give any of your money to Ivanka Trump. Don’t buy Ivanka's stuff. The civic health of our democracy demands it.