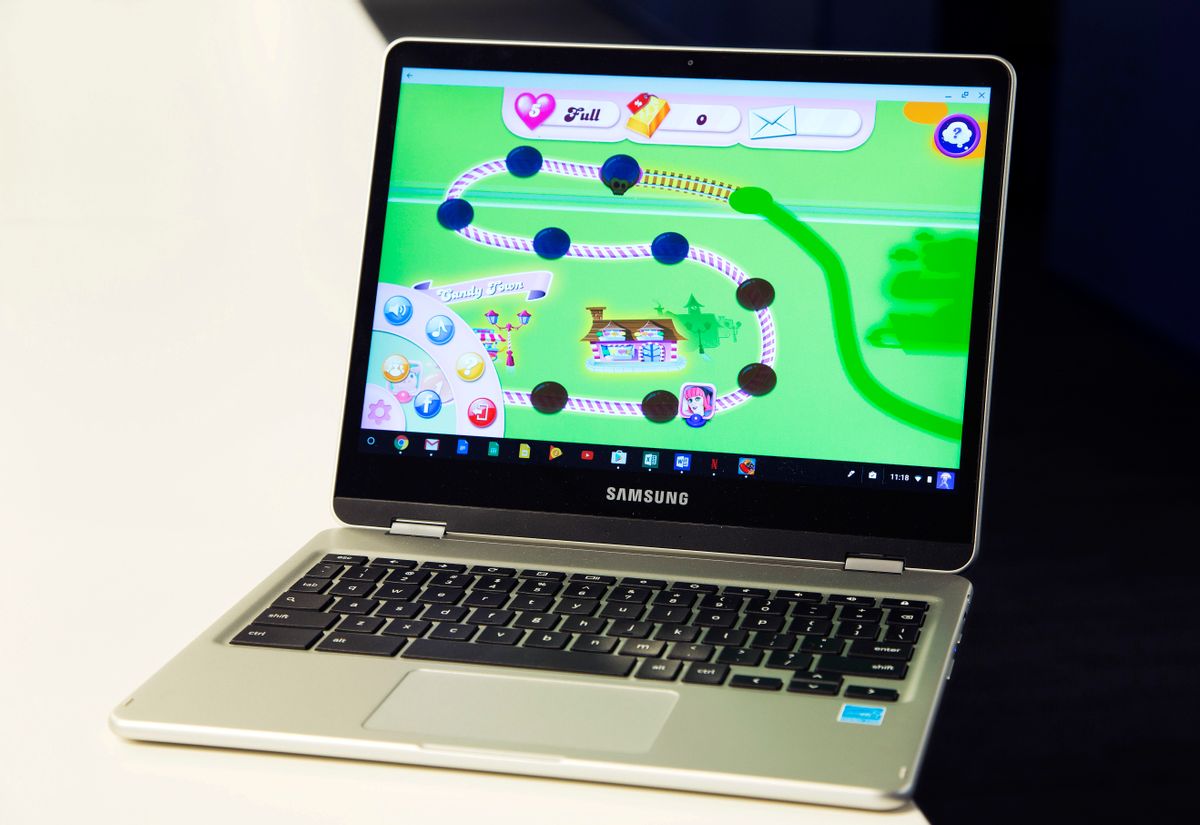 In this Feb. 8, 2017, photo, a Google Chromebook displays Candy Crush Saga in New York. Google Chromebook laptops are impractical for many people because they’re little more than expensive paperweights when they’re out of range of an internet connection. Yet they’ve defied expectations and made tremendous inroads in one of the least likely places: U.S. schools. (AP Photo/Mark Lennihan) (AP)
--

NEW YORK — The Google Chromebook, a type of stripped-down laptop, isn't a practical mobile device for many people — mostly because it basically turns into an expensive paperweight whenever it can't find a Wi-Fi connection.

Yet Chromebooks have defied expectations and made major inroads in an unexpected environment — U.S. schools.

In retrospect, that shouldn't be too surprising. Chromebooks are cheap and easy to manage, making them popular with budget-constrained schools with limited tech-support staff. And Wi-Fi is now common enough in U.S. schools and homes to make an internet-dependent device practical for students.

Google doesn't want to stop there. It's releasing new models in partnership with Samsung that are designed to appeal to a broader range of consumers. They have several tablet-like features, including a stylus, touch controls and a 360-degree hinge that allows you to turn the screen face-up. One starts selling Sunday for $449; a more powerful version comes out in April for $100 more.

Google and its manufacturing partners are trying to shed the Chromebook's perception as underperforming budget devices. But even with premium models, expanding beyond U.S. schools won't be easy.

For personal computers and tablets, Chromebook's share of the U.S. education market was 49 percent last year, up from 40 percent in 2015 and 9 percent in 2013, according to IDC figures released this week.

But education accounts for just 14 percent of the 110 million devices shipped in the U.S. last year — and Chromebooks make up just 9 percent of that broader total. Their numbers are also low abroad, even in schools.

Chromebooks use a lightweight operating system designed to get people online faster, without having to wait around for the computer to start up. Much of the heavy lifting on Chromebooks gets done on Google's remote servers, so Chromebooks themselves don't need fast chips or lots of storage.

Early on, though, that made Chromebooks seem cheap and underpowered, which "soured consumer expectations right off the bat," IDC analyst Linn Huang said.

Online storage for photos and documents online was much less common in 2011 when Chromebooks launched, so their limited local storage was initially unappealing. And the few apps available for Chromebooks didn't work offline, at least at the time.

But what constrains consumers can actually be liberating in education. Most kids don't need laptops on the bus or other locations where they can't connect to Wi-Fi. And they don't miss business software like Microsoft Office; Google's online apps for documents and spreadsheets do just fine for homework.

"What surprised us was how quickly it took off in education," said Kan Liu, who oversees Chromebooks at Google.

Apple's iPad was hot at the time, but Google sold the Chromebook on convenience. They're easier for classrooms to share; just sign in with a Google account, and a student's apps and documents instantly appear. Teachers also have online tools to lock down what apps and sites students can use.

And with models available for less than $200, schools can get a few Chromebooks for the price of an iPad or a rival laptop.

But Chromebook's success story in schools is largely an American one, and it's likely to stay that way. Gartner analyst Mikako Kitagawa notes that Chromebooks are useless in China because the device depends on Google services that aren't available there. And in emerging countries, where a budget laptop would be ideal, she said internet access isn't reliable enough.

Even in the U.S., the iPad is better for many creative tasks such as recording and editing movies. Students studying engineering, robotics and graphics won't be able to use Chromebooks to run the kind of specialized software that's available for Macs and Windows laptops.

"But that's not needed for 98 percent of our students," said Tracy Dabbs, coordinator of technology and innovation at the Burlington-Edison School District near Seattle.

Many school districts limit Apple and Windows computers for the students who specifically need them, then provide Chromebooks for the rest. McDowell County, for instance, has 5,500 Chromebooks, 1,200 iPads — and only 100 Macs and 200 Windows PCs.

Huang said some businesses are giving Chromebooks a second look, especially in retail, banking and other settings where people share computers.

But in many offices, the lack of business software such as Office is a major hurdle. Google's alternative lacks many advanced capabilities found in Office, and habits are hard to change.

Google is trying to make Chromebooks more palatable by letting them run Android apps designed for phones and tablets. It's testing this capability on a handful of Chromebook models, including the new ones from Samsung. That makes it possible to install Office, Adobe Photoshop and many apps on a Chromebook, though these tablet versions have limited features compared with versions for Macs or Windows laptops.

Chromebook Education From The Wires Google