“I’ll be there”: Charlie Haden was the Tom Joad of jazz, and his Liberation Music Orchestra lives on 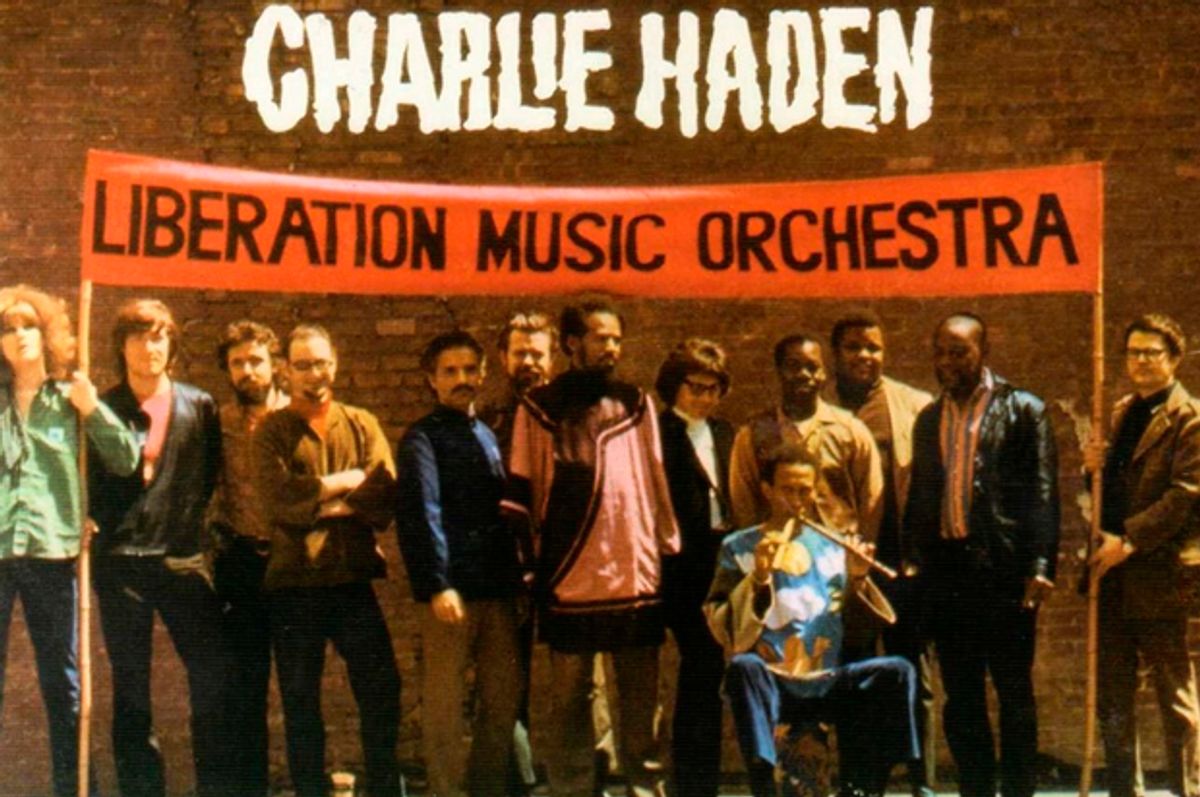 With attention to social justice ills firmly on the front burner, marchers, petitioners and social activists are making their opinions known in greater numbers than at any time in the past 40 years. You can count Charlie Haden’s Liberation Music Orchestra among those who are fired up and ready to go in giving voice to their concerns, and not for the first time.

For almost a half century, the 12-member jazz ensemble has used its music to address social justice and environmental issues, starting with its first album, "Liberation Music Orchestra," recorded in 1969 to protest racism and the war in Vietnam. What was behind LMO founder Charlie Haden’s zeal? Patriotism, according to Ruth Cameron Haden, the widow of the bandleader-composer-bassist, who passed away in 2014. “Charlie felt a tremendous love for this country, and through that love wanted it to do better. That’s what democracy is: See what could be better and work to improve it.”

Over the decades since making that first album, whenever Haden felt compelled to weigh in on a political situation, he’d reconvene the band, which has put out five recordings and gone on countless international tours since the ’60s. “We express our concerns when the circumstances warrant it, and our natural mode of expression is music,” the bassist declared in the liner notes of the LMO’s fourth CD, "Not In Our Name," released in 2005 in response to the invasion of Iraq.

The band’s fifth album, "Time/Life," which came out in the fall of 2016, was in the works when Haden died of the effects of post-polio syndrome. “We thought the Liberation Music Orchestra would be out of a job when President Obama was elected, but by then Charlie had decided to tackle the environment, which he’d been thinking about for a long time,” says Ruth Cameron Haden.

She is the LMO’s manager and the producer of "Time/Life," which contains two tracks Haden performed during his final appearance with the LMO in 2011, plus three other pieces recorded last year. Haden’s longtime collaborator pianist-composer-arranger Carla Bley wrote the title track in his honor after hearing of his death. "Time/Life" reached the top 10 of NPR’s 2016 jazz critics poll, with jazz journalist Francis Davis stating, “even the prettiest of ballads is delivered with such aching purpose and lyrical generosity, I swear this music could make America whole again, if enough people heard it.”

From the start, Haden worked with Carla Bley to build a repertoire that includes their original compositions plus traditional hymns, protest songs, and anthems from countries around the globe. “Amazing Grace” and a brass arrangement of Samuel Barber’s “Adagio” are in the band book, alongside works by Bill Frisell, Pat Metheny, Miles Davis, Pete Seeger and more. There’s at least one piece that wouldn’t be out of place on the soundtrack of a Fellini film, Americana-inflected tunes that evoke small town marching bands, and a rendition of "America the Beautiful" that gives the Ray Charles version a run for its money on the soulfulness scale. The LMO can sound as raucous as a street parade or as tender as a lullaby. Improvisation is key, but so is feeling.

Haden and his musical co-conspirator Bley shared deep roots in the jazz avant-garde. But as a working musician for virtually all of his 76 years, Haden’s influences and experiences are so diverse as to be film-worthy: He’s the subject of a 2010 documentary, "Rambling Boy." Born in Shenandoah, Iowa, by age 2, little Charlie was singing on his family’s country music radio show and grew up surrounded by icons of country music and Grand Ole Opry. “As a child, he literally sat on Mother Maybelle Carter’s knee when she visited the Haden family; he has that part of America in his blood,” says Cameron Haden, who often refers to her late husband in the present tense.

In his mid-teens, Haden started playing bass and his focus shifted to jazz. He moved to L.A., where he took part in the birth of free jazz as a member of Ornette Coleman’s quartet on the groundbreaking album "The Shape of Jazz to Come." He went on to play with the likes of guitarist Pat Metheny, who shared his Ozarks roots, as well as Keith Jarrett, Jan Garbarek, Hank Jones, Fred Hersch, Chet Baker and scores more. As a bandleader, Haden received numerous Grammy nominations, including two for LMO albums, three wins and a lifetime achievement honor. He founded the renowned CalArts jazz program, and was recognized as a Jazz Master by the National Endowment for the Arts.

Haden promoted social justice from the concert stage, including in 1971 while appearing in Coleman’s band in Cascais, Portugal, where he dedicated his composition “Song for Ché” to “the black people’s liberation movement in Mozambique and Angola.” After the show, Haden was detained and interrogated for a couple of days by dictator António de Oliveira Salazar’s police, for expressing support for the independence of Portuguese colonies in Africa. The experience didn’t deter the bassist from his social activism.

Under Cameron Haden’s guidance, it’s unlikely that the LMO will become a ghost band playing rote versions of tunes that have lost their meaning for players and audiences alike. “I don’t want the music, the spirit, and the history to get lost,” she says. “Charlie handpicked the musicians, they have a great rapport, and are passionate about the music and mission. We have a deep repertoire of Charlie and Carla’s music that continues to be relevant. The music will continue to sound fresh because each musician is a master of improvisation, and improvisation makes the music of the moment.”

The band has performed an array of interesting gigs recently, including pre-election dates in Chicago and New York, and an environmental discussion panel and concert tribute to Haden at Manhattan’s recent Winter JazzFest. The LMO wrapped up the sold-out event with Bley’s arrangement of “We Shall Overcome,” a fitting end to the final concert of the six-day, social-justice-themed music fest.

The dawn of the Trump era guarantees that the ensemble is unlikely to run out of topics and issues to comment on, and it’s a safe bet the LMO will have something to say and the perfect music to say it. Cameron Haden believes that’s what her late husband would have wanted. She imagines Charlie would be like Tom Joad, the protagonist of "The Grapes of Wrath," one of his favorite books and movies, declaring “I’ll be there” whenever social injustice comes to the fore.