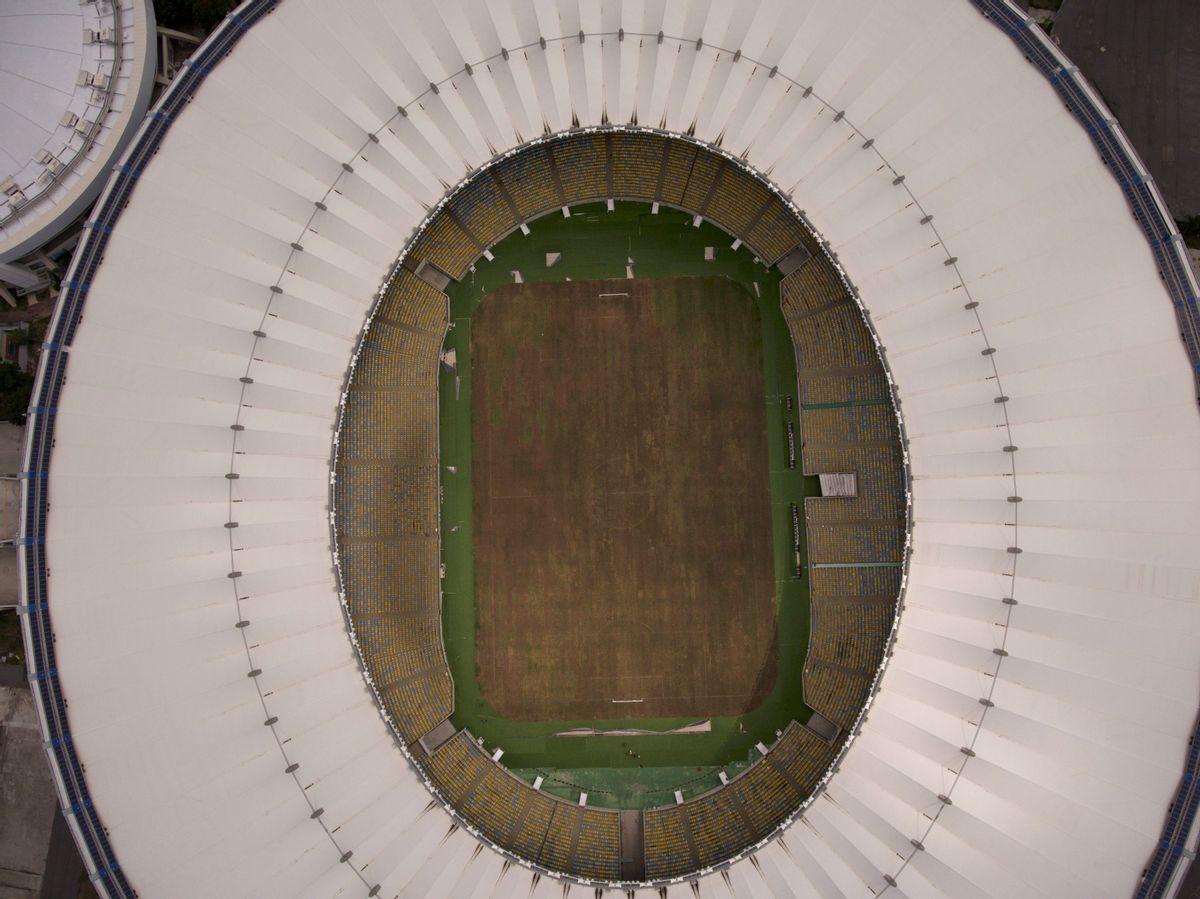 This Feb. 2, 2017 photo shows Maracana stadium's dry playing field in Rio de Janeiro, Brazil. The stadium was renovated for the 2014 World Cup at a cost of about $500 million, and largely abandoned after the Olympics and Paralympics, then hit by vandals who ripped out thousands of seats and stole televisions. (AP Photo/Mario Lobao) (AP)
--

Rio organizers still owe creditors about $40 million. Four of the new arenas in the main Olympic Park have failed to find private-sector management, and ownership has passed to the federal government. Another new arena will be run by the cash-strapped city with Brazil stuck in its deepest recession in decades.

The historic Maracana stadium, site of the opening and closing ceremony, has been vandalized as stadium operators, the Rio state government, and Olympic organizers have fought over $1 million in unpaid electricity bills. The electric utility reacted by cutting off all power to the city landmark.

There are few players for a new $20 million Olympic golf course, and little money for upkeep. Deodoro, the second-largest cluster of Olympic venues, is closed and searching for a management company.

The state of Rio de Janeiro is months late paying teachers, hospital workers, and pensions. The state also reports record-breaking crime in 2016 in almost all categories from homicides to robbery.

"During the Olympics, the city was really trying hard to keep things together," said Oliver Stuenkel, a Brazilian who teaches international relations at the Getulio Vargas Foundation, a Brazilian university. "But the minute the Olympics were over, the whole thing disintegrated."

The Olympics — and to a lesser extent the 2014 World Cup — showcased the reality of Rio, a city romanticized for its sprawling beaches, annual Carnival celebration, and sensual lifestyle.

It also exposed the city's crime, environmental contamination, and corruption.

Some building projects connected to the Olympics and World Cup have been tied to a probe which has led to the jailing of dozens of politicians and businessmen for receiving kickbacks in Brazil's largest corruption scandal.

Three politicians who were instrumental in landing and organizing the Olympics — former Brazilian President Luiz Inacio Lula da Silva, former Rio governor Sergio Cabral, and former Rio Mayor Eduardo — have been under investigation. Cabral, an early promoter of the Olympics and World Cup, has been jailed on corruption charges.

"The Olympics gave people a better sense of the difficulties Brazil faces," Stuenkel said. "Maybe not a better or worse image, but more rounded."

Sidney Levy, the chief executive officer of the Rio organizing committee, tried to run the games with only private money, and almost succeeded. His $3 billion operating budget — the budget for running the games, not building the infrastructure — was frugal by Olympic standards. At the last minute, he had to ask for a 250-million-real bailout — $80 million — from the city of Rio and the federal government to run the Paralympics.

Eventually, he got only 100 million reals ($30 million), and the shortfall has left organizers owing creditors millions.

"I could call the president of the country, and the call was taken," Levy said. "But try it today. I could call the IOC and everybody. But now people have other things to handle. We are no longer a priority."

Levy said organizers probably lost about $200 million in income during the run-up to the games as sponsors backed out of expensive deals as the recession kicked in.

Levy said he has not asked the IOC to help pay debts, but acknowledged the Olympic body came up with millions in advance money several times during the run-up to the games.

"The whole thing was too painful," Levy told The Associated Press. "We never really enjoyed the games, themselves; 2016 was just extremely hard. It's like we were climbing Everest, and ice is falling on your lips, and you are not seeing."

The Olympic Park is a ghost town; sleek sports arenas without events, deserted before they were even broken in, and well-tended flower gardens, free from pedestrian wear-and-tear.

"The arenas are beautiful," Wagner Tolvai said, walking inside the park with his girlfriend Patricia Silva. "But it's all abandoned, everything has stopped. Nobody is here."

He likened the 2.5 billion real ($800 million) park to a new shopping mall "without stores, or customers." The park is only open on weekends, and there's not much to do but walk, pedal a bike, or look for shade.

Four permanent arenas are being run by the federal government. Among them is the Olympic tennis center, which was used earlier this month for a one-day beach volleyball tournament. This in a city with endless sand and beaches.

Two temporary venues for swimming and handball have yet to be dismantled. The exterior of the swimming venue is falling apart and many translucent tapestries that covered the outside of the building are frayed or falling to the ground.

The warm-up pool, which was covered during the games, is filled with muddy, stagnant water.

Away from the park, the famous Maracana stadium has drawn the most attention. It was renovated for the 2014 World Cup at a cost of about $500 million. It was largely abandoned after the Olympics and Paralympics, and then hit by vandals who ripped out thousands of seats and stole televisions.

"The Maracana is the biggest symbol of the way the games were managed," said Mauricio Santoro, a political scientist at Rio de Janeiro State University. "The vast majority of people in Rio will never go to the golf course, or the Olympic venues. But the Maracana is different. It's the jewel of the crown."

Up the road from the Olympic Park, the $1 billion Athletes Village — it housed about 10,000 athletes — is fenced off and empty. The developer says it has sold only 260 of the 3,604 apartments — about 7 percent.

Transportation projects driven by the Olympics look better than the sports venues.

The games led to a subway line extension, though at the reportedly inflated price of $3 billion. They also produced a high-speed bus network, a light-rail line, and a pedestrian-friendly, renovated port area. Rio's international airport also got a makeover.

But many of the improvements benefit mostly the wealthy south and west of the city.

"The gains were unevenly spread across the city," Stuenkel, the political scientist said.

"They have a society that works pretty well already," he said. "They don't have to prove anything to anybody."

Tokyo will face higher costs than Rio, and organizers are already looking for places to cut.

Levy suggested reining in sports federations, which all want five-star treatment. He used an example from the equestrian events.

"They wanted 15 horse ambulances," Levy said. "We offered nine. In the end, the right number was four. The magic of the games doesn't come from these things."