Protecting abortion clinics from violence and intimidation is now Jeff Sessions' job. Can he be trusted to do it? 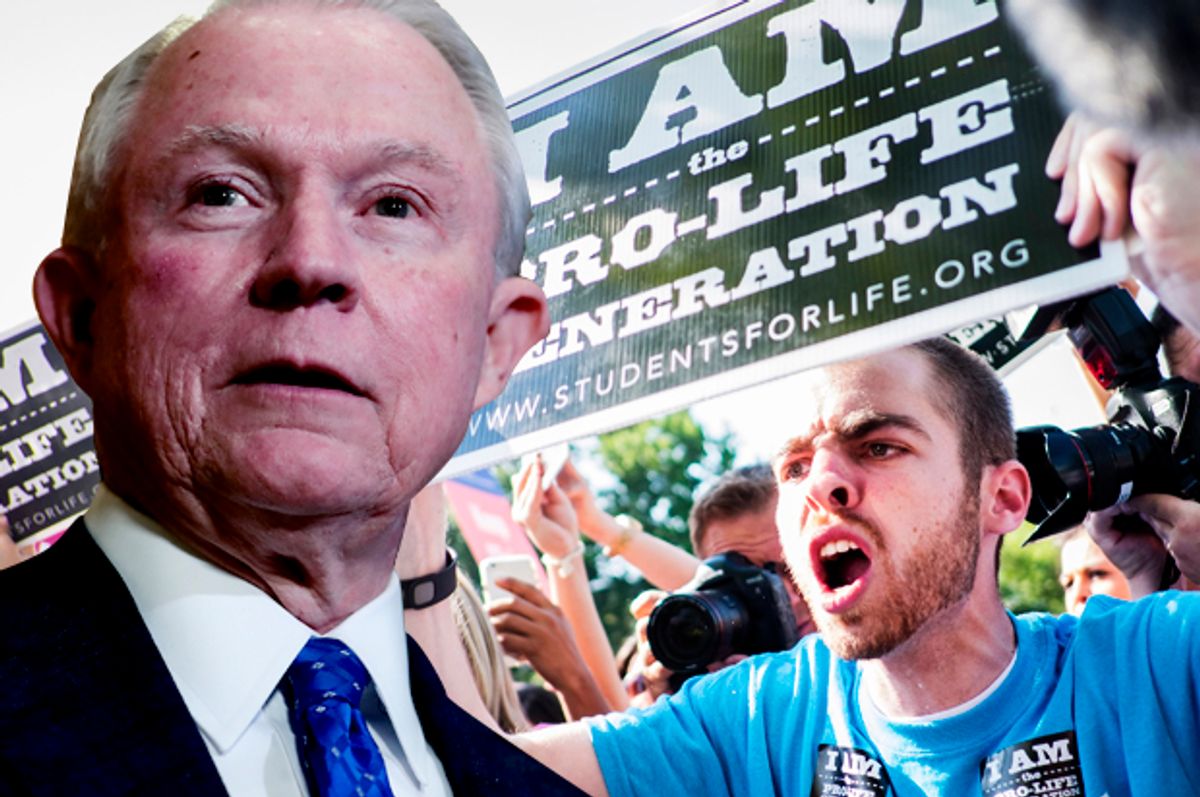 The confirmation of Jeff Sessions as attorney general has widespread ramifications that are genuinely hard to wrap one's mind around. Most of the attention has rightly been paid to Sessions' unsavory history when it comes to racial issues, such as his history of undermining black Americans' voting rights or his longstanding hostility toward nonwhite immigrants.

But another group of Americans is sounding the alarm over the Sessions confirmation: Abortion providers are worried about whether the new attorney general will protect the safety of clinic workers and patients.

Terrorizing abortion clinics is a federal crime, which is something the Department of Justice handles. Unfortunately that means that Sessions, who is deeply anti-choice, will be in charge of enforcing the laws that protect clinics and their patients.

“We have very serious concerns that he will not make enforcing federal laws that protect abortion clinics a priority," said Vicki Saporta, president and CEO of the National Abortion Federation, over the phone.

By working with clinics and monitoring the internet, the federation curates a weekly report on the level of vitriol and outright threats being aimed at abortion providers. The federation then turns over that report to the National Task Force on Violence Against Health Care Providers, started by former attorney general Janet Reno in 1998 and drawing on staff from various federal law enforcement agencies to fight anti-choice terrorism.

The Department of Justice has this authority because former president Bill Clinton in 1994 signed the Freedom of Access to Clinic Entrances Act, making it a federal crime to use physical violence, obstruction or threats to keep women from receiving legal abortion care. The act was passed in response to clinic-door blockades and escalating anti-abortion violence.

The problem is that the attorney general holds considerable power over whether this task force receives the attention and resources necessary to do a good job.

Under president Clinton, the DOJ prosecuted 10 people a year on average for criminal  violations of the Freedom of Access to Clinic Entrances Act. With the presidency of George W. Bush, interest in enforcing the act seemed to lag; the number of criminal prosecutions dropped 75 percent, to just two people a year on average. Plus, Clinton's DOJ filed 17 separate civil cases under the act in five years, but Bush's Justice Department filed just one such case in eight years.

“Oftentimes enforcing FACE isn’t a priority in Republican administrations, but I think under Jeff Sessions, it’s going to be worse," Saporta said. "It is clear he not only has a strong anti-abortion record, but a specific record of favoring anti-abortion extremists over abortion providers.”

It isn't just that Sessions has an anti-choice voting record. He specifically  has a record of voting against efforts to protect clinics from violence. For instance, in the Senate he repeatedly voted against Sen. Chuck Schumer's proposed amendment to various bankruptcy bills that would have blocked anti-choice terrorists from manipulating bankruptcy laws to avoid paying court-levied fines for things like destruction of property.

Justifying his vote against this amendment, in 2000 Sessions accused Democrats of singling out anti-choice arsonists and vandals "because they are religious." He characterized the amendment as an effort to derail the bankruptcy bill "over this odd idea that out of all the activities in America, if you get sued by an abortion clinic, you cannot file for bankruptcy."

Sessions also voted against a 2015 bill that would have funded better security for abortion clinics. Such security is more necessary than ever due to a recent escalation in clinic violence, such as the November 2015 attack by an anti-abortion fanatic on a Colorado Springs, Colorado, Planned Parenthood clinic, in which three people were killed (including one police officer) and nine others injured.

The election of Donald Trump isn't helping the problem of violence and harassment, despite the fact that Trump rarely mentioned the issue of abortion during his presidential campaign. Saporta said there has been a threefold increase in alarming commentary about abortion providers online since the November election: “It quite frankly surprises me."

Saporta also pointed out that anti-choice Republicans now control the White House and Congress and are virtually certain to add another justice on the Supreme Court. They now have more legal options to undermine abortion access, but this has apparently not quelled the tide of threats and intimidation.

It may just be that anti-choice extremists see no reason to dial it down, since they believe Sessions has their backs.

“We could not be happier about the selection of Sen. Jeff Sessions as the next Attorney General," said Troy Newman, the president of Operation Rescue, in a November press release. Newman is famous for calling for the killing of doctors who provide abortion services and for running a multiyear targeted harassment campaign  against Wichita, Kansas, physician George Tiller: In 2009 the doctor was murdered by an anti-abortion activist at a church service.

But as Miranda Blue at Right Wing Watch pointed out, that disavowal can be viewed as suspect, since Sessions "actively promoted Newman’s work as a founder of the Center for Medical Progress, the organization that has been pushing discredited smears against Planned Parenthood in an effort to undermine legal abortion."

Statistical evidence suggests, furthermore, that lackadaisical law enforcement is a major factor when it comes to clinic violence.

Despite all this, many abortion providers are determined to carry on.

"Despite the challenges that Jeff Sessions’ confirmation as Attorney General will pose, we must remember the word of Dr. Martin Luther King Jr., ‘The time is always ripe to do right,'" said Dr. Willie Parker, who provides abortion in clinics in Mississippi and Alabama, in a press release for Physicians for Reproductive Health. "It is now more important than ever that physicians continue to fight for the right to safe, comprehensive reproductive health care.”