A field guide to protesting in the Trump era: Lessons from the redwoods protectors 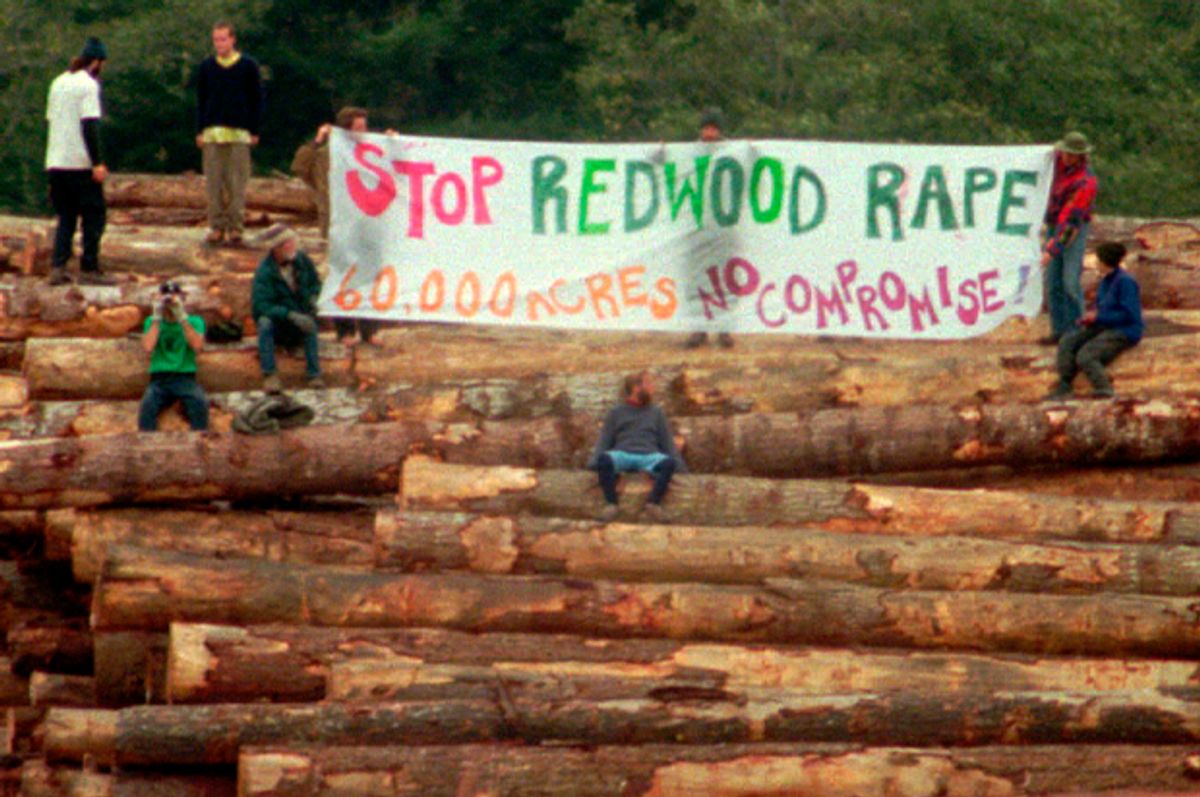 Anti-logging protesters hold up a sign as they stand on lumber inside the Pacific Lumber facility in Carlotta, Calif., Tuesday morning, Oct. 1, 1996 (AP/Paul Sakuma)
--

Protests have erupted across the United States and the world since the inauguration of the 45th president of the United States. To date the protests have been largely spontaneous and decentralized. Senator Elizabeth Warren, D-Mass., nicely articulated the broad sentiments of many protesters when she told the Women’s March on Washington: "Yesterday, Donald Trump was sworn in as president. That sight is now burned into my eyes forever. And I hope the same is true for you — because we will not forget. . . . We will use that vision to make sure that we fight harder, we fight tougher, and we fight more passionately than ever . . . for all of America."

Because of the breadth of protesters’ concerns, organizers are rightly asking what's next. How do we direct the energy of the protests and rallies? What types of changes do we want? How can those activists undermine a regime led by a man who tweeted in March 2013 that “those who have the gold make the rules”? At times like these, we need historical models to draw from, and current organizers need look no further than the redwood forests of California.

More than 30 years ago, residents on California's North Coast constructed one of the best modern examples of how to effect transformative political and economic change. Groups of rural northern Californians organized themselves to resist a logging regime, dominated by large timber corporations and a supplicant state government, that had utterly decimated the forests of gigantic redwoods. Indeed, by the early 1980s, nearly 90 percent of the giant redwoods standing in 1850 had been cut down, and much of that forest had been clear-cut in recent decades. By 2009, though, California had reformed its logging rules, protected a sizable portion of the remaining giant redwoods, and had evicted several of the multinational corporations that had wreaked the most havoc since World War II. The activists did not achieve nearly all they had hoped for, but they prevented the worst from happening and they changed the course of Californian and American environmental politics.

Those North Coast activists also offer an alternative to Trumpism for resisting globalization and corporatism. They, like today’s protesters, communicated a broad yet penetrating critique of an economic and political system hostile to their values. Even the language was similar. One of the central opponents of the North Coast environmentalists was Charles Hurwitz, owner of the largest old-growth redwood logging company in the world. Like Trump, when asked about his plans for the forest and his timber company in 1986, Hurwitz told workers and the community that, “he who has the gold rules.” Their organizing model of direct action, litigation, protest, and advocacy is an excellent resource for people and organizations that are working to resist Trumpist policy.

How did those rural Americans on a far-flung corner of the continent, at ocean’s edge, resist the tides of globalization and industry-dominated politics? By being willing to throw themselves into any and every possible crevice in the system they worked to dismantle — sometimes literally. Earth First! activists such as Greg King and Alicia Littletree sat in giant trees to prevent logging, sometimes for months or years at a time. Other activists, including Robert Sutherland (aka The Man Who Walks in the Woods) and Sharon Duggan, prepared lawsuits challenging the government and timber companies’ prerogatives to destroy old-growth forests. Still others, like Darryl Cherney and Judi Bari, organized mass rallies and guerrilla theater to draw attention to the plight of the redwoods. Finally, the North Coast activists cultivated the support and evidence of scientists, regulators and allied legislators such as the late Tom Hayden, Congressman Dan Hamburg and former San Francisco Mayor Willie Brown.

Those bold and disruptive actions combined to force the corporate-friendly governments of California and the United States to accommodate some of the activists' demands. The direct actions in the woods delayed specific logging threats in the most vulnerable places, where the trees are more than 1,000 years old and grow to upwards of 300 feet tall. During the delays, the courts officially halted logging in those endangered forests. The rallies and protests irritated the logging executives and politicians, generating press coverage that expanded the notoriety of the Redwood Wars and the national constituency of redwood sympathizers.

Eventually, President Bill Clinton and Hurwitz embarked on a series of negotiations to save thousands of acres of the last remaining unprotected ancient redwoods. The timber company and the executive branch wanted desperately to end the perpetual gridlock so they could get on with other business. The final deal was not close to perfect: It didn’t save enough of the giant redwoods, nor did it provide enough protection for the broader redwood forest. However, the near-daily activism for more than 20 years demonstrated that small groups of people can alter the direction of a hostile system, and it demonstrated that the perverted Golden Rule doesn’t always rule.

For the activists, the Redwood Wars were no cakewalk, but they worked hard and they developed a strategy to gunk up the machinery of logging just enough to force the powerful to take heed. And just like today, some people ridiculed the activists when they showed up at Department of Forestry meetings in costumes, playing violins and singing songs mocking timber executives. When they blocked logging roads or chained themselves to trees, some Californians cast the activists as illegitimate, as did one rancher in 1989 when he told the press the activists “get on welfare and grow pot and make good money at it. I think the buggers ought to go get real jobs.” Yet the activists continued to press their demands, continued to open themselves to new strategies and tactics, and continued to resist. Many of them are still alive and resisting industrial logging today, and many of them are resisting Trumpism as well.

Protest works. It can infuriate and frustrate those who crave total power. It is what drove Nixon deeper into paranoia and criminal behavior, and ultimately led to his disgrace and removal from power. Protest works even more thoroughly as one part of a sophisticated, diverse and multifaceted effort to disrupt and enforce our moral and legal values. The courts, public opinion, working the bureaucracy, direct action and disrupting massive egos have proven to be an effective and comingled set of tactics for those without much official political power — especially when the efforts are bold and persistent.

Darren Speece is the author of "Defending Giants: The Redwood Wars and the Transformation of American Environmental Politics" (University of Washington Press, 2016). He is the Assistant Dean of Students at Sidwell Friends School where he teaches courses on American History and Global Environmental History. Follow him @darrenspeece.