An end to bromance: Russia's in love with Trump, right? Not as much as you think

No more love story: Vladimir Putin's government has no illusions about Donald Trump, and doesn't trust him 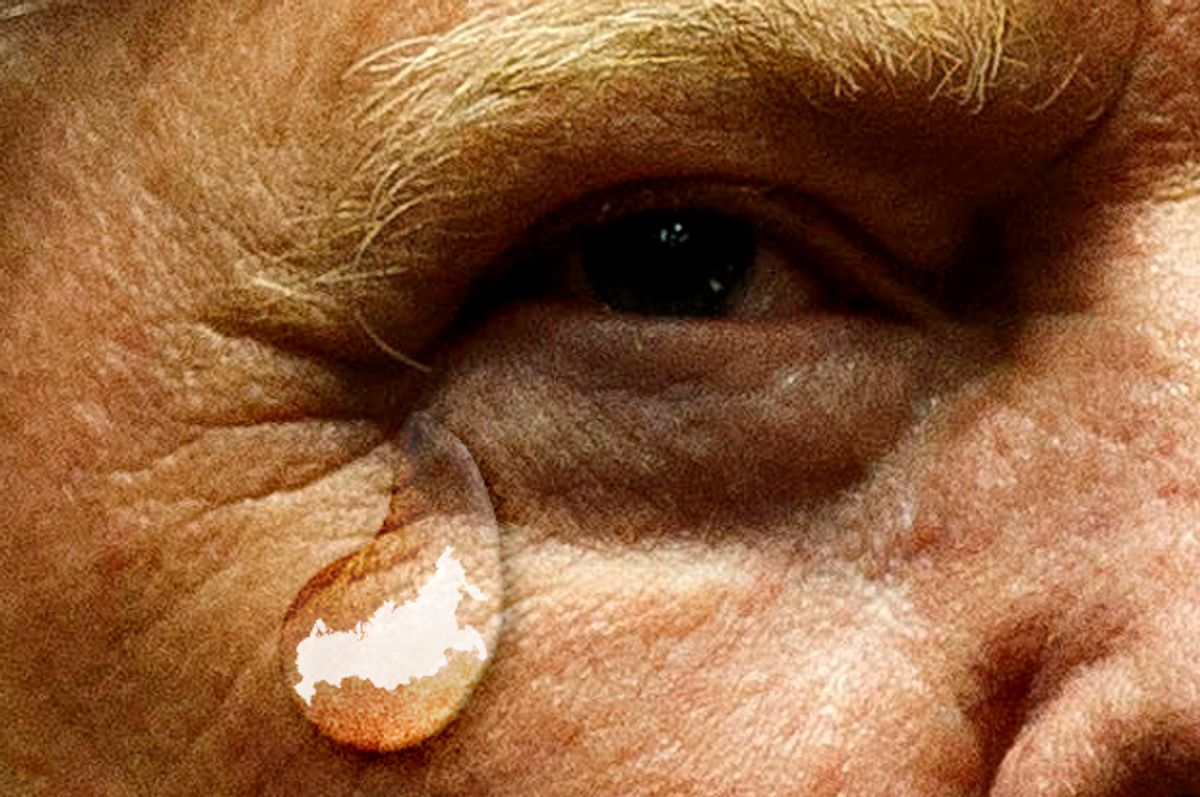 The reporting on Russia’s reaction to (and alleged role in) Trump’s victory has been simplified and one-dimensional. It has sent otherwise intelligent people into a tailspin of conspiracy theories and, worse, a kind of new McCarthyism.

Things really went off the deep end when people began genuinely speculating that Trump is the product of a decades-long Kremlin plot to put a puppet in the White House.

Mistranslations of Vladimir Putin’s comments about Trump haven’t helped. When Putin called Trump "bright" or "colorful" -- as in, a colorful character -- it was translated as "brilliant." Somehow, Trump took this to mean Putin had called him a genius and then went around like a giddy little boy repeating the lie during stump speeches.

Reports on Russia’s apparently unbridled joy over Trump’s win are 10 for a penny, but the hand-wringing over the supposedly treasonous relationship usually leaves out two important points: First, the declassified intelligence report presented to prove that Russia in some way influenced the election presents a weak case and almost no evidence. Second, and more important, despite popular belief the Russian government is not nearly as keen on Trump as some factions in Washington would have us believe.

It is true that there are many Russian officials who do see Trump as the new messiah. Certain Russian TV personalities spent a year fawning over his every utterance. Some Kremlin supporters, including elected officials, actually held a party to celebrate his win in the Russian state Duma.

It’s also true that the Russian government has openly and enthusiastically welcomed Trump’s comments about improving the relationship with Moscow. But the reality is that the expectations of Russian officials are very low and they’re under no illusions about the new U.S. president.

The Kremlin likes predictability, and Donald Trump is anything but predictable. He’s an impulsive hothead. Some Russian analysts and experts actually believed the Kremlin would have preferred Hillary Clinton to win, because the devil you know is generally better than the devil you don’t — but that kind of analysis was less likely to gain traction in the media.

The Kremlin knows Trump talks out of both sides of his mouth and that campaign rhetoric isn’t policy. They also know that even if Trump is sincere about a new détente, it doesn’t mean the Republican-led Congress is on board. (Spoiler alert: It's not.) Perhaps most worryingly for Russia, Trump is now in a position that requires him to prove he is no Kremlin stooge.

What’s more, Moscow officials see Trump’s worrying personality traits as clearly as do the rest of us. When Trump reacts with childish Twitter tantrums over comedy sketches on "Saturday Night Live," they don’t see a particularly stable man. They see an easily angered man who is prone to lashing out in order to protect a fragile ego.

Given that it’s been only a matter of weeks since Trump took office and that he has been focused on domestic policy, the Kremlin is still in "wait and see" mode, but the Russians have already been given a few reasons to worry.

First there was incoming secretary of state Rex Tillerson, who took a harsh stance on Russia during his confirmation hearings, arguing that a “resurgent Russia” posed a danger to the world. Then there was Kellyanne Conway, who claimed, during an interview on CNN, that Barack Obama had been too “weak” on Russia and said Trump’s policies would “go against Russia’s economic and military interests.” Then U.N. ambassador Nikki Haley made a statement condemning Russia over the ongoing war in eastern Ukraine, which led one Russian senator to quip that it could have been Obama’s ambassador, Samantha Power, who wrote Haley's speech.

None of this is much different from anything the Obama administration was saying, so either this is all some kind of deliberate good-cop, bad-cop strategy or Trump and the team are not on the same page when it comes to Putin and Russia.

Trump himself has started tweeting threats at Russian allies Iran and China, prompting Konstantin Kosachev, chairman of the International Affairs Committee of Russia’s upper house, to express concern over Trump’s “bellicose” and “alarming” rhetoric on Iran. Kosachev predicted that this, along with Trump’s “anti-Chinese initiatives,” could have a “strong negative influence” on Russia-U.S. relations.

The only offer Trump has publicly floated to Russia so far has been the idea that sanctions could potentially be lifted in exchange for a new arms reduction deal. That offer has already been rejected by Putin spokesman Dmitry Peskov. There’ll be no exchange deal, the Russians say. As far as they’re concerned, they didn’t initiate sanctions and won’t be negotiating to get rid of them.

Peskov was also quick to criticize Trump’s  recent characterization of Iran as the world's No. 1 terror state. It’s no secret that Russia and the U.S. have “diametrically opposed views” on the topic, he said. Deputy Foreign Minister Sergey Ryabkov went further, warning that any attempt to revise the Iran nuclear deal would be an inadvisable and dangerous move, like “opening a Pandora’s box.”

During Trump's first call with Putin, he apparently shot down the Russian president’s suggestion to extend the START nuclear treaty signed under the Obama administration. According to a Reuters source, Trump had to pause the call with Putin to ask his aides to explain what the START deal actually was. He then (reportedly) told Putin it was another one of Obama’s “bad” deals and said that it had favored Russia.

The latest indicator that Trump won’t go easy on Russia came this past week, when the White House confirmed that Crimea-related sanctions would not be lifted until Moscow returned the Black Sea peninsula to Ukraine. This will come as no surprise to the Kremlin. To outsiders this might look like a simple exchange: Give it back and sanctions end. But from Moscow’s perspective, sanctions are preferable if the only other choice is to return the Crimean peninsula to control of a hostile government in Kiev. The genuinely high levels of public support for Putin in Russia and among the large Russian-identified population of Crimea for Putin would make any such surrender an act of political suicide.

Trump is unlikely to try and make nice with Russia more than once, and the Kremlin is under no illusions that in the long haul he will be some kind of "pro-Moscow" president. If Trump doesn’t get his way with Putin the first time around, all bets are off. He can’t afford to look soft on Russia (particularly given all the accusations and innuendo floating around), and Putin certainly won’t want to appear to have gotten a bad deal either.

Maybe when the first Putin-Trump meeting finally happens, they truly will get on wonderfully and we can all dance off into the sunset together. If they don’t, the alternative could be disastrous.

That possibility has been ignored in favor of a Cold War conspiracy narrative that Putin stole the election from Hillary Clinton over a personal grudge, and now secretly controls the White House. It’s time to abandon all the wild talk about Comrade Trump and move on to more sober and realistic analysis.