Hitting Trump where it hurts: The satire troops take up comedy arms against Donald Trump

"Laughtivism" is playing a key role in the resistance to Trumpism. Here’s why the satire rebellion matters 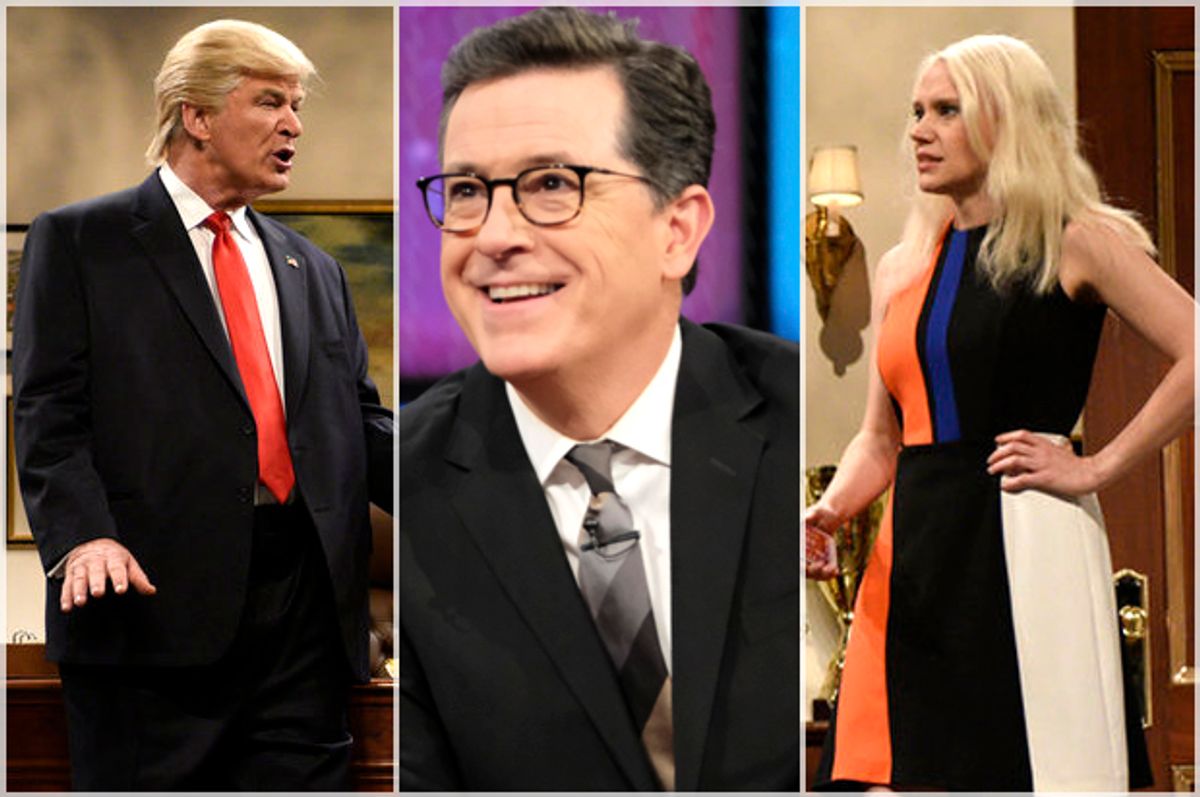 Nineteen years ago a small group of nonviolent, pro-democracy protesters, Otpor, decided to play a public prank on Serbian dictator Slobodan Milosevic. The protesters took an oil barrel, taped a picture of Milosevic to it and set it up in the middle of Belgrade’s largest shopping district. Next to it they placed a baseball bat. They then moved away to a spot where they could anonymously watch what happened next.

As Otpor co-founder Srdja Popovic recounted, “Before long, dozens of shoppers lined the street, each waiting for a chance to take a swing at ‘Milosevic’ —  the man so many despised, but whom most were too afraid to criticize.”

After 30 minutes the police arrived, but they were at a loss for how to stop the mockery of the dictator. The culprits were nowhere to be seen and those wielding the bat were just innocent shoppers. So the police decided to arrest the barrel. Popovic explained that the image of the two policemen dragging the barrel to their police car went viral: “Milosevic and his cronies became the laughing stock of the nation, and Otpor became a household name.” A small group of students grew to 70,000. Milosevic’s days were numbered.

Fast-forward to the present where in the United States we have recently inaugurated the Donald Trump administration in what is ostensibly a democracy but that increasingly feels like an authoritarian regime. As was the case in Serbia under Milosevic, we are able to watch the role that comedy can play in unsettling a despot. In Serbia a small group of laughtivists sought to use humor to bring down a dictator; in America we already have a full-blown satire rebellion.

Last week comedian Melissa McCarthy impersonated Trump’s press secretary Sean Spicer on "Saturday Night Live." It was one of the most potent impersonations yet of the Trump regime. The clip went viral and was seen by more than 20 million viewers in less than one week.

Even better, though, the impersonation has apparently rattled the White House. Politico reported, “Trump’s uncharacteristic Twitter silence over the weekend about the ‘Saturday Night Live’ sketch was seen internally as a sign of how uncomfortable it made the White House feel.” It further reported that Trump is especially unhappy that a woman impersonated Spicer. Word is that Spicer may be at risk of losing his job.

That same week Jon Stewart appeared on “The Late Show with Stephen Colbert” for the first time since the inauguration. In a mock Trump impersonation, Stewart claimed that in only 11 days and after 20 executive orders we were all fatigued: "The presidency is supposed to age the president, not the public." After revealing that one of Trump’s forthcoming executive orders was to make “bullshit” the official language of the United States, Stewart ended on a somber note.

"We have never faced this before: purposeful, vindictive chaos, but perhaps therein lies the saving grace of my, Donald J. Trump's, presidency," Stewart said. "No one action will be adequate. All actions will be necessary, and if we do not allow Donald Trump to exhaust our fight and somehow come through this presidency calamity-less and constitutionally partially intact, then I, Donald J. Trump, will have demonstrated the greatness of America — just not the way I thought I was gonna."

Stewart is right, of course. There is no one action that will be the magic pill that puts the Trump administration behind us. But one thing is clear: Satirical mockery, political comedy and laughtivism are some of the most powerful weapons in our anti-Trump arsenal.

Trump’s weak flank when it comes to ridicule was already well apparent before Election Day. Alec Baldwin’s extraordinary impersonations of Trump on "SNL" have led the thin-skinned narcissist to desperately tweet in response. Each time that Baldwin has mocked him, Trump has replied and looked even more foolish as a result.

Michael Moore keyed in early to the power of satire for bringing down Trump. During a pre-inauguration protest in front of Trump Tower, he called on people to remember that facts don't matter to Trump but mockery does. Moore called out to the crowd: “What’s he affected by? He’s affected by comedy! He has the thinnest skin, the thinnest skin of any bully I’ve ever met.” In all his anti-Trump rallies, Moore has urged the crowd to form an “army of comedy” to go after Trump and help bring him down.

The potential power of satire is not limited to simply getting under Trump's skin. As I wrote with co-author Remy Maisel in "Is Satire Saving Our Nation?," satire always emerges in moments of crisis and Americans have a long, robust history of using satire to productive political ends in our nation.

While satire is not likely to persuade Trump supporters to change their view of him, it is worth remembering that Tina Fey’s impersonation of Sarah Palin is credited with destroying her election run. So satire can affect public opinion and change history.

Where satire is its most powerful is in the ways it helps rally resistance and create a community of those who are in on the joke. As authoritarian regimes seek to divide and demoralize society, shared jokes breathe life and force to collective resistance. This, for instance, was what Colbert and Stewart did when in 2010 they held a pre-midterm election rally on the National Mall.

Satire, through its dependence on irony, where the satirist says one thing and means another, is a key weapon in the fight against stupidity, faulty logic and BS. When Stewart signed off as host of "The Daily Show," he reminded viewers that his comedy had tried to expose “bullshit mountain.”

In fact, much of the excellent anti-Trump satire available involves precisely using irony, sarcasm and snark to expose the lies, alt-facts and hubristic smokescreens that Trump and his minions throw at us daily. A mainstay of political satire, from John Oliver’s exposé of Trump’s true last name, Drumpf, to Samantha Bee’s recurring segment “People Are Saying,” is to champion logic and critical thinking.

Satire can form a central part of collective resistance. It was a key part of the “pussyhat” project that helped add fun irony to the activism of the Women’s March. Lizz Winstead, one of the original creators of “The Daily Show,” is a co-founder of Lady Parts Justice, which uses comedy to help fight for women’s reproductive rights.  The organization's goal is to “blow this shit up in a smart and funny way . . . . to get folks to sit up, take action and reverse this erosion of rights.”

Similarly, the satirical activism of groups like the Yes Men has helped public protests gain attention and advance political causes. These groups offer models for public stunts, campaigns and marches that blend the fun of pranks with the punch of protest.

Because satire is fun, it can play a major role in helping combat a culture of fear. The Trump team doesn’t only try to frighten its supporters; it also consistently threatens any opposition. Against that sort of bullying, satirists like Lee Camp, Bill Maher and Jimmy Dore offer viewers fearless opposition. One key feature of their political comedy is that they refuse to submit to prevailing narratives, which means that they go after Trump but don’t give liberals a pass either.

Maher has always refused to succumb to a party line and was even fired after 9/11 for saying things others dared not to. Both Camp and Dore consistently attack the capitalist oligarchy. Their comedy helps model the sort of righteous anger that true political resistance needs.

Satire also can play a major role in creating community and developing a common critical vocabulary that can be used to speak truth to power. "SNL" has been at the forefront of this sort of comedy in the Trump era, repeatedly offering viewers skits that have gone viral.

In addition to Baldwin and McCarthy making guest appearances, members of the regular cast of "SNL" (especially Kate McKinnon and Beck Bennett) have offered fun, entertaining, yet hard-hitting skits. Saturday's show is set to have Alec Baldwin as host and is sure to ruffle Trump’s feathers while helping millions across the nation and the world laugh at his expense. Despite Trump’s whining that the show sucks, its rating have popped more than 20 percent since last year and are at their highest level in 20 years.

In a similar vein, both Seth Meyers and Trevor Noah have sharpened their satirical teeth going after Trump and his kakistocracy. Working their dimply smiles and boyish charm, both comedians have used their charisma to pack a different kind of satire punch.

In another example, Comedy Central has recently launched a new online satirical show, the “Mideast Minute” hosted by Pardis Parker, which pokes fun at U.S. propaganda news. And we can’t forget the good work in the “fake news” of The Onion and accomplished by The New Yorker's Andy Borowitz.

The reality is that the satire rebellion is using a range of tactics and the examples are too numerous to list — which is exactly the kind of strategy the anti-Trump resistance needs.

Serbian satirical protestor Popovic explained that while humor has often been a part of protest, it is playing a bigger role in 21st-century struggle and that's because it works: “Humor breaks fear and builds confidence. . . . The best acts of laughtivism force their targets into lose-lose scenarios, undermining the credibility of a regime no matter how they respond. These acts move beyond mere pranks; they help corrode the very mortar that keeps most dictators in place: Fear.”

That’s why we need to follow the lesson of Serbia under Milosevic. History teaches us that for satire to really be powerful, we all have to be in on the joke.

The satire resistance cannot be limited to professionals. It depends on all of us.

At the New York protest in January, Moore reminded people that they, too, can play a role in the satire rebellion: “Everybody here has a sense of humor. Use it! Use it! Participate in the ridicule and the satire for the emperor who has no clothes.”

And that’s one of the strongest signs that satire is a key part of the anti-Trump campaign. Every day an average citizen is mocking Trump and his team. There is even a Twitter parody account for Trump’s bathrobe.

So whether you share clips from Baldwin’s appearance on "SNL" tonight or create your own meme, you are making a difference. Each joke shows Trump that he is the butt of it and lets us control the story and create a broader community.

Our laughter isn’t just making us stronger; it’s reminding us that fighting for our nation can be fun.