Opiate For the Masses: Do you like to watch? Your secrets are not safe with your TV

Thought your TV kept all your guilty pleasures a secret? If you own a Vizio, think again and take precautions 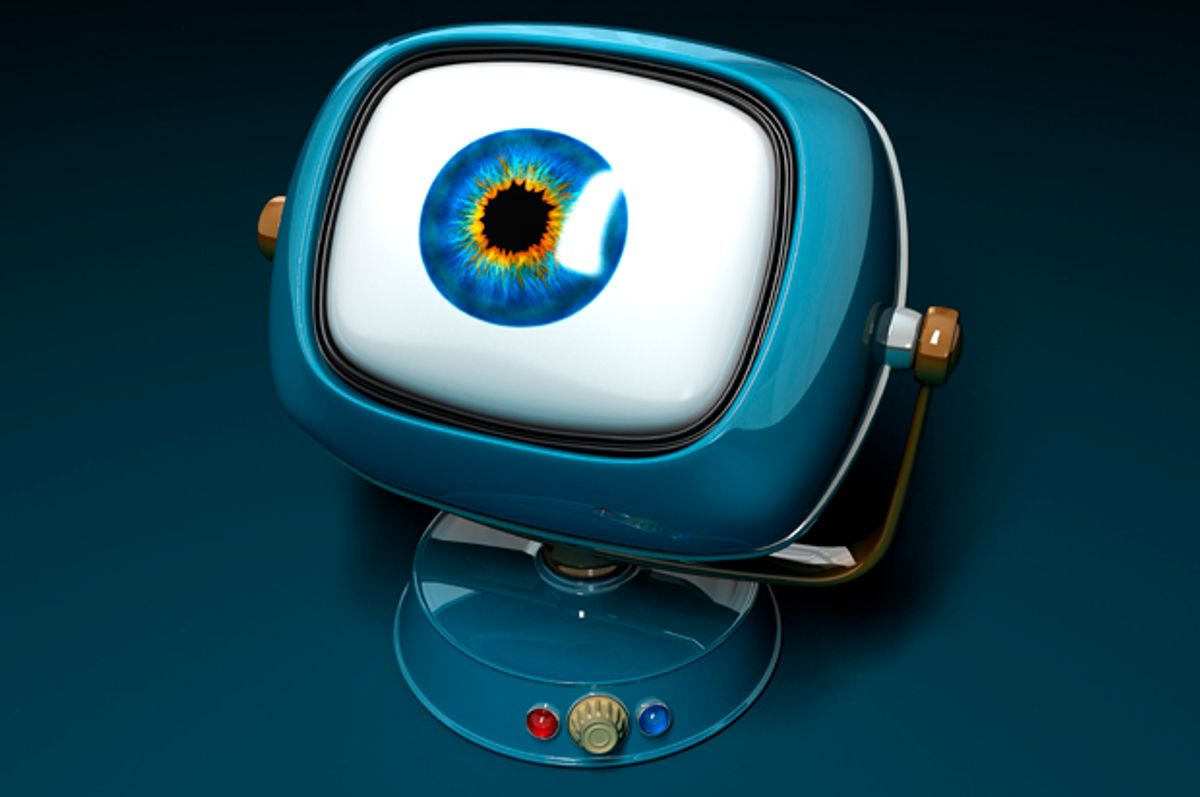 My name is Melanie, and I am a trashy TV addict. Proud to say I’ve been clean for a couple of years now. Really haven’t missed the nagging guilt and soul-sucking shame that always accompanied binging on my dreck of choice in secret. Honestly, there’s such a wealth of legitimately worthwhile television available that I have not been tempted to backslide into the junk.

But I haven't come before you to celebrate my victory over the dumpster TV demon. Rather, I am here to make amends. I appears that some of my past misdeeds may have affected all of you.

You see, during the time when I indulged in my poison of choice, a dastardly syndicated work called “Cheaters” — the hour-long version with the eloquent gentleman narrator, not the half-hour “dude-brah” fest -- I have standards, dammit! — I was under the impression that I was only hurting myself. It was my mindless garbage of choice during my frequent bouts of insomnia. My 2 a.m. toot, if you will.

Unbeknownst to me, another entity was aware of my fix, keeping track of how often I binged and passing that information along to third parties.

That entity was my goddamn traitor of a Vizio television.

According to a legal complaint filed by the Federal Trade Commission and the office of New Jersey’s attorney general, Vizio has been tracking and collecting what I and millions of other Vizio owners have been watching on a second-by-second basis since February 2014. That wouldn't have been illegal if Vizio had informed me that they intended to track and collect my data. It is interesting to note that Vizio didn’t run afoul of the law by tracking its customers’ data, which is perfectly legal. Practically every major smartphone program and social-media platform collects user data — it’s something nearly everyone has agreed to at one point or another after likely declining to read an End User License Agreement when installing an app. Instead, the TV maker got in trouble for not disclosing that it was doing so.

Did I tell them they could do that? No. I did not. The proprietary software used to accomplish this invasive data scrape was turned on by default from the moment I hit the on button, and I didn’t even know it was happening until this week.

That means for the last three years, the device that has a place of honor in my living room was, in fact, the Devil’s Window.

The FTC complaint estimates that more than 11 million Internet-connected Vizio televisions have been monitoring our addiction to “Here Comes Honey Boo-Boo” or “Duck Dynasty” or “Bad Girls Club” or “Keeping Up with the Kardashians.” Each of its TVs captured up to 100 billion data points each day and uniquely matched what we viewed to a database of publicly available television, movie and commercial content.

Now, I do not watch any of the shows mentioned above. Never have. But I cannot claim any moral superiority over others who do because, well. . . “Cheaters.” Millions of viewers continue to endorse the careers of Kim and Kourtney and Khloe and the rest of that brood, it’s true. But my viewership enabled the work of Joey Greco and Clark Gable’s grandson, a pair of professional peeping toms and ambush artists who plied their trade until very recently.

May I also admit that February 2014 was not exactly the best of times for yours truly? Life had tumbled into a depressive funk, as it does sometimes, and I barely remember most of my days, let alone what I was watching. As such, I can only imagine what other crazy data my traitorous TV was siphoning back to Vizio’s Spymaster General.

What if you bought your Vizio before 2014? Sorry to report this, but you did not escape the company’s villainous scheme. Vizio remotely installed the proprietary software on older “smart” televisions.

You may be saying to yourself, “This woman is correct to feel boundless and everlasting shame over her prior addiction to I.Q.-deteriorating detritus. But what does this have to do with me?”

Simply this: Vizio sold the raw data collected from its sets to third-party companies. Ergo, what we watched influenced ad targeting. Once a third party had our IP addresses, they could analyze all kinds of behavior. A company could pinpoint whether an individual’s viewing of an advertisement resulted in a visit to said product’s website, or if an online promotion for a series was effective in driving tune-in.

Ever experience whiplash at being subjected to a commercial for Ashley Madison, the world’s #1 online adultery facilitator, after watching an intriguing interview of a world leader on “The Daily Show”? Metadata scraped from sets like mine may be partly to blame for that. I am a regular “Daily Show” viewer who, in the past, found comfort in watching a lot of nutty dross.

Samsung and LG TV owners, don’t act so smug. If your TV has a voice command feature, it may have been capturing your conversations without your knowledge and transmitting them to who knows where.

To be fair to myself -- we’re our own worst critics, aren’t we? -- I’m not solely to blame for America’s eyeballs coming under attack by commercials that make you want to take a “Silkwood” shower. It took the data of millions to get that ball rolling. Nor am I a male between the age of 18 and 34, the core demographic of the “The Daily Show;” their habits likely had a larger influence than mine on what commercials Comedy Central viewers were served.

I wonder what those guys are doing when they’re not watching late-night TV?

Allegedly that opportunity has passed. The company has agreed to pay $2.2 million to settle the case, $1.5 million of which will go to the FTC, with the remaining $700,000 going to the state of New Jersey. Vizio must also stop collecting data unless it has express permission from users to do so, and is required to delete all the data it gathered prior to March 1, 2016.

Furthermore, a New York Times article reports that Vizio will now prominently feature an opt-in notice sharing information about the collection of its viewing data, which users much accept in order to be enrolled in its data collection program.

Just to be somewhat safer — Big Brother is everywhere, no getting around that — you might want to disable the feature manually. On Vizio televisions, open the TV’s Menu option and click on System. Go to Reset & Admin, then click on Smart Interactivity. Using the right arrow on your remote, turn the feature off. That’s it!

You are now free to watch hours and hours of this weekend’s “I Love New York” marathon on VH1 in relative peace and privacy. I won’t be indulging; I’m off that nonsense. But we all need a crutch to get us through dark times. If yours happens to involve one of Flavor Flav’s exes, I have already established that I am not one to judge.