R.J. Reynolds is seizing on the hot button issue of police harassment to stop a potential menthol ban 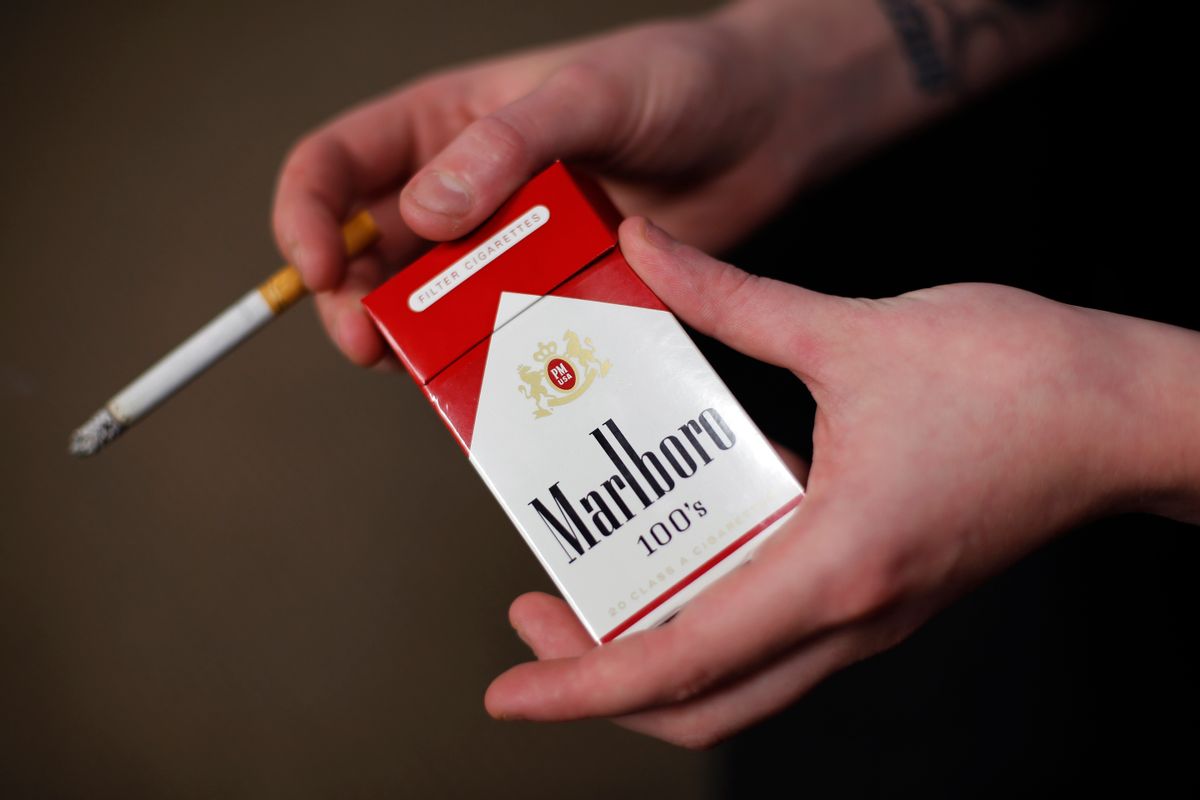 Tobacco giant R.J. Reynolds, the top seller of the menthol cigarettes favored by most black smokers, is seizing on the hot button issue of police harassment of blacks to counter efforts by public health advocates to restrict menthol sales.

In recent months, the company has quietly enlisted black groups and leaders, including civil rights activist Rev. Al Sharpton and ex-Florida Congressman Kendrick B. Meek, to hold meetings at prominent black churches on the theme of “Decriminalizing the Black Community.” Sharpton and Meek, along with speakers from groups involved in criminal justice reform, have warned of the unintended consequences of banning cigarettes with the minty, throat-numbing additive — namely, the risk of creating an underground market and giving police new reasons to lock up black males. The meetings have been held at churches in Minneapolis, Los Angeles and Oakland, and in other forums.

Reynolds makes Newport cigarettes, the most popular menthol and the No. 2 U.S. cigarette brand overall, with a market share of nearly 14 percent. The company has paid travel costs for the panelists and contributed to their organizations, according to the panelists and Reynolds spokesman David Howard. However, promotional flyers (here, here and here) suggest that Sharpton and his National Action Network are the main sponsors of the meetings, rather than the tobacco company.

Anti-smoking advocates have blasted the campaign as deceptive and a scare tactic. “How can the tobacco industry care about criminalization when they don’t even care about killing you?’’ said LaTrisha Vetaw, who attended a Jan. 25 meeting at the Greater Friendship Missionary Baptist Church in Minneapolis, where a few dozen people turned out to hear Sharpton and be treated to a lunch of chicken, mashed potatoes, green beans and cake.

"Unintended consequences" of a ban

Sharpton led protests against police abuses following the death in New York City of Eric Garner, an incident frequently invoked at the meetings. Garner died in July 2014 after police put him in a chokehold while arresting him for allegedly selling untaxed single cigarettes, or “loosies.” But in his remarks in Minneapolis, Sharpton said repeatedly that he had not made up his mind about a menthol ban, according to a tape of the meeting. “I am not on either side of the argument,” he said. ”I want to hear and listen.”

In an interview with FairWarning, Sharpton said Meek, a Reynolds consultant who serves as moderator at the meetings, ”asked us to consider the unintended consequences of a menthol ban,” and also asked him to appear at several of the churches. Sharpton said he expects the National Action Network to take a position on a menthol ban at its convention in April.

Meek, who could not be reached, is a former Florida highway patrolman later elected to Congress, serving four terms in the House of Representatives before losing to Marco Rubio in the 2010 race for U.S. Senate. Over the years, the tobacco industry contributed $202,510 to his congressional campaigns and leadership political action committee, according to data from the Center for Responsive Politics. Meek received $104,342 of that in the 2009-10 campaign cycle, more than any other member of Congress except North Carolina Republican Sen. Richard Burr.

Meek and the others have stressed that they aren’t in favor of smoking. “We have to deter smoking, okay,” Meek said at the Minneapolis meeting. “But we also have to make sure that . . . we’re not giving tools to law enforcement” to ensnare more young blacks in the criminal justice system.

There is almost no chance of a menthol ban at the federal level. But as reported by FairWarning, some local officials and anti-smoking groups have taken up the cause of regulating menthol sales. In Chicago, sales of flavored tobacco products, including menthol cigarettes, are banned within 500 feet of high schools. In Berkeley, California, a law that took effect Jan. 1 prohibits such sales within 600 feet of schools. Advocates in Minneapolis and St. Paul, where menthol cigarettes are exempted from an ordinance restricting sales of flavored tobacco products to adult-only tobacco shops, are trying to repeal the menthol exemption.

Menthols account for about 30 percent of U.S. cigarette sales, but are the choice of more than 80 percent of black smokers and more than half of smokers under age 18, according to research cited by the Centers for Disease Control and Prevention. About 47,000 African Americans die annually from smoking-related causes, according to agency estimates.

There is no evidence that menthols are more toxic than other cigarettes. But health authorities describe menthol cigarettes as a starter product, saying menthol anesthetizes the throat, helping beginners to tolerate the harshness of tobacco smoke so they are more likely to become addicted. For these reasons, said a 2013 report by the Food and Drug Administration, it is “likely that menthol cigarettes pose a public health risk above that seen with non-menthol cigarettes” — a conclusion cigarette makers hotly reject.

The landmark 2009 law that authorized the FDA to regulate tobacco products included a ban on candy, fruit and spice cigarette flavorings because of their appeal to young smokers. But Congress punted on menthol, directing FDA to do research on whether it, too, should be restricted or banned. In 2013, the FDA put out a call for comments on a possible menthol ban, but has done nothing since, and there appears to be almost no chance the Trump administration will act.

"Being ahead of the issue"

Along with Sharpton and Meek, speakers at the Reynolds-sponsored meetings have included John I. Dixon III, former president of the National Organization of Black Law Enforcement Executives, which lists Reynolds American Inc., parent of R.J. Reynolds, as one of its corporate partners. Other panelists have been Neill Franklin, a former Maryland State Police narcotics officer and executive director of the Law Enforcement Action Partnership, and Art Way, Colorado state director of the Drug Policy Alliance.

Franklin said his group, whose focus is ending the war on drugs, received $75,000 from Reynolds in 2016 but is not controlled by any of its donors. “My place in this is to give education to people about what potentially could happen if there is a ban,” he told FairWarning. “To me, it’s being ahead of the issue.”

Way said opposing a menthol ban is a ”natural fit” with his group’s “general concerns over [the] black market and the kind of unintended consequences of banning popular substances . . . We say what we want to say,” and reach larger audiences, ”basically on Reynolds’ dime.”

The forums haven’t been limited to black churches. Last June, at the annual convention of the National Newspaper Publishers Association — the trade group for more than 200 African-American community newspapers — Meek, Dixon, Franklin and Way were listed on the program for a “Panel Discussion, Criminal Justice Reform — Hosted by RAI Services Company,” a reference to Reynolds. In 2015, Reynolds contributed $250,000 to the publishers association, according to a document posted on the company’s website.

“Yes, RAI has provided some funding to those organizations,” the Reynolds spokesman, Howard, said in an email to FairWarning. “We work with these organizations in an effort to engage in conversations to work to resolve controversial issues related to tobacco use in a responsible manner, while ensuring that any new rules or laws do not result in troubling unintended consequences.”

But Vetaw said the company is blowing smoke. The tobacco industry “is great at marketing . . . so they send celebrity Al Sharpton,” said Vetaw, who is policy and advocacy manager for the North Point Health and Wellness Center in Minneapolis. “A couple of people in the room said, ‘Well, Al Sharpton’s here so this must be important. ‘ ”

Valerie Yerger, who attended an October meeting at the Beebe Memorial Cathedral in Oakland, had her microphone cut off when she tried to raise the issue of Reynolds’ involvement in the event, according to interviews and a report by Oakland North, a newspaper published by the UC Berkeley Graduate School of Journalism. Yerger, an associate professor of nursing at UC San Francisco who has researched the history of tobacco industry support for African-American groups, said the campaign shows that cigarette makers are continuing to use "influential black leaders and their organizations as a front group to promote industry interests."