Brief Encounters: The pleasures of being lost in translation 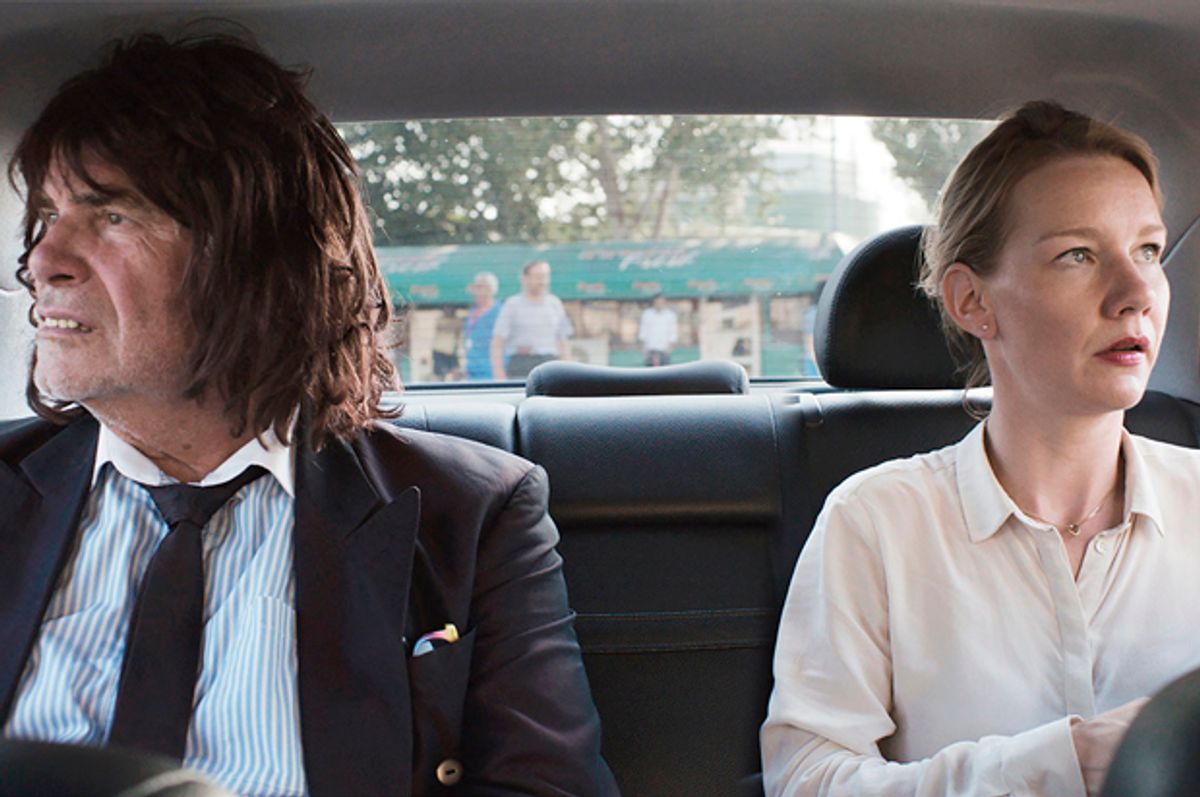 It’s a powerhouse scene in a nearly flawless film, to be sure. It captures the unlikely alchemy of irony, earnestness and let’s call it quotidian surrealism (that is, commonplace, even boring scenarios made weirdly exciting) that have endeared “Toni Erdmann” to critics and audiences. But they don’t quite cut to the heart of the film like another extended comic sequence, in which the highly congenial Winfried, who is posing as a business consultant named Toni Erdmann in order to get closer to his daughter while she oversees the final stages of an oil company outsourcing gig in Bucharest, finds himself just off the beaten path while pretending to inspect a construction site. Tucking into the scraggly woods to relieve himself, Winfried is approached by a Romanian man, who offers the use of the washroom in his nearby ramshackle cottage.

The scene is simultaneously banal and bizarre. Unable to understand his guide, Winfried nonetheless follows along, uses the toilet (the seat of which is emblazoned with an airbrushed tiger, for some reason) and stumbles back up the path, accepting a bushel of apples from his new friend. It’s a bit that condenses many of the movie’s themes, while setting up a revealing piece of dialogue. When Ines grills her father on where he was, and why he was talking to this strange man living in he woods, Winfried offers, sincerely, “It was a nice encounter.”

“Toni Erdmann” is a comedy about these encounters: the fleeting, ephemeral moments that spring from the messy ether of life, and dissolve before we even recognize them as memorable. In his guise as the titular “business coach,” Winfried spends the film stalking (and borderline-tormenting) his high-strung daughter. He wears gruesome fake teeth, regales strangers in Bucharest nightclubs with bizarre stories about dying sea turtles, arrives at a party dressed in lavish costume. In his incessant pranksterism, he is creating moments and manufacturing pleasant (or at least memorable) encounters.

Watching Ade’s film constitutes its own kind of “nice encounter.” For an English-speaking audience, the film exists at a remove, a glimpse at a German sense of humor that is itself at a remove, unfolding among sometimes amused, sometimes confused Romanian locals. Things are muddled in translation, but nothing is lost. “Toni Erdmann” is often so funny not in spite of our ability to grasp their cultural context (or indeed, our ability to just basically understand them), but precisely because of that lack of context, that misunderstandability.

The original U.K. “Office,” the funniest TV show ever made, offers great examples of how a joke being lost in translation — or even being shifted into a different cultural and national context — only makes it funnier. In one of the most hilarious scenes in the show’s second season, hapless boss David Brent (Ricky Gervais) attempts to spin his termination for chronic impotence as an opportunity, believing that it’s his duty to wander the burghs and hamlets of southeast England, inspiring other flailing managerial drones and hopeless cubicle zeroes. He then rails off a list of such places: “There’s Reading, Aldershot, Bracknell. I’ve got Didcot, Yakel. Winnersh. Taplow, y’know? Because I am my own boss. Burghfield.”

At the risk of spoiling the joke by explaining it, it plays to audiences unfamiliar with the fineries of greater Berkshire county geography precisely because of how plain the places sound. Imagining Taplow is even funnier than knowing about it. The same is true for the show’s jokes about pitchmen from English bank commercials or washed-up “Big Brother” contestants. A similar thing occurs in the new series “Nirvanna the Band the Show,” the first scripted TV show produced by VICE Media’s Viceland network. Set and shot in Toronto, the film abounds with super-specific references to local media (alt-weekly NOW Magazine), concert halls (the once-glorious Rivoli, which is now more of a Cobb salad restaurant) and businesses (Honest Ed’s, The Green Beanery). Yes, these are real places and people. But they are simultaneously vague and familiar enough to feel like tropes.

It’s not just that calling a weekly local politics and culture paper “NOW” is equally funny (in a super-on-the-nose kind of way) whether or not one is aware of its actual existence. It’s that not knowing this makes it seem even funnier. Because, to paraphrase Kramer on “Seinfeld,” frankly it sounds made up. (Full disclosure: I worked at “NOW” for a spell, and still write for them, and can confirm that any sense that the publication’s name was totally ridiculous was not lost on anyone who worked there. It’s hard to gain perspective on something when you’re smack in the middle of it, I suppose.) There’s a certain pleasure to be found abandoning oneself to this, in getting lost in a dense matrix of hyper-local references and in quite simply in “not getting it.”

This breakdown in understanding intensifies many of the pleasures of foreign comedies. Think of Cristi Puiu’s acclaimed 2005 Romanian import, “The Death of Mr. Lazarescu,” a film about a man who believes himself to be dying and ends up shuffled from ambulance to ambulance, shuffled from hospital to hospital, with doctors unable to find anything wrong with him. To Romanians, the film could be productively viewed as a story about the country’s understaffed universal healthcare system. But to anyone without this particularized knowledge, “Lazerascu” becomes something even greater: a winding journey through an absurdist hellscape, and a pitch-black comedy that proves deeply funny (much in the way that Kafka can be considered deeply funny). Drifting just outside its national context, Puiu’s film acquires whole new resonances. (Much the same is true of Puiu’s most recent film, the tragicomic family drama “Sieranevada,” though it is neither as funny nor as absurdly hellish.) Think also of France’s famous affinity for Jerry Lewis, in which they clearly appreciated something lost on (most) American audiences. A shift in context and the content itself seems to change.

Though it is a great many things, Ade’s “Toni Erdmann” is in part a film about such shifts in context. Throughout the film, characters are forced out of their proverbial comfort zones, across national borders, and poured into whole new identities. Much of it is seemingly — to use an obnoxious buzzword, in the full knowledge of how obnoxious it is — “random.”

Why would a father put on fake teeth and risk sabotaging his daughter’s career? Why would that daughter host a brunch business meeting in the nude, or goad a lover into ejaculating onto a piece of expensive chocolate? What’s the deal with the hirsute Bulgarian hair monster costume? Why the obsession with cheese graters? Why is it so funny when a group of business yuppies refer to doing blow outside a parked automobile as a “car party”?

“Toni Erdmann” asks us to bracket these questions, or at least sort of waft past them, pushing the viewer outside of their own comfort zone, sending them down blind alleyways of cross-cultural confusion, practically demanding that they prepare themselves to “not get it.” In exchange, Ade offers the sheer, abundant pleasure of simply being adrift in mistranslation.