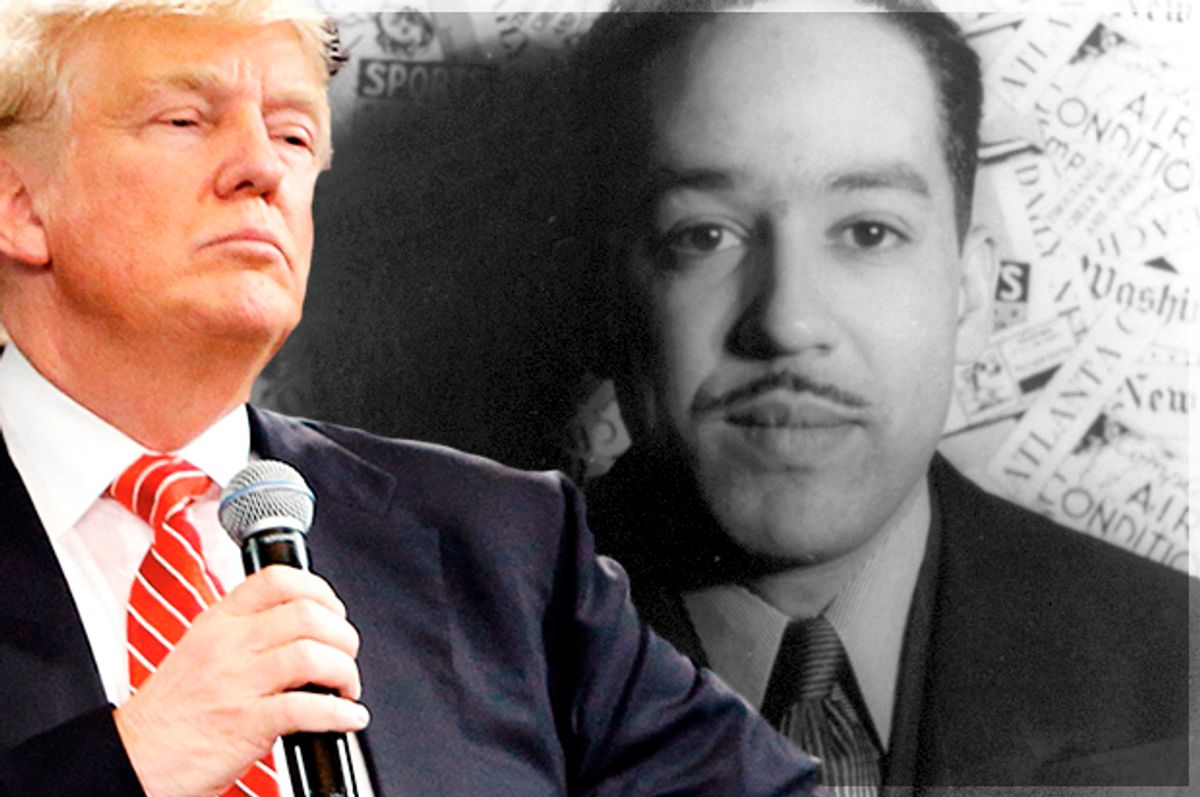 As if Donald Trump’s signature slogan “Make America Great Again” weren’t vague and confusing enough already — when exactly was it great? for whom and why? — his recent doubling down on equating America with Vladimir Putin’s Russia only makes his position more incoherent.

When Fox News' Bill O’Reilly pressed him by saying, “Putin's a killer,” Trump shrugged in response. “There are a lot of killers. We got a lot of killers,” Trump said. “What do you think — our country's so innocent?"

O’Reilly responded,  “I don't know of any government leaders that are killers.” But Trump just brushed him off, reverting to one of his favorite campaign falsehoods. “Well, take a look at what we've done, too. We made a lot of mistakes. I've been against the war in Iraq from the beginning.” In fact, the largest demonstrations in history expressed opposition to the Iraq War before it began and Trump was not to be seen among them, even in soft-spoken sideline sympathy.

“We made a lot of mistakes, OK?” Trump repeated. “But a lot of people were killed. So, a lot of killers around, believe me.”  It was typical Trump BS layer cake, but it quickly drew sharp rebukes from many quarters.

“One could argue that's the most anti-American statement ever made by the president of the United States, to confuse American values with Putin," said retired Army General Barry McCaffrey. Condemnations came from all sides and were ably summed up in a tweet from Washington Post columnist Anne Applebaum.

This whole kerfuffle may look a bit more complicated to those farther from centers of power and more mindful of America’s long history of bloody overseas interventions (especially in our own hemisphere, since the beginning of the Cold War or even just under Barack Obama) — and of the wide range of internal repression here at home, from the arrival of the first African slaves to the present day.

Along with that history of aggressive interventions, there’s a long history of American war resistance as well, from the lonely tax resistance of Henry David Thoreau in opposition to the Mexican-American War to Martin Luther King Jr.'s sermons against the Vietnam War: “I can hear God saying to America, ‘You're too arrogant! And if you don't change your ways, I will rise up and break the backbone of your power, and I'll place it in the hands of a nation that doesn't even know my name,’” King said.

Through its echoes around the world — from India’s independence movement and South Africa’s anti-apartheid movement to Tiananmen Square and the Arab Spring — this other side of American history speaks powerfully for a different vision, of our country and its global role.

This gives us an opportunity to turn to the words of Langston Hughes, whose deep grasp of America’s flaws and virtues stands in such stark contrast to Donald Trump’s ignorance and incoherence, and provides an excellent statement of how many who stand against Trump see themselves and America today. In his poem “Let America Be America Again,” first published in Esquire magazine in 1936 and with a title that today seems like a strange pre-echo of Trump's campaign slogan, Hughes sums it all up in half a tweet’s worth:

America never was America to me,
And yet I swear this oath —
America will be!

To really appreciate those words, you have to read the poem in its entirety. Hughes begins with a Hallmark card invocation of history, in the voice of a would-be Trump voter, perhaps, in a less turbulent, less strident time:

Then a parenthetical outside/inside voice intrudes:

(America never was America to me.)

From that beginning, Hughes masterfully constructs a platform on which the parenthetical voice takes center stage, speaking for all the forgotten ones from all over the world who have come to America to make its promise real:

I am the man who never got ahead,
The poorest worker bartered through the years.

Yet I’m the one who dreamt our basic dream
In the Old World while still a serf of kings . . .

In contrast to the explicit or barely veiled racism expressed by Trump and his movement, Hughes’ “I” is explicitly multiracial. The oppression of each is reflected in the oppression of others:

I am the poor white, fooled and pushed apart,
I am the Negro bearing slavery’s scars.
I am the red man driven from the land,
I am the immigrant clutching the hope I seek —
And finding only the same old stupid plan
Of dog eat dog, of mighty crush the weak.

The same is even more true today, with an even broader mix of races, nationalities and religions, as well as sexual orientations and gender identities. As the rapidly developing anti-Trump movement increasingly sees itself as unified by its diversity — not in spite of it — the multiracial “I” of Hughes' poem speaks as its herald, a coalition of multiple marginalized identities all claiming a universal inheritance.

In Psalm 118, it is written,“The stone the builders rejected has become the cornerstone,” and that’s precisely what Hughes is telling us: America’s promise means nothing, and belongs to none of us, unless it belongs to the least among us, the most discounted, oppressed and despised. We are not doing anyone a favor or being selfless when we align ourselves with the powerless, the forgotten, the strangers among us. We are taking the only sure path to our own salvation.

If anyone is excluded from universal promises and protections, then we all are. It’s just a matter of time for each of us before our individual luck runs out. There is no one whose life is so foreign, so strange and alien to us that it does not reflect on our own humanity. In fact, the more strange and alien it at first appears, the deeper the connection ultimately goes.

That is why America remains a beacon to the world — even though it is still so far from what it promises to become, even though it is now locked in what Martin Luther King Jr. described as “the long and bitter, but beautiful, struggle for a new world.” Even though America now seems locked in a death match with its Jungian shadow, its evil-twin other, its president who longs to be dictator and wants nothing more than to be liked by Vladimir Putin.

Americans of all descriptions increasingly are standing up to fight for that hope and promise. Donald Trump’s notion of America is weak and puny in comparison. His notion, in a word, is a loser.

Want to make America great again? Make it reflect the vision of Langston Hughes. Make it a product of our daily collective struggle. Make it great for the least among us, for the most despised. Make it great for whomever Donald Trump would attack the most viciously, would torture, spit on, mock and ridicule. Only then will it be America for all of us. Only then will it be America at all.