Our man in the Middle East: The confusing worldview of Trump aide Derek Harvey

Col. Derek Harvey has more mainstream views on Islam than Gen. Michael Flynn — but he still has strange baggage 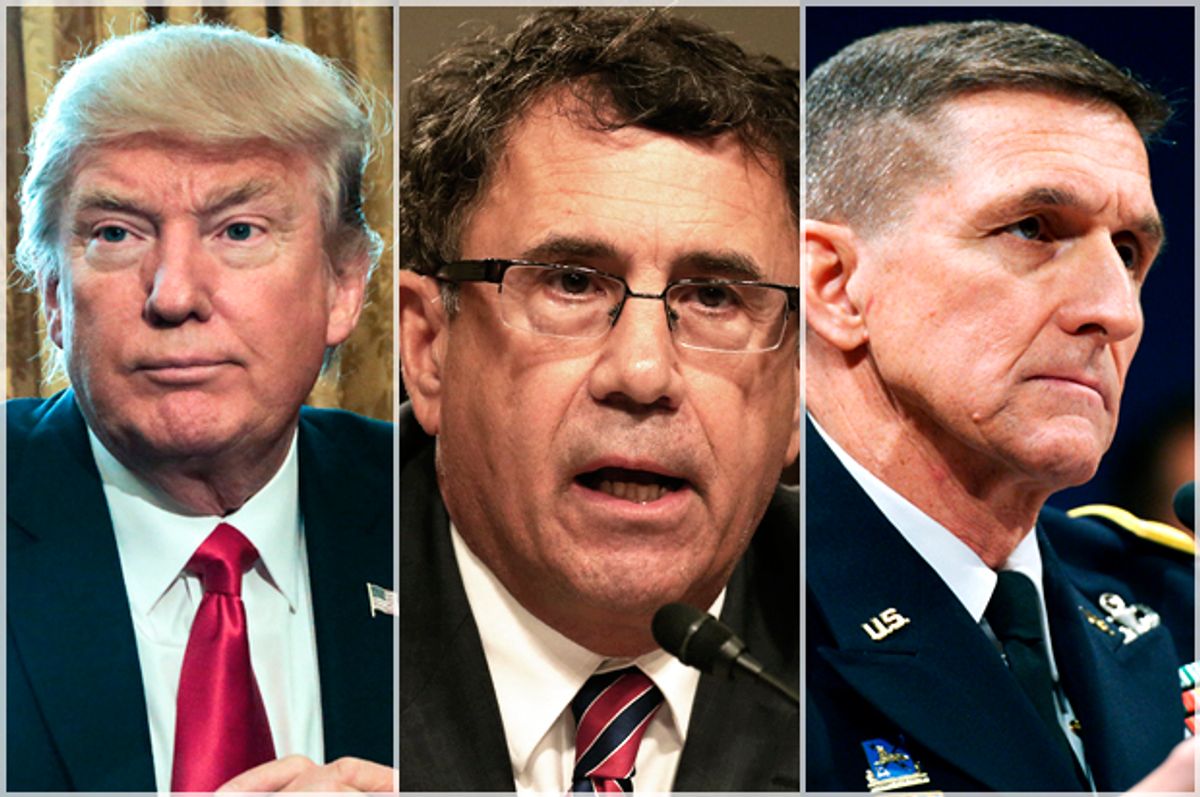 Even since Saddam Hussein invaded Kuwait on Aug. 2, 1990, the Middle East has been the central focus of American security and foreign policy. The United States maintains military bases or access to facilities throughout the region. Its largest diplomatic post in the world is located in Iraq. American diplomats have spent countless hours encouraging democracy in Egypt and many more trying to forge peace between Israelis and Palestinians. The U.S. government has supported civil society in Tunisia and trained rebels in Syria. And the American defense industry sells billions of dollars worth of weapons to the region annually.

Although the mix of issues and priorities are likely to change under President Donald Trump, Arabs, Israelis, Iranians, Kurds and Turks are likely to continue to preoccupy Washington. Trump's new CIA director, Mike Pompeo, did not visit London, Paris, Beijing or Tokyo on his first trip abroad. Rather, he went to Ankara, the Turkish capital, on Thursday.

Middle Eastern leaders seem pleased with Trump, though it remains entirely unclear what his policies toward the region might be. Thus far, the administration has sent mixed messages about arming the Syrian Kurds in the fight against the self-declared Islamic State. It has also barred the U.S. entry of citizens of  Syria, Libya, Iraq, Sudan, Yemen and Somalia (all members of the Arab League) as well as those of Iran.

In addition, the Trump administration has softened the American position on Israeli settlements; launched a raid on an al-Qaida of the Arabian Peninsula redoubt in Yemen that did not go well and has put Iran “on notice,” though no one knows what that means. Taken together, these early forays into the Middle East constitute the fulfillment of a bunch of disparate campaign promises, rather than a well-thought-out approach to the region’s myriad problems and challenges.

Last week Gen. Michael Flynn, the president’s national security adviser, told David Ignatius of The Washington Post that Trump would let the State, Defense, and Treasury Departments, the CIA and other foreign policy and national security agencies do their work, with the National Security Council playing a coordinating role. That's the way it is supposed to work, but recent presidents have tended to concentrate decision-making in the White House and within the NSC staff. Trump, who clearly prefers a small group of trusted loyalists to advise him, is likely to be no different.

Flynn, who is among those advisers, has been outspoken in his mistrust of Iran, his criticism of the Obama administration’s handling of Iraq, and, notoriously, his declaration that “fear of Muslims is RATIONAL.” As much as the Middle East will continue to dominate American foreign policy, Flynn, as national security adviser, is responsible for keeping an eye on the entire world. He will no doubt shape what Washington does in the region, but his attention will be divided. As a result, the job of running Middle East policy for the Trump administration has been handed to a retired U.S. Army colonel named Derek Harvey.

Little known outside Iraq- and Afghanistan-related military and intelligence circles, Harvey previously was an adviser to Gen. David Petraeus. Rather than serving in combat, Harvey was a foreign area and intelligence officer who excelled under difficult conditions during the American occupation of Iraq. He was an early proponent of the 2006 to 2007 "surge" that temporarily reversed that nation's descent into all-out violence and fragmentation.

Based on his various contributions to the policy debate on Iraq in publications like The Wall Street Journal, The Weekly Standard and CNN.com, it is clear that Harvey understands Iraqi political and social dynamics. He is certainly right of center on the issue and blames President Barack Obama for Iraq’s parlous condition. From Harvey’s perspective, had the former president taken an interest in Iraq, the hard-won gains Iraqis and Americans made during and after the surge might have brought stability and reduced the dysfunction that marks Iraqi politics.

In this Harvey is well within the mainstream of intellectual debates about the U.S. decision to go to war in March 2003 and the withdrawal of combat forces from Iraq in December 2011. When it comes to Iran, Harvey has articulated a tough line, but there is a fair amount of bipartisan support for this in Washington. When he turns his attention to other issues, however, Harvey offers a curious set of dubious assertions and contradictory claims, wrapped up in a troubling lack of knowledge about the region for which he is now primarily responsible. Needless to say, this combination is bad for U.S.-Middle East policy.

Harvey shares Trump's belief that in order for the United States to prevail in its fight against the self-declared Islamic State, al-Qaida, their various offshoots and a variety of other groups, American officials need to declare that the country is at war with “radical Islamic extremism” or the “radical jihadist agenda” or “militant Islam” — all of which he uses interchangeably. On his blog, which has been shut down since he joined the Trump administration, Harvey argued that Obama’s failure to do so hampered the effort against such groups.

The colonel’s underlying logic here is fairly straightforward. By identifying “radical Islamic extremism” as the problem, the United States advances its cause in two related ways: First, it separates the minority of violent radicals from the vast majority of Muslims who want nothing to do with violence. Second, it clarifies the breadth and depth of the ideological challenge that confronts the United States. These formulations are deeply appealing but only because they purposely make simple what is actually complicated. As such, they do not reflect reality.

Harvey underestimates how deeply offensive and politically troubling phrases “radical Islamic extremism” and “militant Islam” are to Muslims, who fear that they reduce the essence of their religion to violence. Rather than being a practical step to combat those who use Islam to justify their violence — something that is not unknown in the history of Christianity, Judaism and other faiths — insisting that officials invoke radical Islamic extremism is divisive and reeks of right-wing Islamophobia.

Beyond this significant problem, Harvey never tells his readers why the phrasing helps win the fight. What is wrong with calling America’s enemies what the enemies call themselves? Wouldn’t it be more accurate to say that the United States is in a fight specifically against the Islamic State, al-Qaida, Boko Haram and others? To use these proper names does not deny their ideology, which is without a doubt in cosmic conflict with the values, principles and norms of the West.

To his credit, although Harvey claims that specifying radical Islamic extremism is necessary, he never argues that it is sufficient. His solution to the problem that ISIS, al-Qaida and others represent is both American firepower and a war of ideas. These are both legitimate positions. Making it difficult for these groups to wreak havoc around the world requires military force. But in order to defeat Abu Bakr al-Baghdadi’s worldview, there needs to be an appealing alternative. Harvey assumes that because the United States defeated fascism and communism, it can play that type of role again.

That seems unlikely. The ideological battle with the purveyors of the darkest interpretations of Islam is one that is best fought by Muslims. Washington’s fruitless efforts after the 9/11 attacks to tell the American story and promote “moderate Islam” should serve as a cautionary tale. Of course, policymakers in Washington can learn from the mistakes of the past, but retooling Washington’s messaging or its digital strategy will not win the fight against extremism, especially when the administration that Harvey works for has barred Muslims from seven countries from entering the United States. The struggle with extremist groups is a theological and political battle that Americans hardly understand.

Then there is the question of who America’s allies are, or might be, in the fight against extremism. Harvey cannot seem to decide who is an ally and who is not. This confusion seems to happen when he abandons the professional dispassion of an analyst in favor of ideological zeal. In a January 2015 blog post, the colonel berated the Obama administration — with plenty of exclamation marks — for undermining Washington’s ties with three important allies: Saudi Arabia, Egypt and Israel. By the end of the year, however, he assailed the Saudis in The Weekly Standard as purveyors of the radical Islamic extremism with which Harvey says the United States is at war.

Analysts should change their minds as new information comes to light, but the accusations that Harvey levels against the Saudis are distinctly old news. Presumably, he knew about the kingdom's long history of links to radical Islamist theology and ideology when he took Obama to task for jeopardizing ties with the House of Saud 11 months earlier. So why the change? That's not entirely clear, but it seems that the two missives in question have more to do with where Harvey places himself on the political spectrum than an objective evaluation of the data before him.

In another article, Harvey bemoaned the fact that a regional power like Turkey lost confidence in the United States during the Obama years. He identified the Ankara government as an ally against extremists, including the Muslim Brotherhood. This is extraordinarily odd, given the fact that the Turks initially turned a blind eye to jihadis who used their territory to wage war against Syrian President Bashar al-Assad and subsequently coordinated with extremist groups in Syria.

Harvey also seems to have missed the fact that the Turkish government opened its doors to many members of the Muslim Brotherhood after the July 2013 coup d’état in Egypt that forced the Brotherhood’s Mohamed Morsi from the presidential palace, providing the ousted members with a platform with which to discredit Egypt’s new leader, Abdel Fattah al-Sisi. Yet Harvey seems to like Sisi, lauding the Egyptian leader for his public stance opposing extremism — something the American right gives Sisi too much credit for and the American left too little.

Regardless, Egypt is not the regional force for stability it once was, even if, like Harvey, one sees the world almost entirely in terms of the fight against Islamist extremism.

In order to make good foreign policy, officials need good assumptions about the world. Derek Harvey’s core concerns about the fight against extremism; the containment of Iran, which is a revolutionary power; and the level of American investment required to stabilize Iraq are widely shared among scholars and analysts. Yet his underlying ideas about how to achieve these goals are either confused, uninformed or burdened with unhelpful ideology. The only development this portends is continuing frustration for the United States, which seems forever stuck in the Middle East regardless of who occupies the White House.