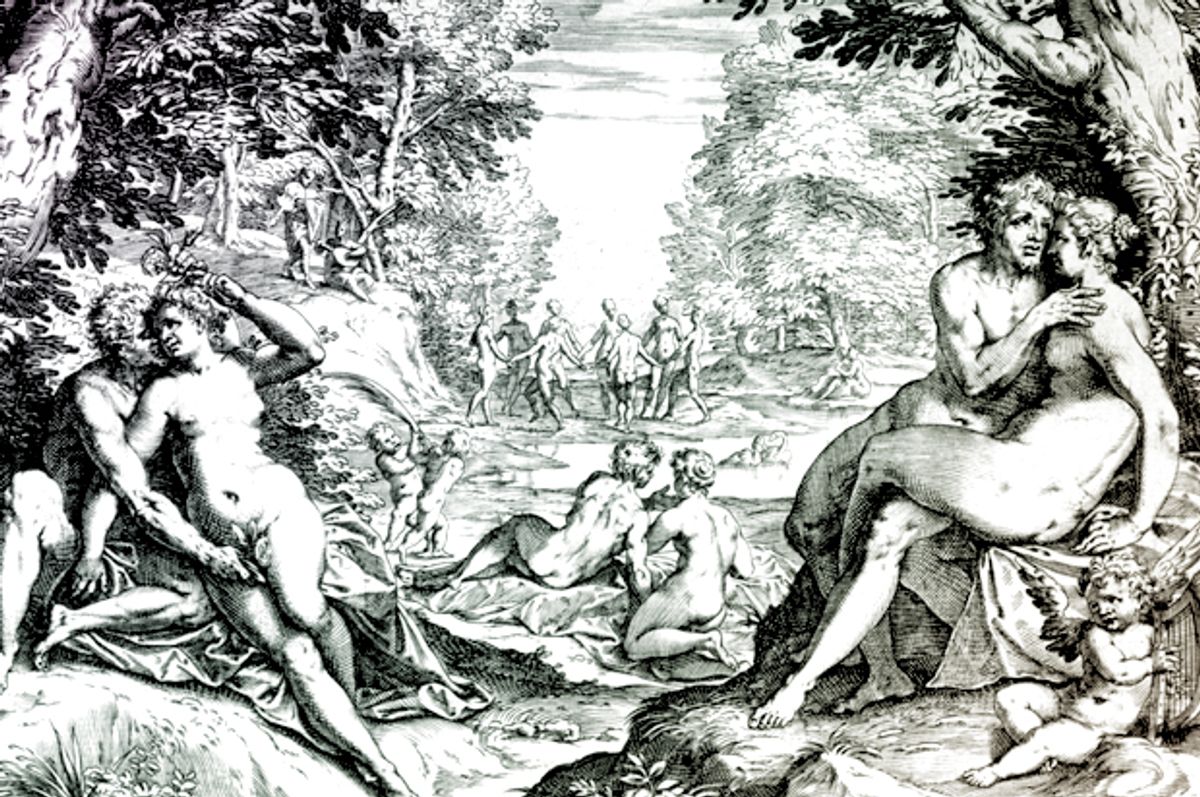 The dictionary definition is not particularly helpful: “printed or visual material containing the explicit description or display of sexual organs or activity, intended to stimulate sexual excitement.” There must be explicit display with intent to stimulate sexual excitement. Nudity, even explicit, without intent to stimulate, passes the "is it art?" test. That means that Courbet’s 1866 "Origin of the World," is art, not porn (though it was certainly accused of obscenity by its contemporaries). A close-up of a lady’s hoo-ha was too realistic for Victorian society, even though it is decidedly un-sexy. It was intended to stimulate, of course  — discussion, not sexual excitement.

Nudity has always been acceptable in the art world, but this was largely with the unwritten requirement that the nudes be statue-like, idealized, scrubbed clean of overly realistic and close-to-home details, like pubic hair. These nudes were often intended to be stimulating, however. Excusing the art because it depicted Venus, rather than a real woman, gentlemen patrons sometimes kept these reclining nude paintings behind curtains, for their private enjoyment or to show off to male friends. Though such paintings seem lovely and tame from a sexual standpoint today, they must be considered in context. We live in a hyper-saturated society with sexual images available in abundance, everywhere, of the most graphic nature that one could hope to google (while careful to erase one’s “history” after). Back in the 16th century, a fellow might never have seen a naked lady before his wedding night, so sneaking a peak at Lucas Cranach’s rendition of "Reclining Venus" was pretty hot stuff. It was art, but it was also sex...

The origin story of sexually stimulating art is the Hellenistic sculpture called "Aphrodite at Her Bath" (or sometimes "Crouching Venus"). The nude goddess of love crouches beside a bathtub, about to get in, but is suddenly startled by a (presumably male) presence. She quickly tries to cover her breasts and glances over her shoulder. We, the male viewers of the art, are stand-ins for this startling presence, and the attempt at hiding her nudity only heightens it — we feel the tingle of excitement of seeing something we feel we weren’t supposed to see. An ancient viewer was said to have been so aroused by this statue that he felt compelled to release a “money shot” upon it. Who said that art history lectures were boring?

The subject of an exhibit currently on at the Whitworth Art Gallery in Manchester, England, Raimondi was among the most famous and skillful printmakers of the 16th century. He was a major artist in his own right, but he was best known for having been Raphael’s official printmaker. He was licensed to create engravings based on Raphael’s paintings. Engraving is a very difficult technique, in which a metal burin is forced into a wooden or metal plate. The depressions produced are then filled with ink and moist paper is pressed onto the plate, using a mechanical printing press. The moist paper squishes into the grooves, soaking up the ink. This allows for infinite reproductions to be made, each one sold at reasonable cost and easy to disseminate. It was through these prints, which traveled to collections throughout Europe, that Raphael achieved international renown, even among people who had never been to Italy to see his paintings in person.

But Raimondi had a naughty streak. He was the subject of what may have been the first intellectual property lawsuit in history, a case brought in Venice in 1506 by Albrecht Dürer. Dürer, Europe’s most famous printmaker, spotted nearly exact copies of some of his works being sold from the Dal Jesus print shop in Venice. The artist was Raimondi, who even included Dürer’s trademark, a large letter “A” with a smaller letter “D” between the legs of the “A,” which was seen as a guarantee that the work was Dürer’s. But wily Raimondi had also included three differences in his prints that made them not exact copies of Dürer’s, and through this loophole he got off easy — Dürer won the case, but it was not a resounding victory.

It was Raimondi who created the images for the first work of printed pornography, a book called "I Modi" (“The Positions” or “The Ways”), also known as "The Sixteen Pleasures" (or, if you’re into Latin, "De omnibus Veneris Schematibus"). As per the title, the book was built around engravings of 16 sexual positions, based on a lost series of paintings by Giulio Romano, Raphael’s pupil, which he had painted for Federico II Gonzaga, to decorate and provide inspiration at his Palazzo Te in Mantua (destroyed in 1630, during the War of Mantuan Succession). Raimondi first published the engravings in 1524. Pope Clement VII was unimpressed, and threw him into prison, ordering all copies of the engravings burned. Like Justice Potter Stewart, Pope Clement VII knew porn when he saw it, and he had seen it. But here’s the catch. Giulio Romano was not punished for his original paintings, because they were never intended for public viewing — only the private enjoyment of Duke Federico Gonzaga. Raimondi was quick to “borrow” the art of others, not only Dürer — it turned out that Romano had no idea about the engravings, and was only informed when visited by one of the great personalities of the Renaissance, and a man with a wonderfully naughty streak himself, Pietro Aretino.

Aretino was perhaps the first person who was most famous just for being famous, more so than for any of his actual creations: his letters, plays or sonnets. The best friend of Titian, Aretino owned a palazzo in Venice where he hosted raucous parties. He was known as a great wit, referred to as the “scourge of princes” for his scathing repartee — something of a pre-modern Oscar Wilde. To get a sense of him, you need only learn how he died: The story goes that he had a stroke induced by laughing too hard at a dirty joke made at the expense of his sister. This was a man with whom you wanted to do ice luge shots.

Aretino liked the cut of Raimondi’s jib, and decided to compose 16 sexually explicit sonnets to accompany Raimondi’s engravings. He negotiated Raimondi’s release from prison, and a second edition, now with Aretino’s text, was published in 1527. This was the first time that erotic text and images were combined in print, and the first time that pornographic images (which happened to be very beautiful and by a great artist) were mass-produced for the general public. Pope Clement was still unimpressed, and tried to destroy all copies of this edition, too (as far as scholars can tell, only a few fragments survive). A pirated, rather crudely copied edition was printed in Venice circa 1550 (with apt irony, given that Raimondi had engaged in copying someone else’s work in Venice, 44 years prior), showing that black-market porn was a thing, even in the 16th century. Something slipped through the papal dragnet (perhaps because, in that same year, the pope had other problems, like the Sack of Rome by the renegade army of Charles V). A 17th-century painter, Agostino Carracci, arranged for a reprinting of Aretino’s poems, and also seems to have copied the original engravings, some of which must have survived. A 17th-century Fellow at All Souls College, Oxford also oversaw a printing of an English edition at Oxford University Press, entitled "Aretino’s Postures" (the dean at the time confiscated the copper plates used for the engravings — recall that Oxford began as a largely theological institution).

"I Modi" is no historical footnote or oddity of artful pervy-ness. It influenced the history of art. Agostino Carracci’s interest in it (whether artistic or more corporeal, or both) resulted in an adaptation of its poses to deck out the Farnese Gallery, the second-most-important fresco in art history (right after the Sistine Chapel). The great room at Palazzo Farnese in Rome was painted by the Carracci family and their students, who were the leading academic painters of the 17th century (they ran an academy in Bologna that trained the top painters of the post-Caravaggio era). The ceiling of that room (which not so well-known outside of art history circles, since Palazzo Farnese is the French Embassy in Rome, and the room can only be seen on guided tours) is decked in paintings with a theme of gods gettin’ jiggy with mortals, making plastic the popular ancient Latin poetry of Ovid’s "Metamorphosis."