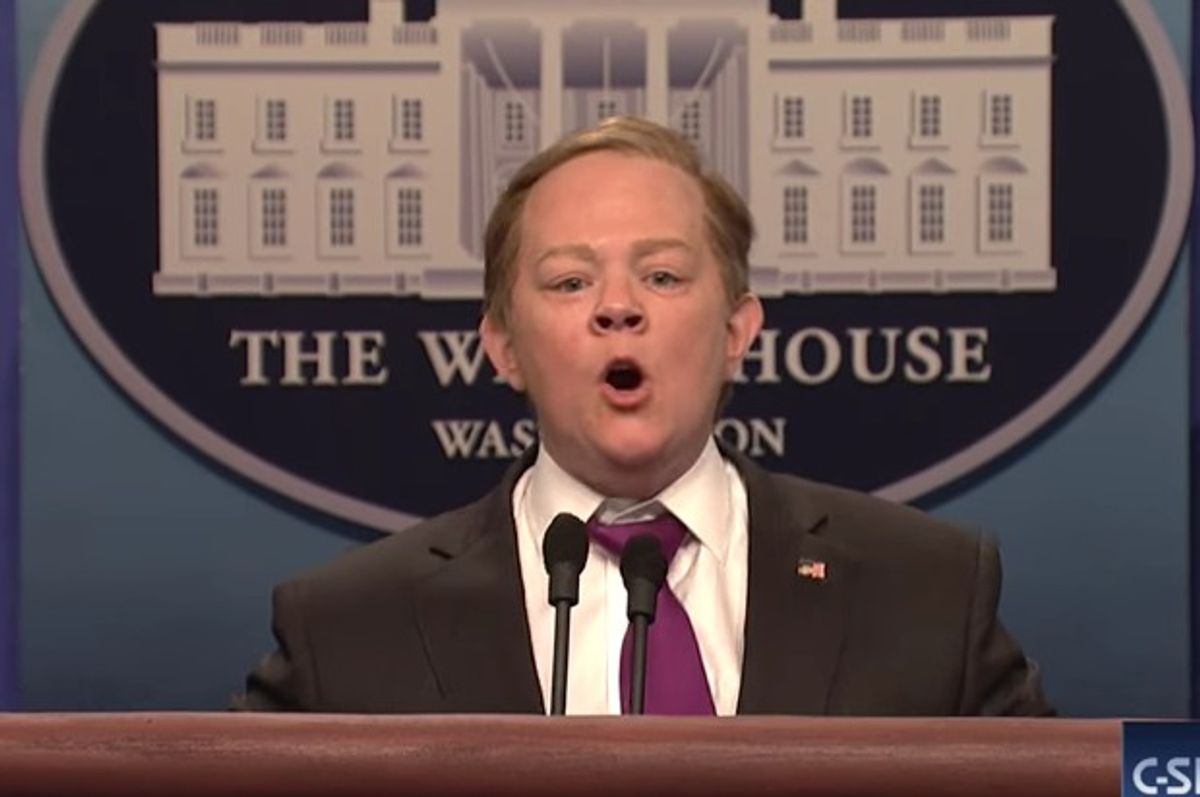 Melissa McCarthy did so well in her first impersonation of White House Press Secretary Sean Spicer last weekend on SNL, they brought her back again to play the cantankerous, fact-challenged flack. "First I'd like to announce that I'm calm now. and I will remain calm as long as you sons of bi*. . . I'm not gonna do that," McCarthy as Spicer said, taking a deep breath.

"I'd like to begin with the president's schedule.," Spicer said, shoving a giant, foot-long piece of gum into his mouth, then spitting it out in hunks. Unable to pronounce multi - syllabic middle eastern names, especially the name of a dignitary's wife, he grumbled, "Oh, Jesus. Let's just call her Connie." Moving on, Spicer added, "I'm gonna open it up to questions now, and I'm gonna freak if you start asking stupid ones."

Doing deep breathing, Spicer went on to call the press "dumb babies" for asking the expected "stupid questions. He then pulled boxes of doll props he had last week during the skit, with a flourish. The boxes, which were emblazoned with the  President of the United States seal, contained dolls to illustrate how immigration policy would work in the President Donald Trump era. First, he showed a Barbie doll, and yelled that because she was approaching immigration upon return from her "dream vacation" and was blonde, "we know she's OK!"

His next example was a Moana doll, from the Disney animated film of the same name (Moana is Hawaiian, thus actually American, a fact overlooked by McCarthy as Spicer).  "Uh, oh, it's Moana," he yelled, holding the brown-skinned doll up to the TSA agent doll. "Slow your roll, honey! We're gonna pat her down, read her emails and if we don't like what they say, it's Guantanamo Bay!" Spicer screamed, throwing the dolls vigorously back in the box.

Unraveling though he promised not to, Spicer went on to shill Ivanka Trump's accessories and shoes, revealing that he was wearing some and calling department store Nordstrom's decision last week to pull her line "a terrorist act" the press wasn't covering.  Spicer introduced Secretary of State Jeff Sessions, played by Kate McKinnon, who spoke briefly but upon uttering a racist remark, was shoved off the podium by Spicer.