What’s next for Standing Rock? Sioux tribe is calling on people to flood Capitol Hill in March 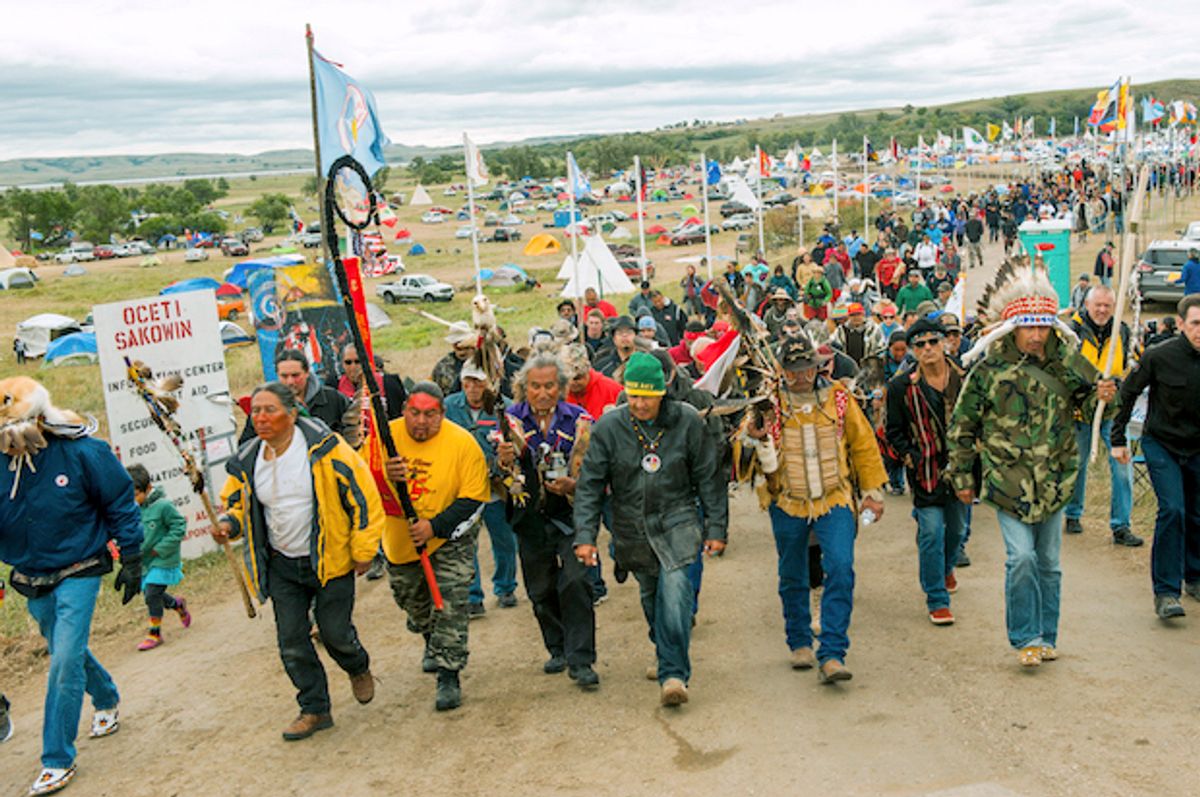 This story is part of Sarah Jaffe’s new series, Interviews for Resistance, in which she speaks with organizers, troublemakers and thinkers who are doing the hard work of fighting back against America’s corporate and political powers.

In this edited and condensed post, Jaffe speaks with Judith LeBlanc of the Caddo Nation of Oklahoma, who is director of the Native Organizers Alliance. (The full interview is also available online.) After she spoke to LeBlanc, the U.S. Army approved the construction of the Dakota Access Pipeline on Tuesday, Feb. 7, and we followed up with her.

What is your reaction to the news that the Dakota Access Pipeline has been approved for construction?

The decision by the Army Corps of Engineers to give the easement to the Dakota Access Pipeline is no surprise. We knew as soon as President Donald Trump entered office that he signed an executive memorandum on expediting the process and actually sidestepping the process that had been agreed to.

It means that now we have to stand even more with the Standing Rock Sioux tribe; to stand behind them by supporting the legal fight they are launching to prevent the subjugations of the earlier decision under the Obama administration to actually consult with the tribe and to study the environmental impact; and also to continue to put maximum pressure on the Corps to reverse their decision. We, along with a number of other groups, have collected nearly a half million statements of comments, which we intend to deliver to the Army Corps of Engineers today [Feb. 8] at 5 p.m. in Washington, DC. All the way along, the Corps has cherry-picked regulations when it comes to infrastructure projects.

The fact remains that the Standing Rock Sioux tribe has a legal right and a moral responsibility to protect the land, water and air, not only for their tribe but for the 17 million people who live along the Missouri River and therefore protect Mother Earth. Now we have to step up the pressure and in the next days there will be actions, there will be repercussions that the Trump administration and the Corps will face. It has fired up the grass roots.

What is going on at Standing Rock?

[Last week, on Feb. 2] there was a march in downtown Seattle, where hundreds of people came out to support the Seattle city government resolution to divest from Wells Fargo. [Editor’s note: On Feb. 7, the Seattle City Council voted to cut ties with Wells Fargo over its role as a lender to the Dakota Access Pipeline project, as well as other business practices.]

Standing Rock is everywhere. It is a beautiful thing because water gives us life and water has become, because of what has happened at Standing Rock, a symbol for all that is sacred and important for humanity and for Mother Earth. We have an organized approach to moving the battle for Standing Rock to the other reservations of the Oceti Sakowin and to spreading the organizing all across the country, because tens of thousands of people have gone through the Oceti Sakowin camp and have become a part of this magic moment in Indian country. The Oceti Sakowin elders who came together for the first time since the Battle of the Little Bighorn extinguished the fire that had been burning to guide the prayers of the camp, to guide the way the camp existed. They now are planning to visit each of the territories of the Oceti Sakowin to fortify the resistance to potential takeovers of our land and the infringement on our sovereignty.

In the last few days, some of those in the camp who want to remain in the area built another camp outside the Oceti Sakowin camp a little ways down the road. There were many people arrested as a result.

We have run up against a very difficult situation with the Trump administration being elected to office.

We have run up against a very difficult situation with the Trump administration being elected to office. One of the senators from North Dakota [John Hoeven (R-ND)], very pro-pipeline, has become the head of the Chair of the Indian Affairs Committee in the Senate. We are up against a situation where it is very hard to see how the pipeline will be stopped, unless we continue to put the pressure where it needs to be, on the 17 banks that have invested; continue to pressure the Trump administration to not violate the law; and proceed with the environmental impact study that was mandated under the Obama administration.

What has it been like this winter? There have been people camped out all the way through, right?

People began to prepare in October for the winter, because North Dakota winters, you don’t play with them. They are very, very severe. Collectively, people began to prepare for winter starting in October and early November — fortifying the different places where people were sleeping, yurts, insulating the teepees, redistributing the kitchen so it could be in different sectors of the camp. But as we moved into December, when the big blizzard hit, it became clear that people’s lives were in danger. There was a call for people to protect themselves by taking the struggle home, to go home and to continue to support the legal fight.

The Standing Rock Sioux tribe is calling on people — all people, Indians and non-Indians — to come to Washington, D.C., March 6-10.

Trump and his people have already made noises about trying to sell off more native people’s lands. How can people respond to that if they are just going to try to privatize everything?

The Standing Rock Sioux tribe is calling on people — Indians and non-Indians — to come to Washington, D.C., March 6-10, where we will establish a prayer camp on the National Mall and will spend our days doing actions, flooding Capitol Hill, and then marching on the White House on March 10. We are working to bring together the other 300 tribes that stood with Standing Rock. Over 300 tribes, many of them who derive significant revenue streams from fossil fuels, stood with Standing Rock because it is a matter of tribal sovereignty. We have the right to decide for our land, our water and air, and how our people are affected by these greedy corporations who will stop at nothing to maximize their profits.

All over the country fossil fuel corporations have come onto our land, paid us money, taken their profits and run.

When you look at the Navajo Reservation and at the reservations in Nevada and all over the country, fossil fuel corporations have come onto our land, paid us money, taken their profits and run, leaving generations of disease and death in their wake. We are inviting all of these tribes to march on the White House to say, “President Trump, you meet with us, you deal with us as sovereign nations.” The Indian people who come from all over the country, as we did flock to Standing Rock Reservation, we will flock to Capitol Hill and lay it on the line with the members of Congress.

We are going to make a statement, just as the people did at the airports on protecting the rights of immigrants and as we did during the Women’s March. President Trump, we are on our way.

Let’s talk a little bit more about the role of these divestment campaigns targeting the banks and the financial institutions that are funding the pipeline.

This is a very important strategy to get at the systemic nature of the role that fossil fuels play in the economy and in creating the huge threat to the existence of our planet. If you want to go to the roots, the economic and structural roots of a problem, you have to dig into the role of financialization and the banks. This divestment movement has given a handle for many who wouldn’t come to Oceti Sakowin camp, who need to do work in their own communities to make the links between the problems we face and the role that banks and the economic system plays in the broader crisis.

I think the divestment strategy and the pressure that it is putting on Energy Transfer Partners is very important in shifting those around the Trump administration to think about the bottom line. At this point, the pipeline is losing money. It is not a good business investment. Energy Transfer Partners acted for the last two years in the business pages in North Dakota and the Wall Street Journal that “Hey, we have got this. We have the permit. This is going through.” They kept building the pipeline until it got to the point where it was so close to the reservation’s water supply that the resistance began. I don’t think they anticipated the resistance would last as long as it has, and I think it has begun to dawn on some of the investors, especially the banks outside of the country, that even if the pipeline was moved away from the current path, the resistance would continue. It wasn’t the Standing Rock Sioux tribe saying, “Not in my backyard.” They were saying, “Not in anyone’s backyard.” Pipelines break.

Interviews for Resistance is a project of Sarah Jaffe, with assistance from Laura Feuillebois and support from the Nation Institute. It is also available as a podcast.