Why disasters repeat themselves: We ignore the lessons of the past at our own expense 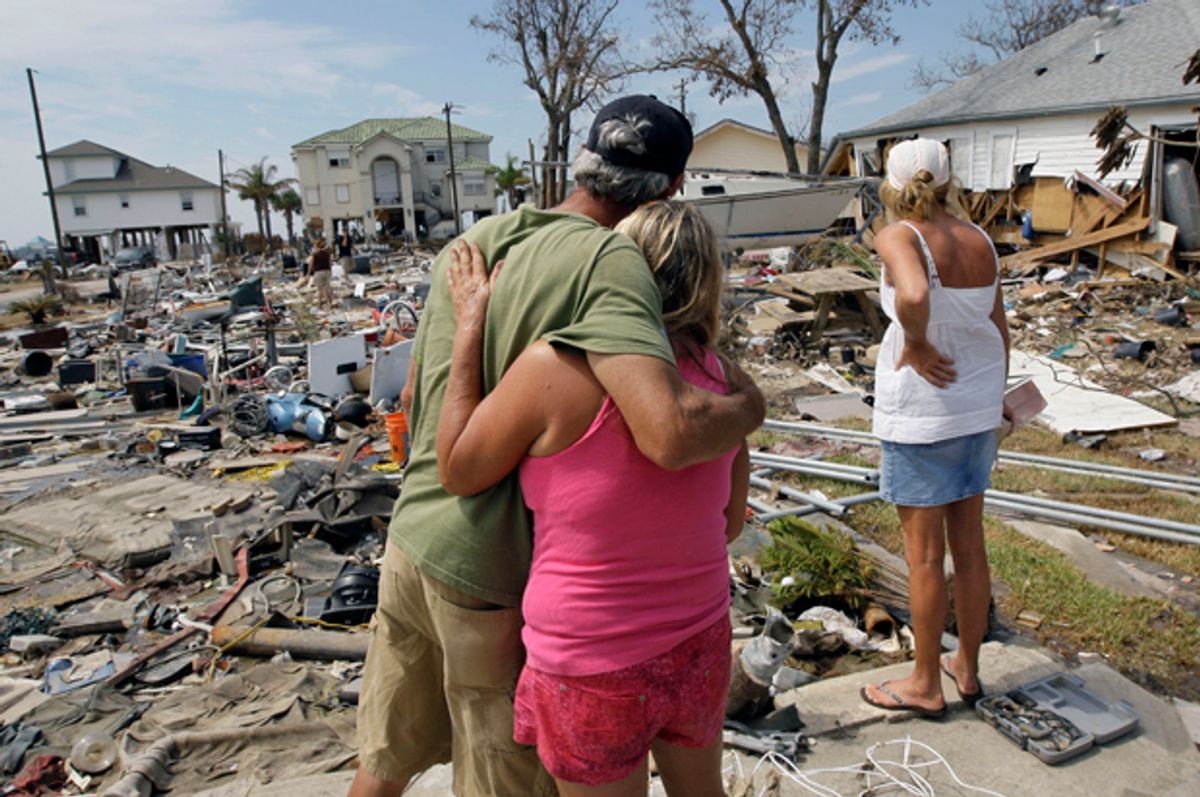 Residents look over debris left in the the aftermath of Hurricane Ike in Galveston, Texas, Sept. 24, 2008. (AP/David J. Phillip)
--

It is often observed that history is inevitably prone to repeat itself, and perhaps nowhere is this truer than in disasters. People resettle in floodplains, stock market crashes come in cycles, and careless drivers suffer repeated crashes. Each time such an event occurs, one hears pledges to take steps to ensure that the adverse event never occurs again, but inevitably it does — something routinely attributed to short memories.

A case in point is the story of the Galveston Seawall. When dawn broke on the morning of September 8, 1900, the people of Galveston had no inkling of the disaster that was about to befall them. The thickening clouds and rising surf hinted that a storm was on the way, but few were worried. The local weather bureau office, for its part, gave no reason to think otherwise; no urgent warnings were issued, no calls were made to evacuate. But by late afternoon it became clear that this was no ordinary storm. Hurricane-force winds of more than 100 miles per hour were soon raking the city, driving a massive storm surge that devoured almost everything in its path. Many tried to flee, but it was too late. By the next day, more than 8,000 people were dead, the greatest loss of life from a natural disaster in U.S. history.

After the 1900 catastrophe, the surviving residents of Galveston eschewed the natural instinct to abandon the city and rebuild elsewhere. Instead, they used their own money to construct a massive seawall around the city that was 17 feet high and 16 feet wide at its base — high enough to ward off the tides of all but the most extreme hurricanes. Even more remarkable, residents also funded raising the elevation of the entire city from 2 to 18 feet above sea level.

The protective investments worked. Over the next century the Texas coast was repeatedly hit by hurricanes, some stronger than the 1900 storm, but none imposed more than minor damage on Galveston. And lest residents somehow attribute the lack of losses to a belief that the city was inherently immune to storms, on the 100th anniversary of the storm a monument was installed on top of the wall to remind residents and visitors why the wall was there.

Yet the seawall came with one aesthetic cost, one that, for many, increasingly trumped the advantages of safety it afforded: the loss of the city’s natural beach. As the neighboring metropolis of Houston grew, and as wealthier residents looked for places to build vacation homes, the unsightly seawall (and by extension, the protection it afforded) was something to be avoided rather than sought. The unprotected coasts just north and south of the city were thus rapidly developed. Of course, it would be just a matter of time before another major hurricane struck the area, and in 2008 one did: Hurricane Ike. While there indeed was damage in the city proper, it was nothing compared to the complete destruction that occurred on the Bolivar Peninsula, just to the north, which had been highly developed.

In the weeks that followed, it seemed as though the only sensible remedy for the Bolivar Peninsula was to abandon it. To this end, the federal government offered a buy-back program to more than 1,000 residents who had lost their homes in the storm, with the intention that there be no rebuilding there. Still, memories prove short. Rather than walking away, by 2010 the empty lots that were once seen as testaments to the inherent risk posed by the location were now seen as cheap buying opportunities, and a new building boom ensued. The disaster cycle was poised to begin anew.

Why we have trouble learning from the past

In the wake of almost all major disasters there will be news articles highlighting how the impending catastrophe could have been foreseen from prior experience. When Hurricane Katrina flooded the city of New Orleans in 2005, much of the blame was directed at policy makers who had been remiss in maintaining the city’s vital levees, which implies a collective amnesia as to why the levees had been constructed in the first place. When Hurricane Sandy wrought devastation along the Northeast coast in 2012, some tried to excuse the lack of preparedness by claiming that the storm was an unforeseen quirk of climate change, overlooking historical experience: The Northeast coast is prone to a major hurricane hit every fifty years or so. And of course, those who invested in the World Trade Center in July 2001 seemed oblivious to the risks the buildings posed, despite their having been the target of a terrorist attack less than a decade before 9/11.

These seeming acts of forgetting are the result of two forces that, acting in tandem, make investments in protective action difficult to sustain. The first force is emotional: While we might well have good objective memories for past catastrophes, memories of the emotions that accompanied them tend to fade quickly — and this emotional reaction is critical to motivating action. The second force is positive reinforcement: Costly protective actions, when undertaken, are rarely positively reinforced. A homeowner who lets her flood insurance policy lapse in order to afford a new television set is much more likely to feel good about this purchase than to regret not having maintained her insurance coverage should she suffer damage from a flood next year. In essence, when it comes to safety, the reward structures become flipped from what they are in most aspects of life: The actions that are the most beneficial to us in the long run get punished, while those that are the least beneficial get rewarded.

But investments in protective action must be pursued. We know the next disaster is coming.

Adapted from "The Ostrich Paradox: Why We Underprepare for Disasters," by Robert Meyer and Howard Kunreuther, © 2017. Reprinted by permission of Wharton Digital Press.