Adele has hiccup, again, during live performance at Grammys

When you blow the [sic] lead, start again: Adele knows something about cursing on stage at Grammys, and do-overs 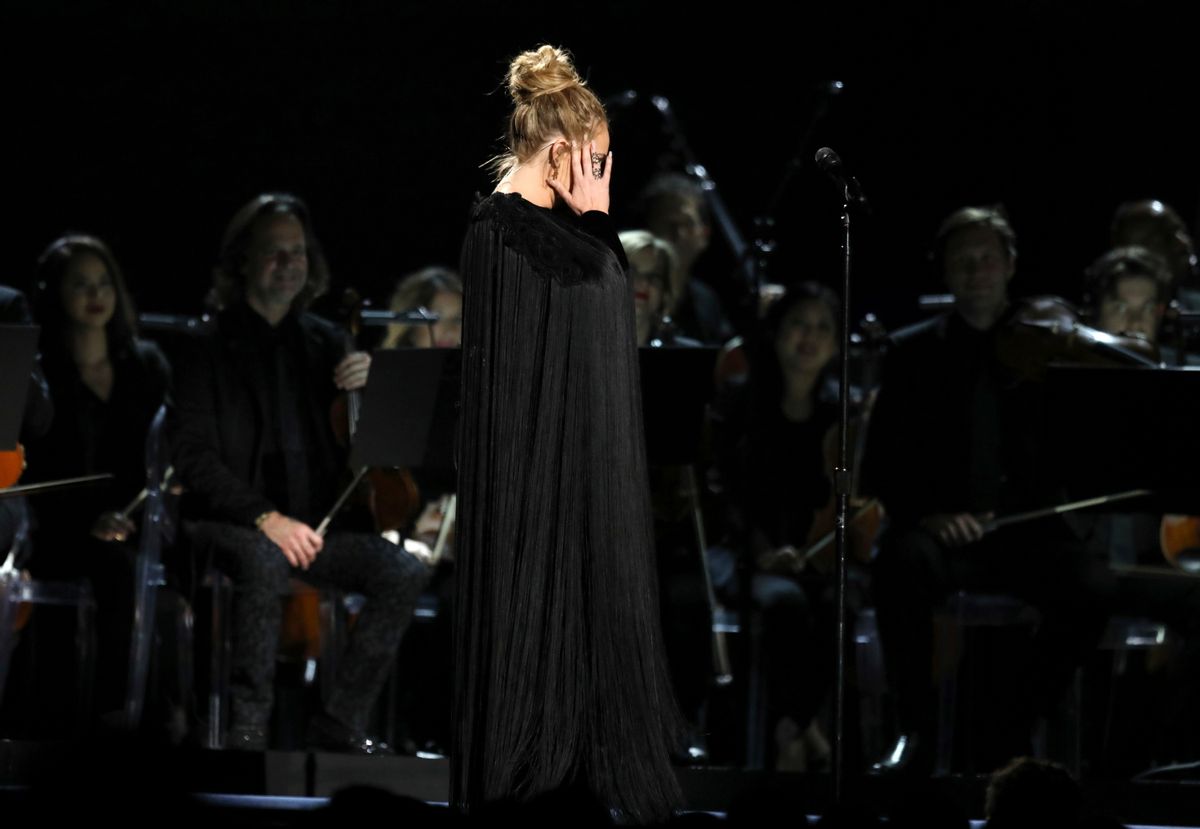 LOS ANGELES — Adele, who had trouble with her live performance at last year's Grammys, restarted her tribute to George Michael Sunday at the Grammy Awards, telling the audience: "I can't mess this up for him."

She stopped and used an expletive after singing some of a new arrangement of Michael's "Fastlove," as videos and photos of Michael played in the background. She re-sang the song and earned applause and support from the crowd at the Staples Center in Los Angeles, though Adele was teary eyed.

At last year's show, the British singer had a hiccup after a microphone inside a piano fell onto the instrument's strings.

She was still a big winner with best pop vocal album and pop solo performance, and she and could win even more awards later in the show.

A tribute for Prince by Bruno Mars and The Time will happen later in the show.

Until Adele's restart, Beyonce was the talk of the show. In glittery gown, gilded crown and gold choker, a pregnant Beyonce took the Grammy stage Sunday in a lengthy performance of two songs from her critically acclaimed album "Lemonade." She was introduced by her mother and former stylist, Tina Knowles: "Ladies and gentlemen, with my mother's pride, my daughter, Beyonce."

Beyonce sang on top of a long table, even leaning back on a chair while singing "Love Drought." She later sang "Sandcastles" while sitting down, hitting high notes.

David Bowie, who died last year from cancer, won all four awards he was nominated for. He won three in the pre-telecast, and took home best rock song for "Blackstar" during the live show.

"Blackstar," his final album released days after he died, also won best alternative music album, rock performance, and engineered album, non-classical (Bowie is listed as one of the engineers on "Blackstar.") In the latter category, he beat out Prince, who also died last year.

Adele kicked off the Grammys with a live rendition of her comeback anthem, "Hello," which helped her win two early Grammys: "Hello" won best pop solo performance and "25" won pop vocal album in the pre-telecast ceremony. In the top three categories, she will go head-to-head with Beyonce.

Mars and his groovy band gave a memorable performance of "That's What I Like" — as Jennifer Lopez, Faith Hill, Rihanna and even some of the men in the audience watched closely, looking impressed.

"Glory be to God. I claimed this victory in the name of the Lord. I want to thank God for my mother and my father who supported me since I was young," Chance the Rapper said onstage after winning best rap performance.

James Corden, hosting the Grammys for the first time, rapped some of his monologue at the top of the show, namedropping Prince, Rihanna and Drake.

Twenty one pilots won best pop duo/group performance for the hit "Stressed Out." They removed their pants when accepting the award in homage to their earlier days when they watched the Grammys at home in their boxers.

Justin Timberlake's "Can't Stop the Feeling!" — which is nominated for an Oscar — won best song written for visual media. His No.1 hit is from the "Trolls" soundtrack. Lady Antebellum's Hillary Scott won two Grammys in the Christian category for the album she recorded with her family. Scott, who has won seven Grammys with Lady A, cried onstage both times when accepting the wins.

"We've been crying since this project started," her father, Lang Scott, said.

Best new artist nominees The Chainsmokers won best dance recording for the pop hit "Don't Let Me Down," while album of the year nominee Sturgill Simpson won best country album for "A Sailor's Guide to Earth."

The country music rebel thanked his wife, who he said told him to quit his job on the railroad years ago and move to Nashville.

"My wife's dream was to make a hymns album. She didn't have the chance to do it until she'd been diagnosed with stage 4 cancer, so she'd sing in hotel rooms while she did chemotherapy and radiation," said Rory, who added that his wife said if they were nominated he had to attend the Grammys. "She got a big smile on her face and she said, 'Remember, if we win, I'll know before you will."

Some actors won Grammys, too: Don Cheadle picked up best compilation soundtrack for visual media for "Miles Ahead," where he is credited as a compilation producer, and Carol Burnett won the best spoken word album Grammy.

Beyonce was the overall top nominee with nine. There are few things the pop diva has not conquered, and the Grammy for album of the year is one of them.

For the third time, Beyonce is nominated for the coveted trophy, an award given to few R&B-based performers and only two hip-hop acts in the Grammy's 59-year history.

She was nominated for the top prize in 2010 with "I Am ... Sasha Fierce" (losing to Taylor Swift) and in 2015 with "Beyonce" (Beck was the surprise winner). Her "Lemonade" album is competing Sunday, along with its hit "Formation" for record and song of the year.

Beyonce has lost record of the year four times, and she's marking her third nomination for song of the year (she won in 2010 with "Single Ladies").

Beyonce's main competition is Adele, who won album, song and record of the year in 2012 with "21" and "Rolling In the Deep." While some critics argued that Beyonce's "Lemonade" was more artistic and had a stronger impact on culture, Adele's "25" marked her comeback and became a multiplatinum juggernaut, setting a record when it sold over 3 million units in its first week.

Their competition for album of the year aside from Simpson includes Drake's multihit "Views" and Justin Bieber's redemption album "Purpose."

Nominees battling "Formation" and "Hello" for record of the year include Rihanna and Drake's "Work," twenty one pilots' "Stressed Out" and Lukas Graham's "7 Years."

Song of the year nominees are "Formation," ''Hello," ''7 Years," Mike Posner's "I Took a Pill in Ibiza" and Bieber's "Love Yourself," shared with co-writer Ed Sheeran.

Collaborative performances include Lady Gaga and Metallica, Alicia Keys and Maren Morris, and A Tribe Called Quest and Anderson .Paak. Chance the Rapper will perform with Kirk Franklin, who won two awards, including best gospel album and gospel performance/song for writing "God Provides" for Tamela Mann.

Rihanna, Drake and Kanye West are the second-most nominated acts with eight each.