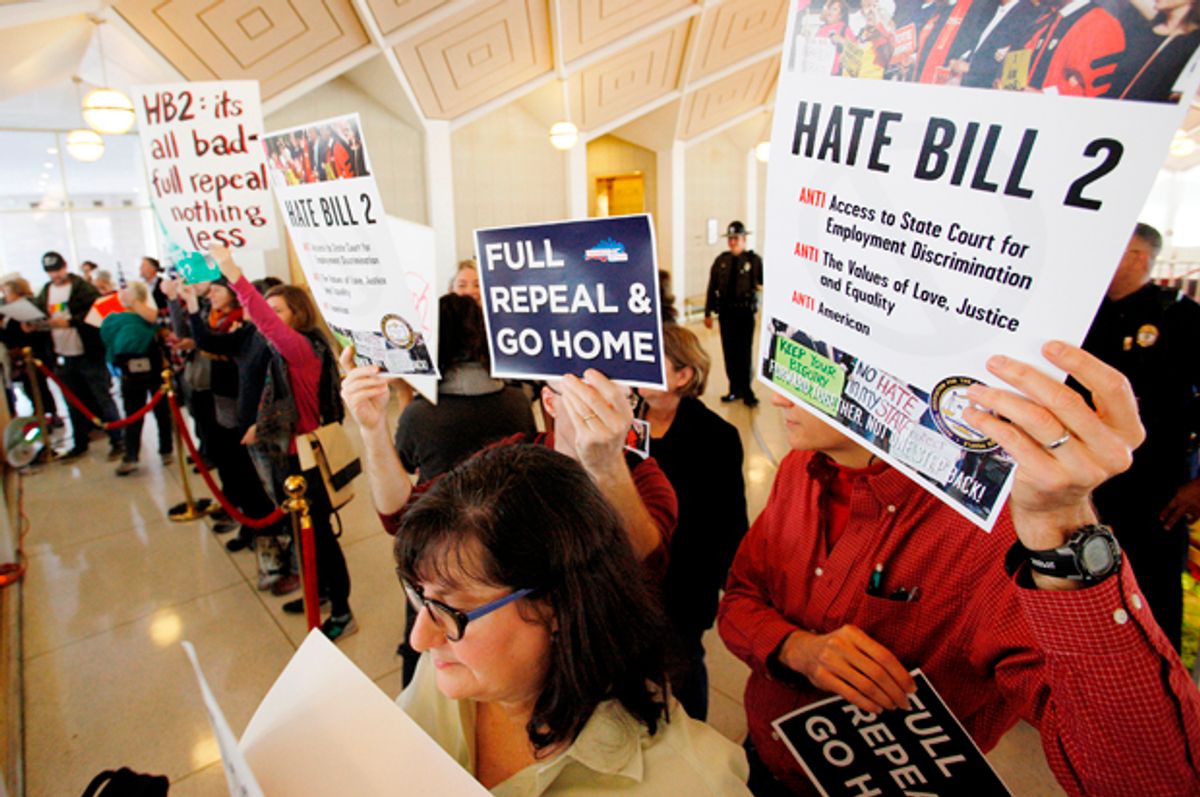 The Trump administration took the first step in its anticipated rollback of LGBT rights over the weekend.

Just days after the POTUS opted not to sign an executive order that would have given businesses, federal agencies and private individuals the ability to deny services to LGBT people, the Department of Justice signaled it would no longer enforce the Obama White House’s guidance on trans students. The Department of Justice filed a brief on Friday rescinding a request made during the Obama years for a stay in a court case set to be heard this week. This reversal could undo the important steps taken by the previous administration to protect transgender youth. Without that guidance, this population would be extremely vulnerable to harassment, bullying and discrimination.

Last year, the Obama administration issued a “Dear Colleague” letter to schools across the U.S. which advised that trans students should be allowed facility access that matches the gender with which they identify. Following the release of the 25-page document outlining best practices for schools, 12 states sued the federal government to block the guidance. They worried that noncompliance with the regulation, which doesn’t carry the force of law, could result in a loss of federal funding.

The states suing the DOJ, which included Alabama, Arizona, Wisconsin, Tennessee and Maine, scored a crucial victory last August, when U.S. District Judge Reed O’Connor sided with the parties requesting a temporary injunction. O’Connor, a George W. Bush appointee, claimed that Title IX of the Education Amendments of 1972, which argues that schools may not discriminate on the basis of sex, very narrowly defines that term as “the biological and anatomical differences between male and female students as determined at their birth.” On this point, he claimed the law is “not ambiguous.”

Although the Obama administration hoped that the stay on its trans student guidelines would be contained to the states who lobbied for an injunction, that request was rejected. Oral arguments were set to be heard on February 14 to overturn that ruling, but the brief filed Friday stated that the DOJ would no longer appeal. “The parties are currently considering how best to proceed,” the document stated.
LGBT advocacy groups lambasted the DOJ decision, one made just two days after Jeff Sessions, the Alabama Senator whose confirmation was protested by Elizabeth Warren, was sworn in as Attorney General. “Transgender students are entitled to the full protection of the United States Constitution and our federal nondiscrimination laws,” said Chad Griffin, CEO of the Human Rights Campaign. “It is heartbreaking and wrong that the agency tasked with enforcing civil rights laws would instead work to subvert them for political interests.”
“The chief lawyer of the United States is now someone who has devoted his whole life to obstructing civil rights,” added Rachel Tiven, the CEO of Lambda Legal.

As Tiven suggests, the Friday brief is indicative of Sessions’ storied anti-LGBT history, a politician whose three decades in public life have earned him a zero rating from the HRC. He has repeatedly opposed adding sexual orientation and gender identity to the purview of hate crime legislation, claiming that the LGBT community no longer “[faces] that kind of discrimination.” Sessions voted in 2006 to add an amendment to the U.S. Constitution blocking marriage for same-sex couples. And prior to his career in politics, Sessions tried to keep an LGBT conference from meeting at the University of Alabama while he was a district attorney.
The decision not to defend the Obama guidelines is also a reminder, though, of what the Trump administration has said it would do all along: repeal federal protections for trans people. During an interview with Focus on the Family’s James Dobson in 2016, Vice President Mike Pence referred to the policy as federal overreach.

“There’s no area of our lives too small for them to want to regulate,” Pence said, “no aspect of our Constitution too large for them to be willing to ignore. . . . These questions that come up, Donald Trump and I both believe not only can be resolved with common sense at the local level, but they are every single day, working with parents and administrators and teachers. These issues, I can tell you, are resolved in the state of Indiana whenever they come up, and they should be resolved with the safety and well-being of our children first and foremost, their privacy interests and rights and with common sense.”

This rhetoric is very similar to that employed by former North Carolina Gov. Pat McCrory, who used a “common sense” argument to defend discriminating against the LGBT community. Just two months into the 2017 session, at least 14 states have introduced legislation along the lines of McCrory’s House Bill 2. Introduced last March, the bill forces trans people to use public bathrooms that correspond to the sex they were assigned at birth when visiting schools and government buildings.

This is an extremely fragile moment for LGBT rights, and a lack of vigorous defense from the DOJ will encourage the passage of even more such laws. Bills have most recently been filed for debate in Tennessee and South Dakota, the latter of which voted down an extremely similar piece of legislation last year.

Even more crucially, the brief filing could jeopardize G. G. v. Gloucester County School Board, a case scheduled to be heard by the Supreme Court next month. Virginia high school student Gavin Grimm, who is transgender, sued his school district after not being allowed to use the bathroom that corresponds with his gender identity. The Fourth Circuit of the U.S. Court of Appeals sided with Grimm last August, but that ruling was based on the Obama administration’s understanding of Title IX as it applies to trans students. If the Trump administration works to further undo that interpretation, the basis for that court’s decision is no longer valid.

Although the DOJ will not directly rule on the Grimm case, advocates had been hoping that the department would file an amicus brief in his defense. Sarah Warbelow, the legal director for Human Rights Campaign, told The New York Times that’s no longer likely. “The fact that they chose to say they were fine with this injunction applying nationwide certainly suggest that will not be the case,” she said.
This development may be distressing, but it should not be surprising. While claiming he would “protect everybody,” Trump told The Washington Post last year that his administration would do the exact thing that it is doing right now. Perhaps if more people had believed him, the LGBT community wouldn’t be facing this situation.