Flynnghazi keeps getting stupider: Trump has every possible reason to fire Michael Flynn, but won't 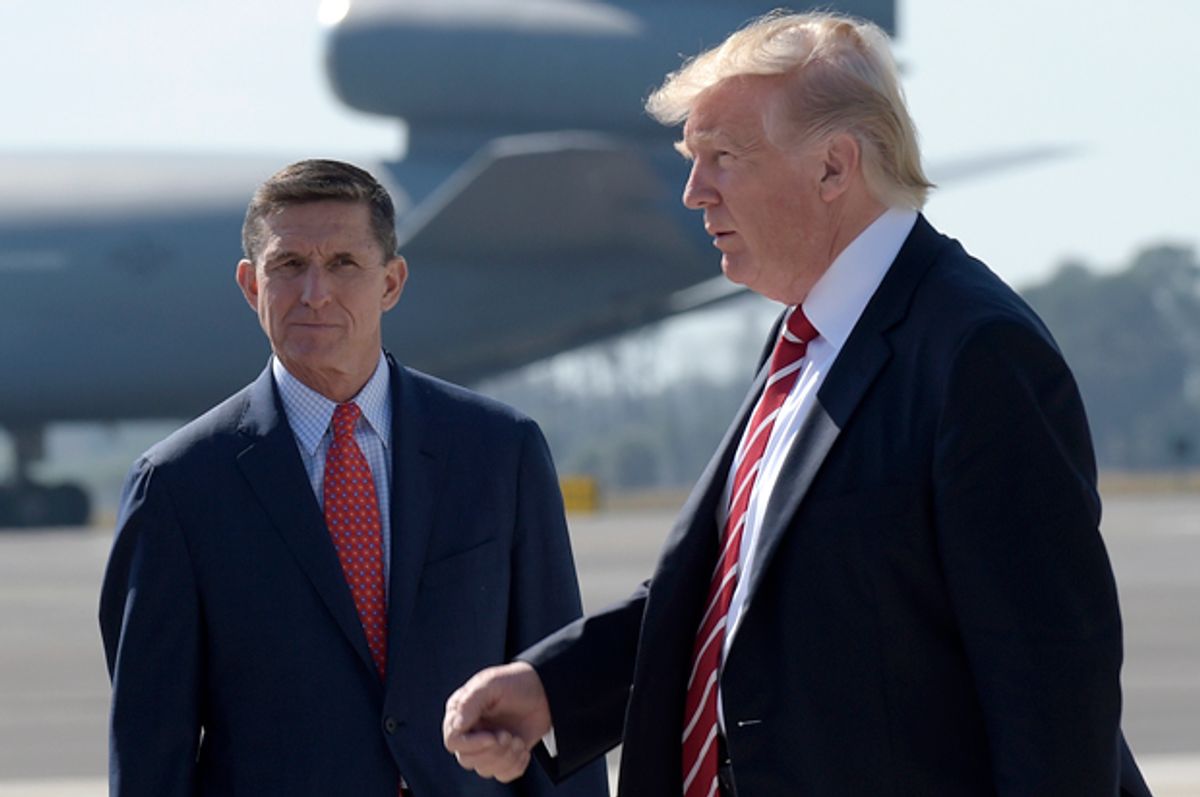 Why does national security adviser Michael Flynn still have a job? It’s amazing to be asking that question less than a month into a new presidential administration. But ever since The Washington Post reported last week that the retired general with noxious Islamophobic views apparently lied about his contacts with Russian officials, the argument for firing Flynn is looking pretty strong. Yet President Donald Trump has shown no sign of having lost confidence in his top national security adviser.

Here’s a quick recap of what’s going on: Last month news broke that Flynn had been in contact with Russia’s ambassador to the United States several times throughout the presidential transition; this includes five phone calls on the day the Obama administration announced sanctions against Russia for its alleged attempts to interfere with the 2016 elections. At the time, Flynn adamantly denied that the sanctions had been discussed, and other senior administration officials (like Mike Pence, then the vice president-elect) vouched for Flynn.

The Post report from last week debunked those denials: Flynn did discuss sanctions with the Russian ambassador. Flynn also walked back his previous denial; a spokesperson told the Post that while Flynn “had no recollection of discussing sanctions, he couldn’t be certain that the topic never came up.”

Flynn wasn't truthful about his (potentially illegal) contacts with a foreign power, and his lie was promulgated across media outlets by other key personnel in the White House. Assuming that Trump was not aware of what Flynn was up to, he now has reason to doubt the truthfulness of what his national security adviser tells senior White House staff. To that point, Pence’s team is leaking to the press that Flynn deceived the vice president. That’s reason enough to force him out.

But neither the president nor anyone on his team has had anything substantive to say about this serious, metastasizing scandal swirling around one of Trump’s top aides. The president has made it through two press conferences since the Post story broke and faced zero questions about it (by calling on reporters from sympathetic outlets). Asked by reporters on Air Force One if he had any reaction to the Post story, Trump claimed (against all sense and logic) that he hadn’t even heard about it. One of Trump’s other top aides, Stephen Miller, did a round of Sunday news shows and offered no insight about Trump’s thinking on Flynn, saying the question was better suited for the president himself.

Without any official comment from the president or his subordinates on Flynn’s status within the White House, reporters are grubbing for leaks and resorting to, ahem, Kremlinology to gain a sense about how the president feels about his top national security adviser. One senior administration official told CNN that Flynn doesn’t expect to resign or be fired. Other leaks to The Wall Street Journal have indicated that Trump still has confidence in Flynn and just wants to move on.

This information vacuum is unsustainable, particularly if more revelations dribble out about the national security adviser’s compromised position — which seems bound to happen, given the way people inside the administration have weaponized leaks to undermine their colleagues, protect their reputations and secure the favor of the president.

That leads to the final point to be drawn out from all this: Donald Trump is weak, and his weakness is being exploited by his underlings in a way that undermines his presidency.

Trump makes bad staffing decisions (if he makes them at all), he hires people for terrible reasons and he sticks with incompetent personnel for still worse reasons. Flynn was clearly tapped for his top national security role because the retired general was a sycophant and campaign loyalist. Flynn’s exotic and virulent attitudes toward Islam likely resonated with Trump, but the quality the president values most in people is whether they’re sufficiently loyal to Donald Trump. There are plenty of retired generals out there, and most of them weren’t forced out of high-ranking national security posts for managerial incompetence. Flynn was the one who told Trump what he wanted to hear.

The president has every reason to fire Michael Flynn, and he very well might at some point in the near or distant future. As long as Flynn remains as national security adviser, it will look as if Trump was either complicit in Flynn’s behavior (or condones it) or just can’t bring himself to get rid of a toady who has disgraced the administration.