Pilot season is in full swing and networks are looking for red state programming. But what does that mean? 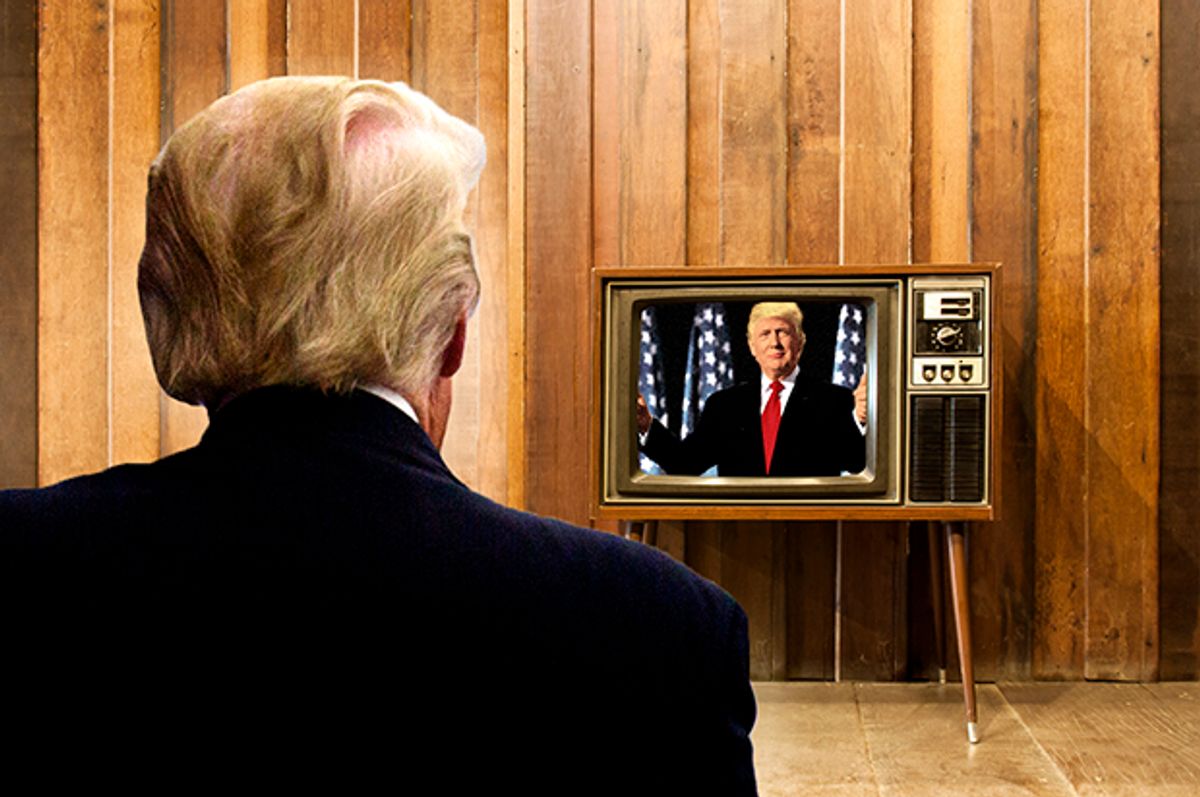 Hollywood is currently in the heat of pilot season, the time of year when TV producers and studios lobby broadcast networks for a shot at having their series appear on the 2017-2018 schedule. A number of pilots already have been picked up, meaning some very important industry people have been given the green light to shoot one episode of a potential show — a calling card, if you will.

One would think that quality has something to do with a pilot’s success, and in some cases it does. But the traits networks are looking for change from season to season, and cultural trends can be an even more powerful determinant of whether a pilot leads to a full-fledged series than originality or artistic vision. Thus the top story of recent months, Donald Trump’s political ascendance, is affecting the current pilot season.

Looking at the collective hand-wringing and soul-searching that took place following the November election, this shouldn’t come as much of a shock. Hollywood sustained a portion of the focus in the postelection blame game, as media analysts pondered whether the broadcast networks had catered too heavily toward an elite liberal view of America while failing to depict stories of working-class Americans.

ABC’s entertainment president, Channing Dungey, admitted as much in a statement made at the 2016 Content London conference, held from Nov. 9 through Dec. 1. “With our dramas, we have a lot of shows that feature very well-to-do, well-educated people, who are driving very nice cars and living in extremely nice places,” she told conference attendees, adding that there's definitely still room for those types of stories. “But in recent history we haven’t paid enough attention to some of the true realities of what life is like for everyday Americans in our dramas.”

She has a point. None of the families featured in ABC’s highest rated comedy, “Modern Family,” live in cramped homes. The same is true of the broods on “Black-ish” and “The Goldbergs.” All three of those series  have been lauded with far more critical appreciation than “Last Man Standing,” which stars red state favorite Tim Allen, or “The Middle,” helmed by vocal conservative Patricia Heaton. “Last Man Standing” also happens to be ABC’s second most popular comedy in Nielsen’s ratings for the season thus far for the total audience and the 18-to-49 demographic.

According to industry trade reports, the Alphabet network appears to be course correcting for the fall. Among the pilots under consideration is a yet-to-be-titled drama from Marc Cherry (creator of “Desperate Housewives”) starring Reba McEntire as a small-town Kentucky sheriff who teams up with an FBI agent “of Middle Eastern descent” to solve a brutal crime.

“Black-ish” creator and showrunner Kenya Barris is one of the executive producers attached to an ABC comedy called “Libby and Malcolm,” with Felicity Huffman and Courtney B. Vance cast to play political pundits from opposite sides of the spectrum who fall in love. ABC’s also looking at “Raised By Wolves” a sitcom featuring a financially-strapped Midwestern mother doing her best to raise her five kids.

Dungey’s network is far from alone in injecting more red-state-friendly themes into its programming slate. Over on Fox a military soap thriller loosely based on “Behind Enemy Lines” is in contention. NBC has “Drama High," the story of a high school drama department in a working-class community, and a military-focused hour-long show titled “For God and Country.”

CBS has drama pilots about Navy SEALs, a SWAT lieutenant (based on the 1970s-era TV series “S.W.A.T.”),  a CIA operative turned New York Police Department consultant, and a former general counsel for the National Security Agency who turned into a whistleblower. Among its comedy competitors is a show about a blended family headed by a woman who had kids by three different fathers. Even The CW, home of award-winning “Jane the Virgin” and “Crazy Ex-Girlfriend” as well as numerous superhero titles, is evaluating a pilot titled “Valor,” set on a U.S. Army base that houses an elite unit of helicopter pilots.

Also under consideration at The CW is a reboot of “Dynasty,” the gaudiest prime-time soap about rich people that ever aired. And this leads to an important question: What exactly is a “Trump TV” series? How does the Trump voter’s taste differ from anything we’re seeing on television right now?

Gambling a network’s fortunes on this particular shift in culture comes with the additional risk of making false assumptions about what red state viewers truly want to see. Both sides of the political spectrum are composed of a wide array of socioeconomic stratifications.

White-collar Trump voters, for example, may have very different motivations and stories than the president's blue-collar supporters, for example. An office comedy may be easier for higher earners to relate to than any of the aforementioned pilot possibilities. Those same people may turn up their noses at, say, “Duck Dynasty.”

Then again, a decent series starring Reba McEntire has an excellent shot at attracting all comers into its tent; the country music performer is part of a select group of stars who are reliable audience magnets. (See Allen and “Last Man Standing.”)

If one were to cross-reference some of Trump’s campaign assurances with what Nielsen’s season-to-date rankings are telling us, his voters already have a preferred network in CBS. America’s “crime-time” destination has long been a favorite among Republican voters, and its reign stands to continue under the self-proclaimed “law and order” president. But it also began long before Trump hit the campaign trail. Where “CSI: Crime Scene Investigation” was the George W. Bush era’s big hit, “NCIS” was the hawks' escapism of choice during the Obama years.

Nielsen’s main ratings are compiled breaking down viewers by age, although they can be parsed into segments based on age, gender, ethnicity, economic status and geographic area. In contrast, E-Poll Market Research regularly conducts tracking surveys about television series based on consumer attitudes.

In E-Poll Market Research's July 2016 analysis of favorite TV series, four of the 10 most popular series among Republicans polled were CBS shows. Three of those CBS series are about law enforcement: “NCIS,” “Blue Bloods” and “Scorpion.” Rounding out the rest of the top 10 are three CW series, “Supernatural,” “Arrow” and “The Flash,” as well as AMC’s “The Walking Dead,” NBC’s “Grimm” and “Last Man Standing.”’

Asked for some indication about trends for the 2016-2017 season, E-Poll spokesman Randy Parker shared that CBS’s "Code Black" and "Mom," as well as NBC’s "Superstore," are all substantially preferred among Republicans.

NBC’s "This Is Us," one of the new season’s biggest breakout shows, appears to be more popular among Republicans "by a significant amount," Parker said. He also stressed, however, that it’s still too early to make any definitive conclusions. Meanwhile, Democrats seem to prefer ABC's "Black-ish"and "Speechless," Fox's "Empire," and CBS' "MacGyver."

Republicans, according to the firm's 2016 press release, "prefer programs that are family-friendly, funny, plot driven or have storylines that involve ‘good vs. evil.’ These shows may be more appealing to supporters of Trump."

Sure, the other CBS show that is highly favored by Democrats, according to E-Poll, is “The Big Bang Theory,” currently the top-rated series on television. “Big Bang” also is popular among Democrats, as is “Supernatural” and “The Walking Dead.” Another drama that Democrats enjoy  is “Nashville,” which moved from ABC to cable’s CMT this season.

Granted, one of the toughest lessons that the media learned in covering the election is that analysis of polls is only reliable to a point (although they’re more reliable than gleaning inferences about viewing habits based on Facebook "likes" that may not have been updated in years).

In any gambling situation, every bit of information is useful — and the pilot season is nothing if not a gigantic industry casino. Networks and advertisers place chips on a roulette wheel with numbers and colors that are constantly moving to new locations within the circle. Then they wait for a croupier that isn’t scheduled to show up for months.

America revealed its riven emotional state in November; this much we know. What the television audience wanted then and what it wants to watch now may be very different than what viewers will end up flocking to in September or October.

Returning to Dungey’s point, broadcast television is overdue for cycling back toward stories about people living from paycheck to paycheck, who don’t drive the nicest of cars and who send their kids to private schools. Struggle generates loads of drama and comedy; that’s the story of real America right now, a descriptor not limited to the Midwest or the South or Trump's voters. It’s also true for along the coasts, in cities and in suburbs. This describes the majority of the population, Democrat, Republican and independent.

If the industry’s perceived sea change in American culture leads to provocative, smart broadcast shows that thoughtfully reflect that experience, television can only improve.

But can we refrain from calling such a trend Trump TV? In television, the winners tend to be determined by popular vote.