So far, the resistance hasn't reached Trumpland — and that needs to change

Despite Trump's dreadful beginning as president, his supporters still love him. Can their minds be changed? 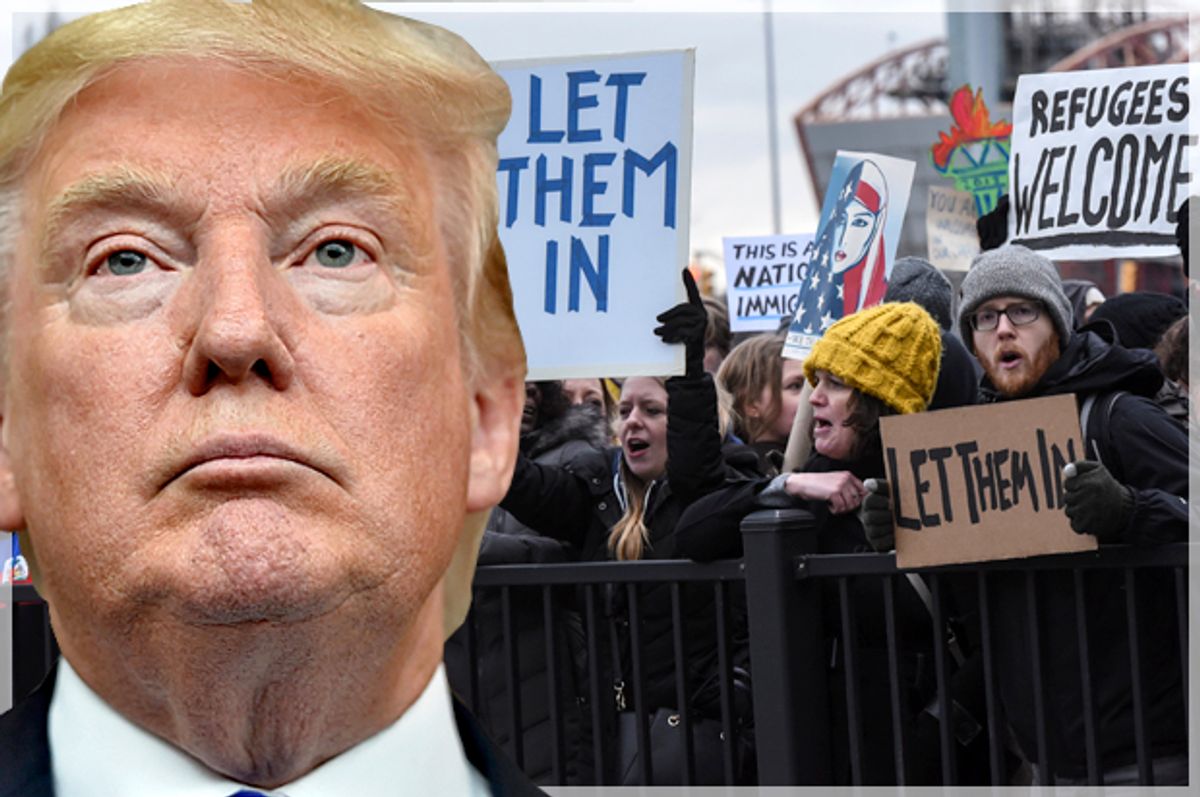 Last week Public Policy Polling released a poll showing that 51 percent of voters who support President Donald Trump’s attempted Muslim ban believe that the Bowling Green massacre, a figment of Kellyanne Conway’s insufferably vivid imagination, is one of the reasons why it’s necessary. This is incontrovertible proof that the disinformation campaign that has been orchestrated by the Trump White House, along with its allies on Fox News and talk radio, is working. The message of the resistance hasn’t broken through Trump’s wall of mendacity. We’ll circle back to this.

It became abundantly clear throughout the 2016 campaign that Trump was being judged by a different set of rules than anyone else who had previously run for president had been. “Unfair” barely begins to describe how Hillary Clinton's pair of alleged scandals — the email server and, of course, Benghazi — were major drags on her candidacy, even though she was cleared of all wrongdoing by multiple Republican-led investigations.

Meanwhile, there was Trump's string of blurts, gaffes and scandals — each individual instance, especially the ongoing bombshell about Russian collusion to hijack the election, would not have simply destroyed any other presidential campaign. It would have annihilated the very existence of any non-Trump candidate.

Trump is still getting away with his mendacity.

He continues to blurt, shout and sign obnoxious things, yet his approval numbers continues to hover in the 40 range. Granted, this is a historically low percentage for a newly inaugurated president who's supposed to be enjoying his political honeymoon. And it’s entirely possible his ratings will dip significantly lower or it could continue to hold steady around that level. We don't know yet, despite our hoping for much, much lower.

The truth is, though, his numbers should be in the teens right now, with only the Alex Jones crowd and the alt-right still clinging desperately to the floating door as the orange Titanic flounders. The list of horrible things Trump has said and done in just the first several weeks of his presidency are so unprecedented for a sitting chief executive, there's really nothing in the modern era to compare him with. His increasingly obvious collaboration with Russian President Vladimir Putin to skew the election should be enough to anchor his presidency to the 10 percent to 20 percent approval range. In any other circumstance, with any other president in the Oval Office, he or she would have been impeached immediately following his inaugural parade.

Couple the large-scale Russia scandal with Trump's explosive diarrhea of horrendous tweets and public statements, along with the fact that his own staffers think he's mentally unstable, and there's simply no logical reason why Trump hasn't been driven from office in disgrace.

Trump's remarks during his Super Bowl interview with Bill O'Reilly alone should have triggered an army of his voters to storm the White House, demanding that their votes be rescinded. In any other year, with any other president in the White House, suggesting that America is equally as despotic as Putin's Russia would have destroyed that president. It's difficult to think of a less patriotic thing spoken in public by a sitting president. Then again, there’s always tomorrow.

It's possible, though not likely, that Trump doesn't know exactly how disgusting the Putin regime has been to dissidents — or maybe he does and, given that Putin's hit list is mostly journalists, Trump doesn't care. According to PolitiFact, 34 journalists have been murdered in Russia since 2000, when Putin rose to the presidency there. In the past several weeks alone, we've read about no fewer than three Russian operatives either falling seriously ill, being black bagged and disappeared or dying under mysterious circumstances. Somehow, in Trump's necrotic brain, there’s no disconnection whatsoever between being the head of the party of American exceptionalism and declaring that America is just as unexceptional as Russia.

Yet Republicans still support Trump by overwhelming margins. Eighty-six percent of GOP voters still approve of Trump’s job performance so far, despite a series of horrendous statements, embarrassing gaffes and a huge loss on a major campaign promise (the Muslim ban). At the same time, MSNBC contributor and former Bush administration communications director Nicolle Wallace told Brian Williams last week that she's been in touch with a group of Trump voters to gauge their ongoing reactions to Trump's presidency and her focus group of Western Pennsylvania Trumpers appears to be quite satisfied with supporting the president.

The problem here is obvious. Voters who still support Trump aren't getting the news. The ongoing Trump catastrophe isn't breaking through the firewall of disinformation on Fox News or AM talk radio, and so Trump's popularity remains unnaturally higher than it should be. Shockingly, much of the news many people read and watch throughout a typical day is being intercepted and buried by pro-Trump media outlets and publications, making it virtually impossible for Trump voters to get a full taste of how irresponsible they were by electing a professed sexual predator or a mentally unstable game-show host to be president.

No wonder a majority of "Muslim ban" supporters think a massacre that never happened is real. Suffice to say, this needs to change. I'm neither an organizer nor an activist, but here's what has to happen. And soon.

First, Democratic A-listers like Michelle Obama, Bernie Sanders, Elizabeth Warren, Cory Booker, Tim Kaine, Joe Biden and, yes, Barack Obama must be dispatched into red districts to conduct town halls and listening sessions with Trump voters. Use the Chris Hayes town hall with Bernie Sanders from a while back as a template for how best to talk to this demographic. Another possibility is for this same group of Democrats to appear on local television newscasts in GOP-dominant markets. If the Democratic economic populist message is framed just the right way, centered around economic fairness and making the super-wealthy pay their fair share, it will be possible to begin turning those red areas purple and the purple areas blue.

This mission is an urgent one. It has to be kicked into gear before the midterm campaigns are underway because, at least initially, the effort to get the word through the firewall should be focused on winning hearts and minds, and not to pitch random congressional candidates. It has to be about selling the ideas and the truth about Trump's madness rather than campaigning for picking up seats in the House. Sure, selling Democratic candidates up and down the ballot will eventually have to follow suit. But for now, driving the Democratic message through the firewall has to be the priority and the foundation for running challengers in 2018.

Next, activists need to focus more on convincing moderates, independents and especially the notorious Obama voters turned Trump supporters (those who backed Obama in 2008 and 2012 but voted for Trump in 2016). So far, liberal activists have been doing a stellar job relentlessly surrounding the embattled regime — even going so far as to restrict Trump's ability to travel due to concerns about protesters. This is marvelous to observe and hopefully the effort will only grow stronger as we continue to see blood in the water.

Another way to get the word out is to call conservative talk radio shows. This means average citizens as well as Democratic leaders. The left has to stop ignoring or running away from conservative media. Obviously there are programming impediments that could block Dems from appearing on Fox News, but there's nothing wrong with trying. Radio producers in particular are constantly starved for guests and listener participation. Again, be respectful but forceful. Don't concede.

Lastly, it's imperative that Democrats and Berniecrats alike begin to run for local office. It's not overly expensive to run for city council or school board, but the ultimate impact of hundreds of liberals running and perhaps winning would be tremendous. Branching out into red regions of the country doesn't mean pandering to Trumpers or conceding on policy. It doesn't mean forgiving their atrociously bad judgment in electing Trump in the first place. One way or another, though, there needs to be an organized incursion into red America — into Trump's America. Otherwise, we're just preaching to the choir and getting nowhere, while Trump is normalized and the views of his supporters increasingly metastasize. The time is now.