Getting raped didn’t make me superhuman. “Split” exploits the real struggles of people who have been assaulted 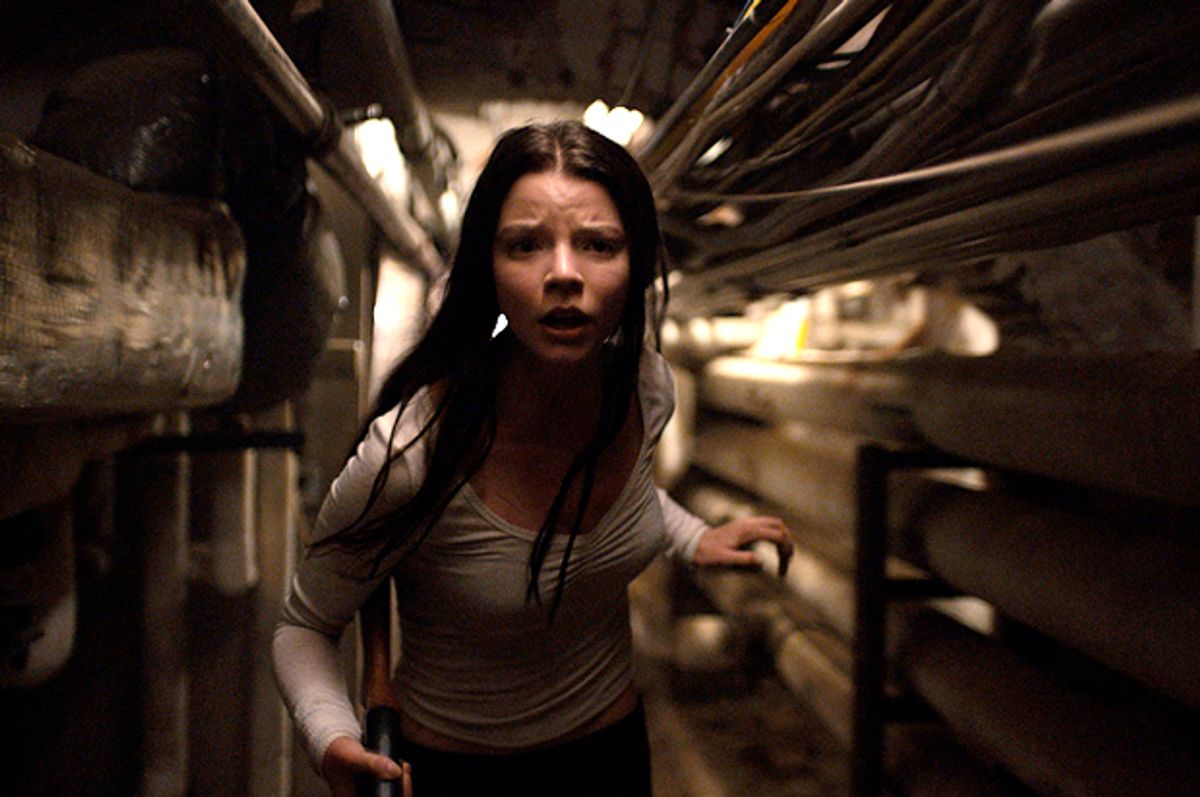 “Split” is being called M. Night Shyamalan's best film in years, although that’s faint praise for the director who brought us Mark Wahlberg fighting evil wind and whispering to plants. It’s certainly a return to content, if not exactly form, for the embattled auteur.

In “Split,” he revisits an old theme, the impact of abuse on young adults. A young Mischa Barton plays Kyra, a preteen girl who dies from a mysterious illness after being poisoned by her mother, in “The Sixth Sense,” Shyamalan’s breakout film. Here Anya Taylor-Joy (“The Witch”) steps in as Casey Cooke, a high school loner who picks fights with faculty members to get sentenced to detention and get away from the other students. After Casey is kidnapped along with two of her classmates by Kevin (James McAvoy), a man suffering from Dissociative Identity Disorder, it’s revealed the two have something in common: They’re both survivors.

How “Split,” which just cleared $100 million at the box office, handles this abuse is at best woefully misjudged and at worst horribly distasteful, a galling affront to anyone who has actually experienced sexual assault.

During the early 2000s, Shyamalan was Hollywood’s next big thing. “The Sixth Sense” was a surprise box office phenomenon, earning over $600 million en route to six Oscar nominations. Hailed as the next Steven Spielberg, he would go on to make “Unbreakable” — a moderate critical and commercial success — before unleashing a string of duds on audiences. First there was “The Village,” whose twist you can discern from the marketing campaign, and then “Lady in the Water” and “After Earth.” A critic for the New York Post quipped that his movies were the work of the devil, a criticism Shyamalan answered by literally making a movie called “Devil.”

Despite these efforts’ mixed reputations, Shyamalan shows a remarkable gift for building tension. There’s a scene in “Signs” that is one of the most chilling I’ve ever experienced in a theater: A family huddles together in their boarded-up home as an unseen presence pounds on the wood, searching for entry. They have no choice but to await its arrival. The moment’s simplicity is what imbues it with a singular sensation of terror.

Prior to the recent success of “Split,” Shyamalan launched a mini-comeback with last year’s “The Visit.” A microbudget thriller from prolific horror producer Jason Blum (“The Gift”), it was a reminder that the director works best on a small canvas.

Two children (Olivia DeJonge and Ed Oxenbould) take a vacation to visit their elderly grandparents, from whom their mother (Kathryn Hahn) has been estranged their entire lives. The elders immediately begin acting strangely. Nana (Deanna Dunagan), who scratches at the door in the wee hours of the morning, invites her granddaughter to clean out the oven by climbing into it. “The Visit” explores our primal fears of aging with a sly comedic undertone, a necessary rebuke to the self-seriousness of the director’s earlier work. Shyamalan, it seems, had finally learned the error of his ways.

“Split” shows that while Shyamalan still knows how to send a chill up your spine, he has not outgrown his most repulsive tendencies. If you are not outraged by the time the credits roll, you weren’t paying close enough attention.

The film features top-drawer performances by its actors, particularly McAvoy, who does a seamless job navigating Kevin’s 23 personalities. The Scottish actor, who first made an impression on American audiences as a lovelorn soldier in “Atonement,” is a campy hoot as “Patricia,” a Mrs. Doubtfire-type who prophesies the coming of The Beast, the 24th persona nestled inside Kevin. She warns that The Beast is superhuman, a creature who climbs walls like a spider. Described as nine feet tall with long fingers, The Beast sounds like a monster out of a campfire tale — a spooky thing that lurks in the dark corner of your imagination.

But he is far from fiction. Dr. Karen Fletcher (Betty Buckley) is a psychiatrist who has been working with Kevin for years, although she primarily interacts with “Barry,” a sensitive fashion designer who shows her his sketches. The doctor believes that people with Dissociative Identity Disorder have learned powers of which the rest of us could only dream, the ability to rewire their bodies. One of Kevin’s personalities, Jade, claims that she’s diabetic — while the others are not. Kevin’s new personality is proof of her claims.

Shyamalan, who also wrote the film, isn’t the first to suggest that people who are different are capable of extraordinary feats. In the long-running “X-Men” film series, McAvoy slipped into Patrick Stewart’s wheelchair to play Charles Xavier, a paraplegic man whose status as a mutant lends him potent psychic abilities. Multiple studies have likewise found links between neuroatypical brains like Kevin’s and genius.

But — and with Shyamalan’s work there is always a “but” — what makes Kevin special isn’t merely that he can transform his body into an all-powerful being. It’s that his parents beat him when he was a boy. In a flashback, Shyamalan reveals that Kevin’s mother was like Patricia, a strict disciplinarian who would strike him with a coat hanger when he wouldn’t behave. That means that the man shares a great deal in common with Casey, whose pedophile uncle (Brad William Henke) has been molesting her since she was very young. After her father passed away, her abuser became Casey’s legal guardian.

A pivotal scene upends the trope of the Final Girl, a young virgin who is spared because she is untouched, and should be cause for celebration. Instead it’s everything that’s wrong with “Split,” a movie that’s thrilling until you learn what it’s really up to.

Casey’s classmates (Haley Lu Richardson and Jessica Sula) are devoured by The Beast after being locked for countless days an underground bunker. The setting evokes Ariel Castro, the Cleveland man who kept three girls in his basement for a decade while he sexually assaulted them. A shamefully lurid bit of framing makes the creature’s feast look like cunnilingus; he feeds on the girls’ lower halves off-camera. But when it comes to making Casey his meal, The Beast backs down after seeing the scars of sexual abuse flayed across her stomach. He realizes that she, too, is special because of her history. They are the same.

It was in “Twilight of the Idols” that the German philosopher Nietzsche coined his famous aphorism on the ability of humans to survive — and even thrive — following horrific tragedy. “That which does not kill us,” he wrote in the 1888 text, “makes us stronger.” The maxim has proven popular enough to inspire both a Kelly Clarkson song and the title of a Mark Ruffalo movie.

Research has shown that there’s some truth to that aphorism: A 2011 study published in the Journal of Personality and Social Psychology found that people who have experienced a moderate amount of trauma are better equipped to handle trying and difficult situations than those who have never lived through anguish or heartache. Those findings make a great deal of sense. For those who are unaccustomed to loss, the unexpected passing of a friend or family member may be particularly intense because they haven’t been forced to develop the tools to cope with these new feelings.

But after a certain threshold of pain, participants no longer showed healthier life outcomes as a result of their anguish. They began to regress.

That’s what studies have shown happens with people who survive sexual assault; the added grief is just scar tissue. Although many go on to lead successful lives in spite of their abuse, they are not made stronger as a result. In fact, many rape survivors will still face the effects of Post Traumatic Stress Disorder decades after the attack. The Rape, Abuse & Incest National Network estimates that 94 percent of sexual assault victims will experience PTSD in the weeks following the initial incident — and 11 percent of those people will continue to throughout their lives.

Getting raped didn’t make me superhuman. It made me feel disgusting and lonely. When I told my boyfriend that I was sexually assaulted at a party while I was drunk — and that my assailant didn’t stop when I told him no or even when I started crying — he accused me of cheating on him. Years later, a friend put his hands down my pants at a bar, and the memories of that night came flooding back to me — my rapist’s breath on my face, my crippling inability to move. Startled, I left the bar in tears and went home to text the guy I was seeing, hoping that I would get support from someone who would understand.

He didn’t tell me it would be OK or that I deserved to be loved by someone who wouldn’t violate me as if I meant nothing. He asked me if I liked it.

I think about what happened to me more days than I don’t. Sometimes I’m angry at myself for not fighting back, not biting him, and not screaming with every breath in my body. Sometimes I wonder where he is or if he even knows what he has done to me. Does he think about it? The last time I looked him up on Facebook, he had a son in his profile photo. That fact doesn’t make me stronger. Thinking about him as I drink my coffee in the morning doesn’t give me the power to get through my day. The continued fact of him feels like a clenched fist inside me, and I want so badly to let go.

“Split” exploits the real struggles that people who have faced sexual assault go through for what amounts to nothing more than a “Get Out of Jail Free” card for lazy writing. Because The Beast is impervious to bullets, Shyamalan can’t devise any other way that Casey would survive being trapped with him. How else would you be able to defeat an all-powerful creature except to make him relate to you?

What’s so disappointing about the film is how fixable its problems are. “Split” would be a much better film if Kevin, even though he believes himself to be an Übermensch, were all too human, and the creature -- who insists that even the sharpest knife cannot puncture his supernaturally thick skin, is fragile and breakable — merely the creation of a man telling himself a story in order to survive in the world. But when “Split” proved Kevin right by showing that his abuse has given him godlike powers, I felt that fist squeeze tighter. For some, that pain might go away, but for me, it did not. In that aspect at least, I know that I’m not alone.

Two decades into his career, Shyamalan is still finding new ways to piss off his audience. For the man who directed “The Last Airbender,” this is nothing if not a stunning feat.