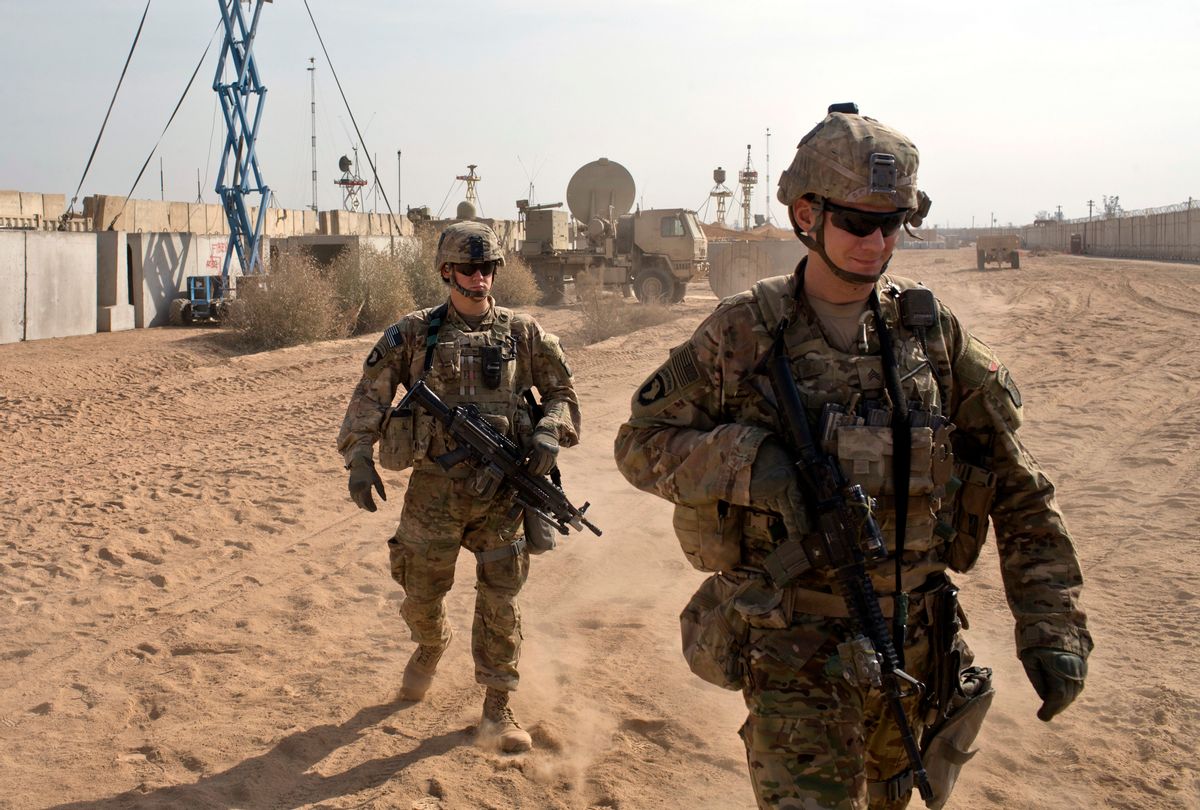 FILE - In this Nov. 9, 2016 file photo, U.S. Army soldiers move through Qayara West Coalition base in Qayara, some 50 kilometers south of Mosul, Iraq. Reverberations from President Donald Trump’s travel ban and other stances are threatening to undermine future U.S.-Iraqi security cooperation, rattling a key alliance that over the past two years has slowly beaten back the Islamic State group. Iraq’s prime minister, Haider al-Abadi, has sought to contain public anger sparked by the ban and by Trump’s repeated statements that the Americans should have taken Iraq’s oil, as well as his hard line against Iran, a close ally of Baghdad. (AP Photo/Marko Drobnjakovic, File) (AP)
--

BAGHDAD  — Reverberations from President Donald Trump's travel ban and other stances are threatening to undermine future U.S.-Iraqi security cooperation, rattling a key alliance that over the past two years has slowly beaten back the Islamic State group.

Iraq's prime minister, Haider al-Abadi, has sought to contain any backlash from public anger sparked by Trump's executive order banning Iraqis from traveling to the U.S. Also breeding resentment and suspicion are Trump's repeated statements that the Americans should have taken Iraq's oil and his hard line against Iran, a close ally of al-Abadi's government.

Al-Abadi and Trump spoke Thursday night for the first time since Trump's inauguration. The U.S. leader, who has pledged a stronger fight against IS militants, promised increased help for Iraq against terrorism, and al-Abadi asked him to remove Iraq from the travel ban, according to an Iraqi official who spoke on condition of anonymity to discuss the telephone call.

Iraqi anger at Washington comes at a crucial juncture in a long and often contentious relationship. U.S.-backed Iraqi forces are about to launch an assault aimed at retaking the western half of Mosul that is still under Islamic State control. If Mosul is completely secured, it largely would break the extremist group's "caliphate" in the country.

However, Iraqi and U.S. officials have said maintaining security in a post-IS Iraq will be just as difficult — preventing a resurgence of the militants and containing political divisions among Iraq's Shiites, Sunnis and Kurds. Both countries have talked of keeping some U.S. troops long term to back Iraq's security forces in that task, a recognition that complete American withdrawal at the end of 2011 was a mistake.

Now the Iraqi leader is coming under pressure. Lawmakers are demanding he reduce cooperation with Washington in the future, limit or prevent American troops from staying in the country after the defeat of IS, and reciprocate for any travel ban on Iraqis. Members of powerful Shiite militias have outright warned of retaliation against Americans if the U.S. carries out any military action against Iran, their patron.

"There will be a general consensus that Americans should not stay in Iraq after Mosul, after the statements and the executive order from Trump," he said. "We believed that we had a strategic agreement with the U.S."

"We are fighting ISIS on behalf of the entire world," he added, using an alternative acronym for IS. "This has been a severe, severe disappointment among all Iraqis."

Publicly, al-Abadi has maintained measured tones. While he called Trump's ban an "insult," he refused to enact a reciprocity measure despite a strong call from Parliament to do so.

The U.S. government has been reaching out regularly to al-Abadi's government to try to prevent the situation from escalating, sending the message that the U.S. is well aware of the potential consequences if Iraqis turn against it, said a U.S. official, who spoke on condition of anonymity because he wasn't authorized to speak publicly.

Thursday's call was seen as a positive step toward defusing some of the tension, with Trump telling al-Abadi he would see what he could do to lessen the impact on Iraqis who shouldn't be kept out of the U.S., the official said. Since Trump announced the order, many in the U.S. government have been encouraging the White House to remove Iraq from the list. Although there has been no indication that Trump plans to delist Iraq entirely, he could take steps to exempt more Iraqis from the ban.

Within Iraq's military, some are galled at being grouped in with terrorists by the travel ban when they have been engaged in slow, grueling combat against IS for more than two years.

Iraqi forces backed by U.S.-led air power and American special forces have pushed IS out of cities in western Anbar province, along the Euphrates and up the Tigris river valley to Mosul in the north. Since October, they have taken back the eastern half of Iraq's second-largest city.

"I have fought Daesh in Anbar, Fallujah, Salahuddin and now I'm currently fighting them in Mosul," he said using the Arabic acronym for IS. "We have given a lot of blood fighting Daesh."

Lukman Faily, the former Iraqi ambassador to the United States, said the ban still sways Iraqi perceptions of the U.S. despite being temporarily blocked by a U.S. federal court ruling.

Iraq's Kurds, who have autonomous rule in the north, have been more enthusiastic about Trump — despite the flap over his statements about Iraq's oil, some of which they control. That is in part rooted in the distrust of Iraq's Arab majority by many Kurds. Some Kurds welcome Trump's more unbridled tough talk against Islamic militancy, which many see as an Arab phenomenon, and believe it will bring Trump closer into alliance with them. Some have said they understand why the U.S. would bar Iraqis' entry — though they argue an exception should be made for Kurds.

Some in Baghdad and the Iraqi military would likely welcome stepped-up U.S. military help. But Trump's early moves frustrate an already rocky relationship with Washington.

After the U.S.-led invasion of Iraq that ousted Saddam Hussein in 2003, the American troop presence grew as high as 168,000. The war that ensued killed nearly 4,500 American troops and hundreds of thousands of Iraqis.

Many among the Iraqi public, as well as the military and political class acknowledged the need for — even welcomed — U.S. forces and political support. But that has been mixed with anger over abuses and civilian casualties caused by U.S. troops, as well as frustration that U.S. policy missteps following the 2003 invasion, including disbanding the Iraq army after Saddam's fall, helped foster the insurgency, eventually leading to the creation of al-Qaida in Iraq and later the Islamic State group.

The fight for Mosul has brought Iraq and the U.S. closer. There are now some 6,000 U.S. forces inside Iraq, U.S. troops have moved closer to frontline fighting and American special forces have conducted greater numbers of raids into IS-held territory aimed at taking out key leaders.

But Iraqi politics is still dominated by powerful Shiite blocs with close ties to Iran. Throughout his time in office, al-Abadi has struggled to balance his reliance on the two rivals, the United States and Iran.

A smaller U.S. presence in Iraq post-IS would likely usher in a larger role for armed groups with close ties to Iran, a scenario similar to what happened in the days following Mosul's fall in 2014. After IS overran nearly a third of the country in a matter of days, Iran swiftly came to Iraq's aid with fighters and weapons, while the U.S. waited for weeks to begin a campaign of U.S.-led coalition airstrikes.

The spokesman of one Shiite militia, Kataib Hezbollah, warned that his fighters were ready to target U.S. interests if the Trump administration goes too far against Iran.

"If the U.S. takes military action against Iran, we will return the favor," Jaafar al-Husseini said. "We have all the details of (U.S. troop) movements. They are right under our eyes.