The new alliance, which is led by former heads of extremist militias, calls itself Tahrir al-Sham 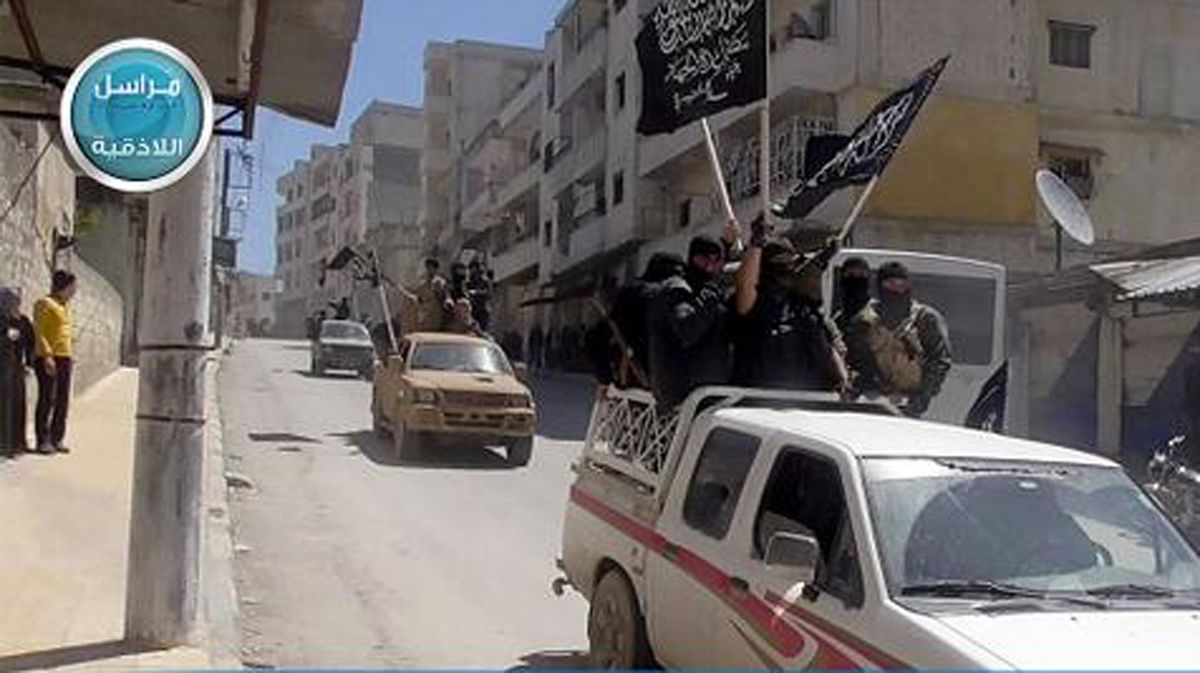 So-called moderate rebels in Syria that have been vetted and previously armed by the U.S. government and its allies have officially partnered with al-Qaeda's rebranded local affiliate in a new organization called Tahrir al-Sham.

Among the umbrella group's members is the Bin Laden Front—named for Osama bin Laden, the late jihadist financier who oversaw the 9/11 attacks. The Bin Laden Front is among the smaller fighting bands that helped comprise Jabhat al-Nusra, perhaps the most powerful rebel force on the ground in Syria.

In 2015, al-Nusra released a 40-minute propaganda video called "The Heirs of Glory" that celebrated the 9/11 attacks. The video confirmed the Syrian group's abiding ties to al-Qaeda's international network and its commitment to an extremist ideology.

A year later, al-Nusra rebranded as Jabhat Fatah al-Sham, insisting with little credibility that it had broken its ties to al-Qaeda's external leadership.

Nour al-Din al-Zinki has long been described as a major "moderate" rebel group. It was approved by the CIA and received TOW anti-tank missiles from the U.S. Al-Zinki entered the public spotlight in July for releasing a video in which it beheaded a teenager with a knife.

The new alliance, which is led by former heads of extremist militias Jabhat Fatah al-Sham and Ahrar al-Sham, calls itself Tahrir al-Sham (Arabic for "liberation of Syria").

"In view of the plots shaking the Syrian revolution... we announce the dissolution of all groups mentioned below and their total merger into a new entity named 'Tahrir al-Sham'," the militants said in a statement quoted by AFP.

They added that the group was created "in order to unite our banners and to preserve the fruits and the jihad of this revolution," according to a translation by the jihadi Syrian opposition outlet Bilad al-Sham Media.

Extremist cleric Abdullah al-Muhaysini, who is from Saudi Arabia but has established himself as a leading warlord in Syria, also joined Tahrir al-Sham, along with five other Salafi scholars.

The announcement of the new rebel alliance went largely unnoticed in the Western media. International news agencies Reuters and Agence France-Presse (AFP) published stories on Tahrir al-Sham, but the news wires were only reprinted by a small handful of outlets.

Promotion from neoconservatives in Washington

Nour al-Din al-Zinki, one of the influential members of the new al-Qaeda-led group, had long been touted as a leader in the putative moderate opposition. In its October 2015 "Syrian Opposition Guide," the neoconservative think tank the Institute for the Study of War, which is often cited by Western media outlets as an authoritative source on Syria, had listed al-Zinki as a "power-broker" and a moderate group "independent" of al-Qaeda.

The guide noted that al-Zinki was financed by the U.S.'s covert joint Military Operations Command in Turkey. The militia is now part of a formation with Jabhat Fatah al-Sham, which the U.S. government deems a terrorist group, despite its formally distancing itself from al-Qaeda and adopting a new name in July.

Likewise, the Institute for the Study of War listed the Idlib-based rebel groups Liwa al-Haq and Jaish al-Sunna, two more members of the newly formed Tahrir al-Sham, as potential allies in the fight against the Syrian government, classifying them as "Separable from Jabhat Al-Nusra."

The creation of Tahrir al-Sham came just days after six rebel factions joined the powerful jihadist group Ahrar al-Sham, which has been supported by Western allies Saudi Arabia and Turkey. The new members of this militia include the Idlib branch of Jaish al-Islam, the west Aleppo branch of al-Jabhat al-Shamiya, and the groups al-Wiyat Suqour al-Sham, Kataib Thawar al-Sham, Jaish al-Mujahideen, and Tajamo Fastaqim Kama Umirat.

This is by no means the first time ostensibly moderate Syrian rebels have collaborated with sectarian extremists. The Long War Journal, a project of the neoconservative think tank Foundation for Defense of Democracies, noted that the constituent members of the new alliance "have long cooperated with one another on the Syrian battlefields."

Nour al-Din al-Zinki, Liwa al-Haq, and Jaish al-Sunna had all, with Jabhat al-Nusra, previously been part of the alliance Jaish al-Fatah, which took control of Idlib. Other major militias like Ahrar al-Sham have fought alongside al-Qaeda against the Syrian government and its allies.

Idlib is the last major city controlled by Syrian militants. In a January event at the Atlantic Council, an influential think tank that is funded by Western governments and Gulf regimes, hawkish analysts who have repeatedly called for greater military intervention in Syria acknowledged that Idlib is "the heartland of al-Nusra," and a place of "hell" and "oppression."

A scholar at the event pointed out that Syria is the "newest and most important safe haven for [al-Qaeda's] ideology." The wartorn country is also home to al-Qaeda's largest physical presence in history.

Although Jabhat Fatah al-Sham, the rebranded former Syrian al-Qaeda affiliate, is one of the most powerful forces in the Syrian opposition, it has been excluded from ceasefires and peace talks.

The report furthermore described how the rebel groups have imposed draconian Sharia law on their subjects and carried out sectarian attacks against religious and ethnic minorities in the areas they controlled in Aleppo and Idlib.

“I was happy to be free from the Syrian government’s unjust rule but now the situation is worse," explained Bassel, a lawyer in Idlib, in the report. "I publicly criticized Jabhat al-Nusra on Facebook... The next morning Jabhat al-Nusra forces took me from my home."