While Republicans in the Senate call for an investigation, House GOP drag their feet in an effort to protect Trump 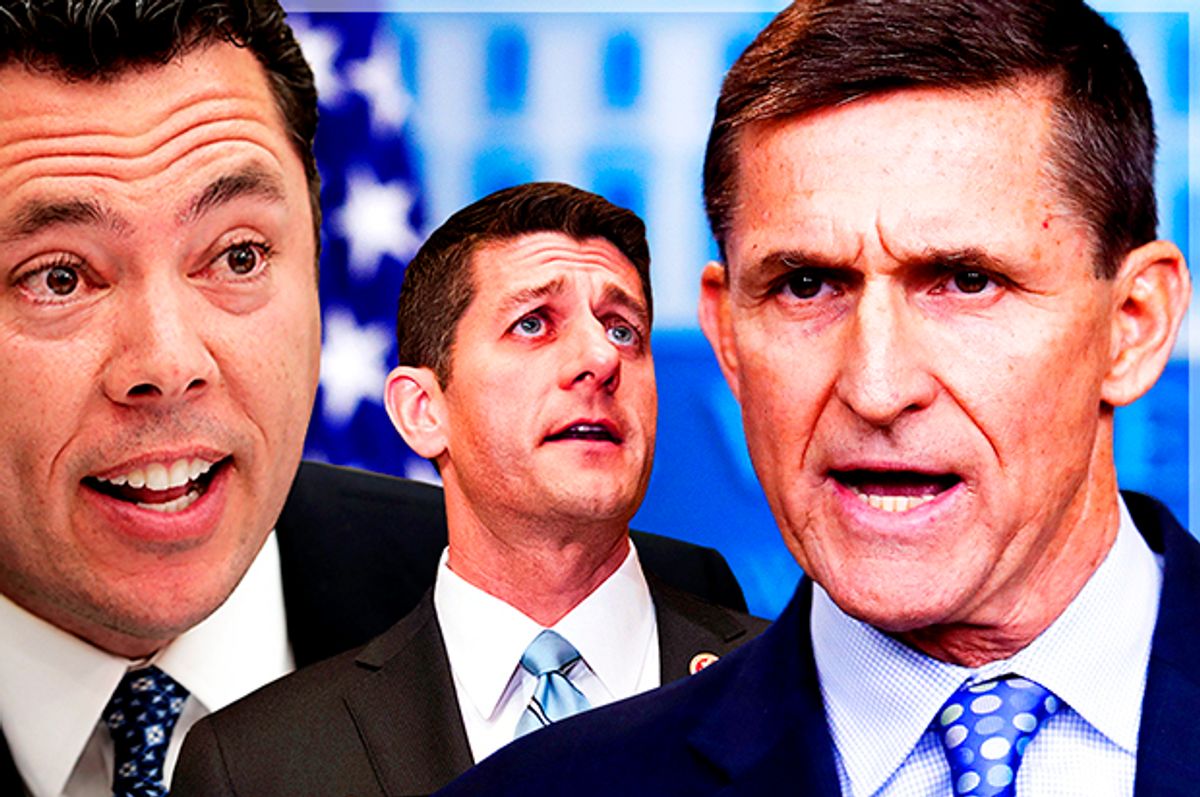 Shortly before midnight Monday evening, President Donald Trump's choice for National Security Advisor, Gen. Michael Flynn, resigned after it was revealed the Justice Department warned the White House that a discussion he had before Trump took office with a Russian diplomat made Flynn susceptible to blackmail. By mid-morning Tuesday, there were reports that the House Oversight Committee's phone lines were jammed over calls about the cascading Flynn controversy. Still, even as senior Senate Republicans lined up to call for investigations into the growing scandal Tuesday, their counterparts in the House showed little interest in potentially upsetting the Trump White House.

"I’m not going to prejudge any of the circumstances surrounding this until we have all of the information," GOP House Speaker Paul Ryan told reporters Tuesday, knocking calls for an independent investigation into the Trump administration's ties to Russia following Flynn's resignation.

Ryan added, "I'll leave it up to the administration to describe the circumstances."

Jason Chaffetz, R- Utah, chairman of the House Committee on Oversight and Government Reform, showed a similar lack of concern over how wide the Flynn scandal may spread.

“It’s taking care of itself at this point,” Chaffetz told reporters Tuesday when asked if he was "curious about what Trump aides knew about" Flynn.

Last week, attendees at a raucous town hall meeting in Utah chanted, "Do your job!" — a call for Chaffetz to launch probes into the Trump administration. Every Democrat on his committee also recently signed a letter to Chaffetz demanding he open an investigation into Flynn.

"[W]hat I can confirm, having spoken to him about it, is that those conversations that happened to occur around the time that the United States took action to expel diplomats had nothing whatsoever to do with those sanctions,” Pence told CBS anchor John Dickerson in January.

But after the Washington Post reported last week that ousted acting attorney general Sally Yates informed the Trump administration about the contents of the conversation back in January, Flynn said that he could not recall whether he’d discussed the sanctions before Trump took office.

Following Flynn's resignation, several GOP members of the Senate have pressed for a fuller investigation into the administration's relations with Russia, but House Republicans refuse to follow suit.

House Intelligence Committee Chairman, Rep. Devin Nunes of California, who had backed Flynn earlier Monday, lamented in a statement on Tuesday that Washington can be a "rough town for honorable people." Nunes, who served on Trump's transition team, told CNN that his committee has no plans to probe Flynn's communications with Russia or who in the White House knew, citing the likelihood that Trump will invoke executive privilege. Instead, he told Fox News, he is more concerned that an American citizen had his phone calls recorded.

Nunes appeared to be echoing the president's top concern surrounding the scandal, as demonstrated in a tweet Tuesday morning:

"I expect for the FBI to tell me what is going on, and they better have a good answer," Nunes told the Washington Post, in line with Trump’s response to Flynn’s resignation. "The big problem I see here is that you have an American citizen who had his phone calls recorded."

New York Republican Rep. Chris Collins, another top Trump surrogate in the House who served on the administration's transition team, told reporters Monday, “I think some people are trying to blow this up, you know, make a mountain out of a mole hill.” Collins went on to say that “there’s nothing wrong with the national security adviser-elect, so to speak, speaking with world leaders.”

CNN anchor @ChrisCuomo to GOP congressman: There is "zero chance" journalists will "move on" from the Flynn scandal https://t.co/b3HADXcG4O pic.twitter.com/0rM5emR5KB

While House Republicans refuse to conduct any discernible oversight of the Trump administration, Republicans in the Senate are already using their apparent willingness to investigate Flynn's ties to Russia as a tool to pressure Democrats in the chamber to confirm the remainder of Trump's Cabinet.

Sen. Marco Rubio, R-Florida, told reporters that Flynn’s contact with the Russian ambassador will be a part of the ongoing bipartisan investigation into alleged Russian interference into the 2016 election.

“This and anything else that involves the Russians,” Rubio said Monday. “We’re going to go wherever the truth leads us.”

Another Republican member of the Senate Intelligence Committee, Missouri Sen. Roy Blunt, said Tuesday, "that we should look into it exhaustively so that at the end of this process, nobody wonders whether there was a stone left unturned, and shouldn't reach conclusions before you have the information that you need to have to make those conclusions."

Despite the rumblings of more hawkish Senate Republicans like Rubio and Sens. John McCain, Ariz., and Lindsey Graham, SC., chairman of the Senate Intelligence Committee Chairman North Carolina Republican Richard Burr said shortly before Flynn resigned, “What’s important is if the president has confidence in the National Security Adviser.”

Similarly, Wisconsin Republican Ron Johnson, chairman of the Homeland Security and Governmental Affairs, said Monday night that he's willing to leave it to the Trump White House to get to the bottom of the Flynn matter.

Meanwhile, Senate Majority Leader Mitch McConnell leader has remained completely silent on the matter, choosing instead to chastise Democrats for moving slowing on the confirmation of Trump’s cabinet nominees in his floor remarks Monday.