It's called "Trump's House of Pleasure." We remind you that it's fiction 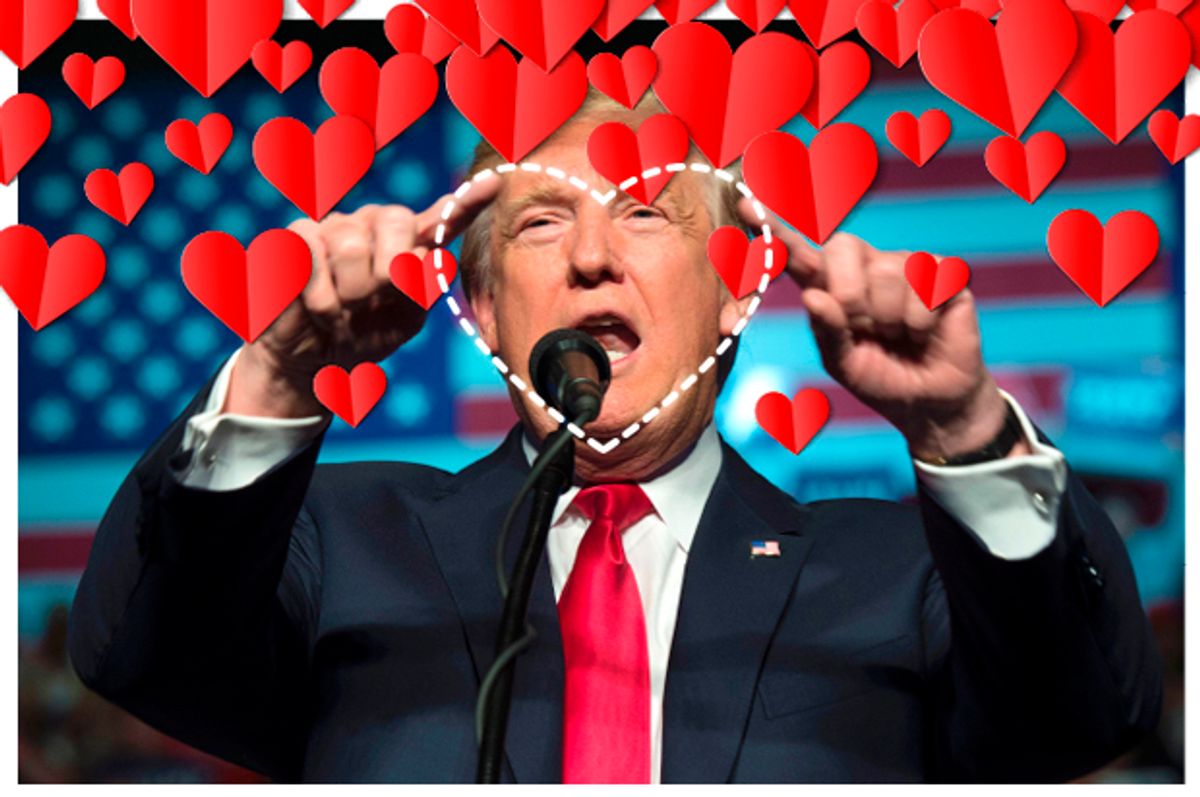 On most weekdays, President Donald Trump likely spends his nights with his one true love: a television tuned to cable news. But this is Valentine's Day — a night when Trump's romantic side comes through and he gets to show Melania the depths of his love.

And she returns the favor.

But maybe there's a sexuality hidden deep beneath the orange skin, the too-long tie, the look of genuine confusion when people are talking for more than a minute. That's what Luxy, a dating app describing itself as "the No. 1 dating app for the wealthy and powerful," suggests in its forthcoming novella "Trump's House of Pleasure," a work of presidential fan fiction that imagines a life where women want to see the president naked and have extramarital relations with him.

Luxy says the story will portray Trump living in a White House where his reasonably sized hands are all over more than just his many wonderful, super-smart executive orders and his bathrobe is nearly always open and ready for action.

Trump, red faced, disheveled and wrapped tightly in his gold-colored robe, slammed down the phone in the kitchen and immediately grew paranoid that somebody might have heard the whispered pleadings of a desperate man — distraught, heartbroken, inconsolable. Tucked away in the corner of the residence on the second floor of the White House, it was as private as possible at 3 a.m. He had made the effort to cross the West Sitting Hall from the Master Bedroom to find a secure place to finally end his sexual addictions.

Or at least he would gain control of his urges and not act out on his addiction to physical pleasures.

“This is no good. No good,” he muttered to himself. “This’ll make Nixon look like a fucking winged angel. No good.”

Earlier in the week, Trump was overheard on the Truman Balcony using his private cell phone and feeding his voracious appetite for phone sex. He once joked with Bannon that the “Hot Line” will have “a whole new meaning in the Trump White House.”

It was bad enough that he couldn’t tap into his “private collection” of movies back at Trump Tower. Old friends and roommates from his Wharton College days knew The Donald had a penchant for “Exotic Tastes” and used to joke that he turned his dorm into a “Little United Nations.”

“I will not be blackmailed. Not good.”

He was absolutely certain that the veteran Secret Service agent that ran the second floor residence was responsible for the letter placed on his pillow that morning before his morning briefing: “Resign the Presidency or I WILL go public with what I’ve seen and heard. This will not end well.”

Intrigue surrounding Trump's love life isn't new, as fan fiction and erotica have been tied to the Donald before. Early last year, a 22-year-old published "Trump Temptations: The Billionaire & the Bellboy," which Salon described at the time as a "10-page, simile-laden erotica novel co-starring a fictionalized (and sexualized) Donald Trump."

To quote the author of that piece: "You paid real actual money for this shit. You need to reevaluate your life."

"Trump's House of Pleasure" — the first in a series of celebrity fan fiction — is available for pre-order on March 1.