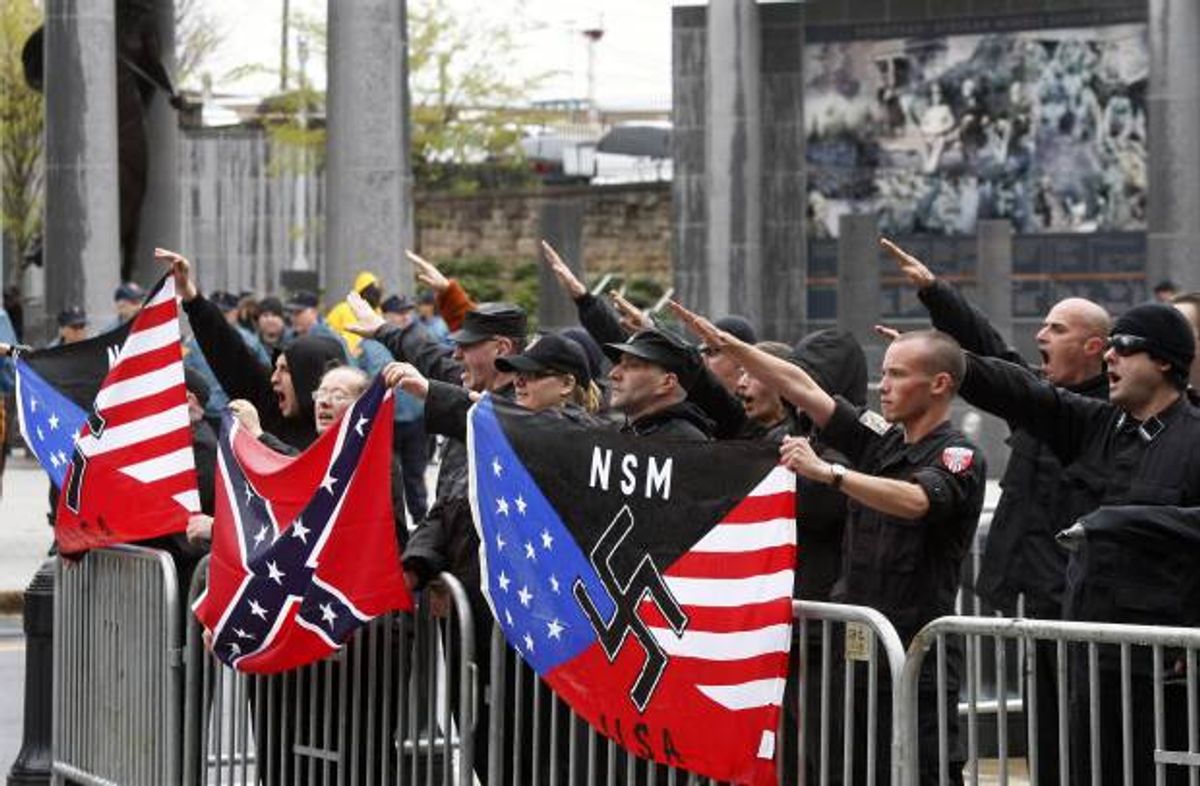 Neo-Nazi writers are upset that retired Lt. Gen. Michael Flynn has resigned from his position as national security adviser. The anti-Semites are lionizing Flynn as “one of our best guys” and a “true patriot” who has “been quite critical of the Jews in the past.” They are also lamenting that his resignation is “definitely a loss … to the Jews” and are speculating that he was pushed out by “more subversive elements in the White House.”

As CNN noted, Flynn resigned on the night of Feb. 13 “after reports surfaced that the Justice Department warned the Trump administration last month that Flynn misled administration officials regarding his communications with the Russian ambassador to the United States and was potentially vulnerable to blackmail by the Russians.”

The disgraced former national security adviser has repeatedly pushed toxic views. Last July, Flynn shared a tweet that read in part, "Not anymore, Jews. Not Anymore." (He later apologized.) He claimed on Twitter that “Fear of Muslims is RATIONAL.” Flynn also endorsed the work of racist author Mike Cernovich, who has frequently pushed white nationalist themes on his Twitter account (many of which he later deleted). Cernovich has claimed that “diversity is code for white genocide,” “Blacks use guns for murder. Whites use guns to kill themselves,” and “Diversity is bad for national security.”

Members of the white nationalist movement unsurprisingly applauded Flynn’s appointment to national security adviser. They are now mourning the loss of “one of our best guys.”

Daily Stormer: Flynn “Is One Of Our Best Guys. …  This Is Definitely A Loss.”

The Daily Stormer is a neo-Nazi website that worships Adolf Hitler, posts defenses of the Holocaust, and attacks Jewish people as “kikes.” Editor Andrew Anglin wrote that Flynn’s resignation “is dumb. Team Trump shouldn’t give these people an inch. Flynn is one of our best guys. And he did nothing wrong.” He added:

This is giving a victory to the kike media.

I actually didn’t think the block on the travel ban was a loss. I think that was all part of the plan to get the public stirred up against activist judges, to get ready for the Supreme Court to rule on an even more hardcore version of the Moslem ban.

This is definitely a loss.

He posted another piece stating that Flynn was under “vile Jew attacks” and commenting that accepting Flynn’s resignation “sends the wrong message to Russia, and more importantly, it sends the wrong message to the people -- that we are going to respond to bullying. I trust Trump, however, and I do have faith that there must have been very good reason for this decision.”

Infostormer: Flynn Is “A True Patriot” Who Has “Been Quite Critical Of The Jews In The Past.”

Infostormer is a neo-Nazi website that praises Hitler and states that it is “destroying Jewish tyranny.” Writer “Marcus Cicero” responded to Flynn’s resignation by calling him “a true patriot who loves his country, has over thirty years of service to back the first point up, and has offered nothing but loyalty to Trump since day one. He has also been quite critical of the Jews in the past.” The writer concluded:

My personal guess is that this attack on Flynn was pushed internally by more subversive elements in the White House that may or may not include Jared Kushner and Rence (sic) Priebus, who have seemingly attempted to railroad President Trump at times on his more hardcore measures.

But this is just total speculation at the moment, and I don’t want to get too hasty in making assumptions.

All I know is that the Jews are loving this whole spectacle, and are acting like sharks in blood-tinged water.

We’re going to be keeping a much closer eye on the White House factional struggles in the coming days and weeks, because if my senses are correct, Secretary of State Rex Tillerson will likely be the next man attacked for his ties to Russia and Vladimir Putin.

The lead-up to the demise of General Flynn was somewhat ignored by us due to the sheer level of nonsense that has been pushed forth by the Lugenpresse lately, but we won’t make that mistake again.

The Jews are not going to get away with another bullying attack on our regime – they will be called out, and they will be defeated if and when they try again.

Richard Spencer: Flynn “Did Nothing Wrong” And Is A Victim Of “The Deep State.”

Richard Spencer is a neo-Nazi who, as the Southern Poverty Law Center notes, “advocates for an Aryan homeland for the supposedly dispossessed white race and calls for ‘peaceful ethnic cleansing’ to halt the ‘deconstruction’ of European culture.” He wrote on his AltRight.com website that Flynn “did nothing illegal; in my estimation, he did nothing wrong.” He concluded that “this scandal reveals that Trump lacks the allegiance, not just of the mass media, but of the Deep State, that is, the unelected bureaucratic and legal apparatus of the government. People within the Deep State leaked the information on Flynn’s phone call, and they will attempt to undermine Trump at every turn.”

UPDATE: White supremacist radio host and former KKK head David Duke is also blaming Jewish people for Flynn’s downfall. He tweeted: “Trump can’t let these Jews lynch General Flynn,” which linked to an unbylined piece on his website claiming that a Jewish conspiracy brought down Trump's former national security adviser. He also tweeted: “(((They))) weren't going to stop - Jewish Supremacy is out in the open like never before...”