The Indivisible movement is fueling resistance to Trump 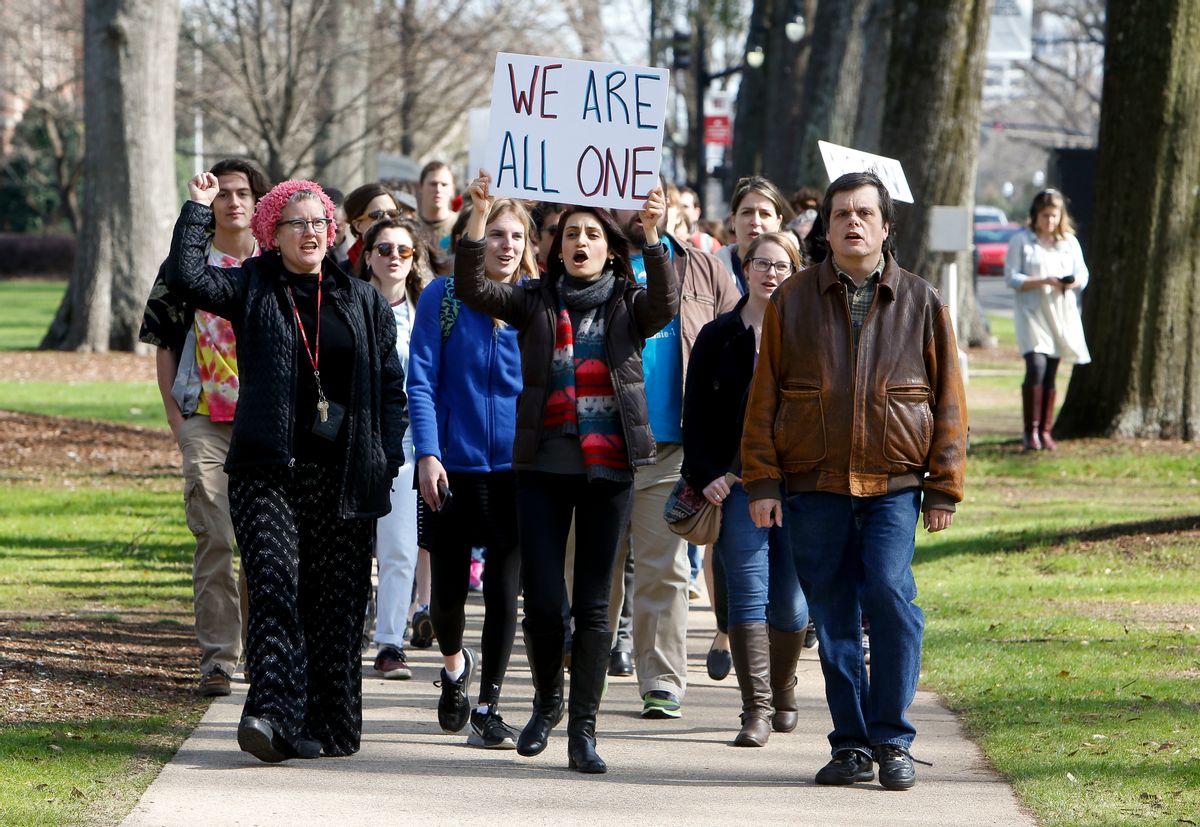 After the 26-page Indivisible Guide was put online as a Google doc in mid-December, it quickly went viral — former US Labor Secretary Robert Reich and actor/activist George Takei tweeted it — and Google’s servers kept crashing, rendering it virtually useless.

Created by a group of former congressional staffers, the guide, now a website, provides specific tactics for fighting against President Donald Trump’s agenda by taking a page from the tea party’s playbook. So far, over 6,000 local groups have registered at IndivisibleGuide.com, agreeing “to resist Trump’s agenda, focus on local, defensive congressional advocacy and embrace progressive values.” The guide has been downloaded over a million times and the site has already had over 10 million page views.

“After the election of Donald Trump, we saw an uptick in the number of Facebook groups and online activists who were very well-meaning but were giving very bad advice,” said Sarah Dohl, a co-author of the Indivisible Guide.

People were being urged to do things like call House Speaker Paul Ryan (R-WI) or to sign an online petition. As former congressional staffers, Dohl and her Indivisible colleagues knew that unless you “live in the 1st District of Wisconsin, Paul Ryan doesn’t work for you, and he does not care what you have to say,” she said.

These ex-staffers witnessed firsthand how the tea party rose to power and convinced their own members of Congress to reject President Obama’s agenda. “We did not realize that that agenda would be thrown off track very quickly by groups of local activists who later became known as tea party patriots,” Dohl said.

Dohl, a former staffer for Rep. Lloyd Doggett (D-TX), recalls the August recess in 2009, the summer after President Obama was elected. “That’s a time when members of Congress go home and they host a lot of ribbon cuttings and pancake breakfasts and visits with little league teams,” she said.

It was supposed to be an easy break, but it turned out to be everything but. “The tea party was ready and they disrupted almost every event that summer talking about health care and screaming their chant of ‘Just say no.’”

Doggett’s office was deluged with calls from tea party-aligned voters who tied up phone lines with complaints, making it difficult for staffers to work on anything else.

Calling your own members of Congress is one of the key strategies laid out in the Indivisible Guide. It helpfully reminds us that their primary concern is getting re-elected. From the guide, “MoCs want their constituents to think well of them and they want good local press. They hate surprises, wasted time and most of all, bad press that makes them look weak, unlikable and vulnerable.”

The guide was exactly what Erin Hussein was looking for after Trump’s surprising victory. “I thought ‘there’s got to be a tea party on my side,’ she said. At first Hussein couldn’t find anything that spoke to her but kept at it. “I just kept googling ‘Democratic, tea party’ until eventually the Indivisible Guide popped up in one of my searches.”

Hussein, who lives in New York City, witnessed the tea party’s rise through the eyes of her parents. Upset by Barack Obama’s presidential victory, they were early followers of the tea party movement, driving down to Washington, DC in 2009 to protest his presidency on the National Mall.

After Hussein found the Indivisible Guide online, she said she thought, “This is exactly what I’m looking for. These are people that watched the tea party rise up and they thought about why it works.” Now, this corporate lawyer and stay-at-home mom is a co-founder of NYC Indivisible, which held its first meeting in late January. About 100 people showed up, Hussein said.

At the meeting, Hussein asked people to raise their hands if they knew who their congressperson was. “Only about half knew the name of their congressperson or their district.” New York City has five boroughs and 11 congressional districts, so part of what Hussein is working on now is “an education game.” She is planning for Congress’ upcoming recess, which begins Feb. 20, and expects to have a calendar of events up soon.

There are Indivisible groups in Arizona and Missouri — and many more are sprouting up all around the country. They are planning actions, showing up at their local representatives’ offices to voice complaints, demanding meetings and calling Congress. On Tuesday, members of Indivisible Missouri, showed up at the Kansas City office of Sen. Roy Blunt (R-MO), demanding to meet with him and voice their concerns.

On Thursday night, members of Utah Indivisible and others confronted House Oversight Committee Chairman Jason Chaffetz (R-UT) at a town hall meeting in Cottonwood Heights, a Salt Lake City suburb. Over 1,000 people packed the meeting, according to New Yorkmagazine, to “question the congressman on his failure to investigate the president, his support for Trump’s controversial executive orders and his efforts to repeal the Obama order establishing Bears Ears National Monument in southern Utah.”

This kind of local activism is exactly what Indivisible hopes will continue. Beyond “demystifying Congress,” their goal is to support local groups that are “putting the Indivisible Guide into action.”

With a 70-member team of volunteers, Indivisible, which recently registered as a nonprofit, has been offering joint public information calls with other activist groups, such as MoveOn.org. Some 60,000 people called in to get advice on how to best organize locally. On Thursday, Indivisible hosted a video call with Organizing for Action, on how to make the most of the upcoming congressional recess.

The cost of conference calls is one of the reasons Indivisible has started accepting donations from individuals on their website, Dohl said. She denied rumors by conservatives that the group is being funded by George Soros, adding that Indivisible would be “honored” to be contacted by someone like him.

“We don’t think that we’re the leaders in this movement,” Dohl said. “We really think it’s the folks on the ground who are meeting in living rooms and auditoriums and libraries across the country, and really getting out and hitting the pavement to visit their members of Congress’ office.”