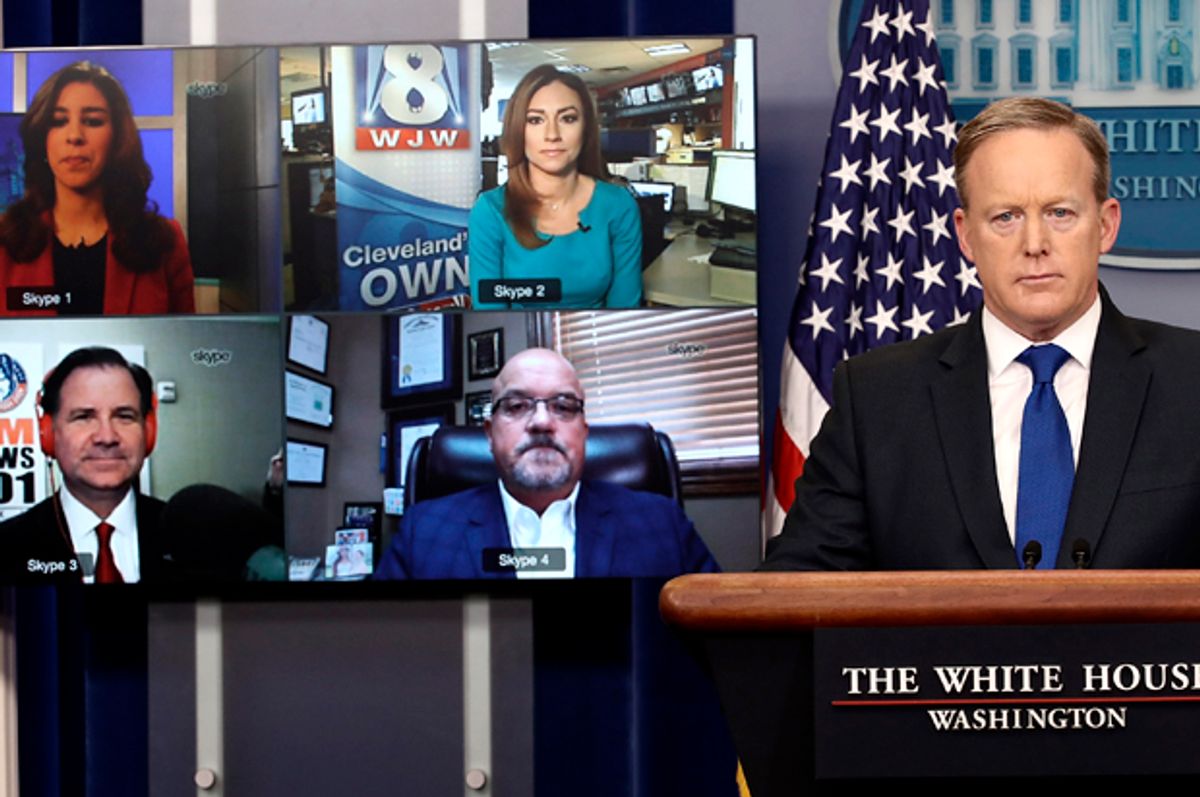 Let us be generous and give Donald Trump's administration credit for one not-terrible idea. The Monday after the inauguration, press secretary Sean Spicer announced the creation of “Skype seats” for his daily briefings. Every day, four reporters from outside Washington would use the video application Skype to virtually attend the briefings and ask Spicer questions.

In theory, this is a good idea. For smaller papers or blogs or local TV stations without the budget to travel to Washington or permanently base a correspondent there, it would provide an opportunity to ask questions about local issues that the White House would not otherwise hear about from national reporters. For a president who claimed during the campaign that he would be the voice of the “forgotten man," this could make for excellent public relations.

The only losers in the scenario might be the regular White House press corps, which would have fewer chances to ask questions at daily briefings. In the eyes of the Trump White House, this was surely a bonus, if not the actual point.

After two weeks, there is enough of a sample size to render a judgment on this experiment in electronic media democracy. That judgment is a resounding “meh.”

Take Tuesday’s briefing. One Skype seat was occupied by a TV newscaster in Nevada with a good question. John Huck, an anchor for the Fox affiliate in Las Vegas, asked Spicer what guarantees he could make that the administration’s rollback of financial regulations would not lead to banks' repeating the risky behavior that blew up the world’s economy in 2008. Huck framed the question around the impact on Vegas, but it could apply to many distressed cities and towns across America.

Then Spicer turned to Jason Stevens, his other Skype guest. Stevens is a professor at Ashland University, a Christian college in rural Ohio. He also runs a website called the Federalist Papers Project, which is not so much a news site as it is a polemic venue, filled with the sort of talking points and insults directed at liberals that have turned right-wing media into a closed ecosystem. Which means it has as much to do with journalism as a bag of hammers. (Media Matters has a rundown of some of the Federalist Papers Project’s better headlines.)

Here is Stevens asking a question rarely heard outside of think tanks and undergraduate poli-sci seminars:

What are the president’s future plans for rolling back the expensive and burdensome regulations of the administrative state, most of which are the product of unelected, unaccountable bureaucrats who never received the consent of the governed to do anything, let alone make law?

This is only a question about policy in the most roundabout sense. More deeply, it is an effort to inject into mainstream discourse, even after it has been rejected for decades, demagoguery about right-wing bogeymen like “unaccountable bureaucrats” who make their own laws.

This has roughly been the story at most of Spicer's press briefings so far. For every solid local question about, say, the administration’s Cuba policy (asked by a Florida reporter), there is a question asked by a right-wing talk-radio host from Alabama about why Trump has not yet ended the Deferred Action for Parents of Americans and Deferred Action for Childhood Arrivals immigration programs two weeks into his presidency. That such large programs cannot be unilaterally ended by the president alone is beside the point so long as there are still dark-skinned immigrants who are illegally in the country.

One problem here is that the White House has opened up the applications for Skype seats to any self-described media organization that claims even a remote connection to politics. Which means it has dragooned directly into the daily press briefing its share of backwater talk-radio hosts and hyper-partisan right-wing bloggers with tiny readerships.

On top of that, the press office has cozied up to conspiracy theorists like Alex Jones and his Infowars site. It has also granted credentials to fringe sites like the Gateway Pundit, which traffics in the worst sorts of fearmongering and racist stereotypes about African-Americans and Muslims. That site’s founder, Jim Hoft, has long been known as the "stupidest man on the internet" due to his habit of falling for hoaxes and falling short with basic fact-checking, when he bothers with it at all. Now he will have a correspondent at the daily White House press briefing.

None of this comes as a total surprise, of course. After all, Trump’s campaign was run by the proprietor of a racist website described (by him) as the “platform of the alt-right.” This is the polite term for the collection of nativists, ultra-nationalists and neo-Nazis, whose rise became a big story in the 2016 campaign.

While the right-wingers who have earned Skype seats at daily briefings would perhaps object to being lumped in with that crowd, there is no doubt their views have found a friendly home within the current administration. Granting these people legitimacy is one of the sillier and less significant crimes this White House has already committed against our democracy. But it fits into a larger and more disturbing tapestry.