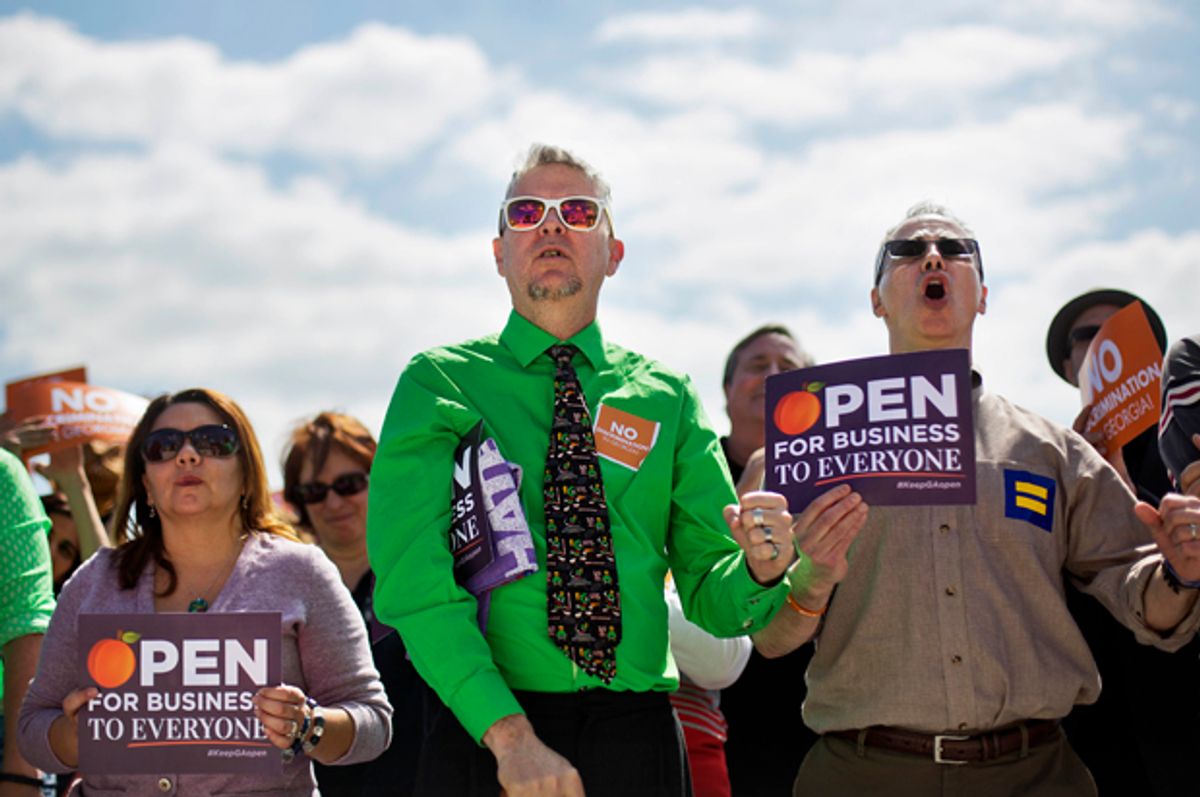 Protesters at a rally against a contentious "religious freedom" bill, Tuesday, March 17, 2015, in Atlanta. (AP/David Goldman)
--

Everything is bigger in Texas, even the homophobia. Last week, Lone Star lawmakers filed Senate Bill 651, which critics warn is one of the most dangerous and extreme of the so-called “religious liberty” bills debated by state legislatures in recent years.

The legislation, which was co-sponsored by Republicans Charles Perry, Brian Birdwell and Bryan Hughes, would allow private individuals employed in more than 65 licensed occupations to deny services to people based on their “sincerely held religious belief.” Were a therapist, for instance, to refuse to see a gay client because of his sexual orientation, SB 651 would prevent the state from taking action against the practice. The bill, which its authors note would apply to “one-third of the members of the House of Representatives” and “one-half of the members of the Senate,” would permit broad discrimination against members of the LGBT community.

Jennifer Pizer, the Law and Policy Director for Lambda Legal, claimed that the bill is “breathtaking” in its virtually unlimited scope.

“If the medical standard of care would require a particular treatment and the licensed health professional — the doctor, the nursing staff or other health professionals — had a religious objection to the required standard of care, they could withhold the care the patient needs,” Pizer said. “The obvious example is a doctor who has a religious objection to blood transfusion. But the bill could include everything from medical and legal professionals to people who provide certain types of financial advice and accounting services.”

Under SB 651, teachers wouldn’t have to intervene in cases of bullying or discrimination if they see an LGBT student being harassed in school, as Pizer explained. A realtor could refuse to help a lesbian couple look for a home for their family. An EMT could deny life-saving care to a transgender person dying on the side of the road.

Such hypotheticals are often viewed as worst-case scenarios that don’t actually happen when policies are enacted, but unfortunately, there have been multiple instances of neglect and abuse in the past. In 1995, paramedics refused to help Tyra Hunter, a 24-year-old transgender woman, after she was fatally wounded in a car crash. After noticing that her genitalia didn’t match her outward appearance, the medics called to the scene ridiculed Hunter even as she died. In a 2010 survey conducted by the National Center for Transgender Equality, 19 percent of respondents claimed they had been denied healthcare because of their trans status.

Along with allowing these kinds of service refusals, advocates warn that SB 651 could prevent the state from taking action against mental health providers that offer conversion therapy. Eunice Hyon Min Rho, who works as the Advocacy and Policy Counsel for the American Civil Liberties Union, told the Texas Observer that the bill could serve as a “pre-emptive strike" against attempts to outlaw “pray the gay away” clinics from operating in the state.

Although a 2015 proposal would have made conversion therapy, a discredited practice that seeks to “change” the orientation or gender identity of LGBT youth, effectively illegal in Texas, the state has recently moved in the opposite direction. As Salon previously reported, a bill filed last December would pave the way for conversion therapy in Texas by allowing faith-based communities to take the burden off state adoption agencies by “[identifying] foster and adoptive families for children.” The legislation is being pushed by Lieutenant Governor Dan Patrick, a Trump supporter who blamed the LGBT victims of the Pulse massacre for being murdered.

David Pickup, a therapist who offers conversion therapy at his practice, called SB 651 “a good step in the right direction.”

In addition to creating a mental health crisis among vulnerable youth, Chuck Smith, the CEO of Equality Texas, claimed that the legislation attempts to address a problem that the state doesn’t have. A Religious Freedom Restoration Act passed by Texas in 1999 already stipulates that local and state governments “may not substantially burden a person’s free exercise of religion.”

He said that SB 651 is an affront to that bill’s intent.

These sorts of bills offer a very narrow view of whose faith deserves to be protected by state law. In 2015, the state signed into law the “Pastor Protection Act,” which allowed clergy to refuse to perform same-sex marriages. That legislation was designed to shield the religious beliefs of conservative Christians — not, say, Muslims or Buddhists.

Calling SB 651 an example of legislating “Christian supremacy” in the name of religious freedom, Angela Peoples, the Director of GetEqual, claimed there’s a reason that this bill is even more outlandish than those proposed in years past (and given that it’s Texas, that’s saying something). Peoples believes that the legislation is part of a “multi-year strategy” by state Republicans to continue “shifting the goalposts” so bills once considered drastic and fanatical now appear reasonable by comparison.

“If you have a bill that comes forward that makes people say, ‘This is crossing the line,’ then you move the line,” she said. “You create a bill that’s even more extreme, so that the other legislation that came out the year before seems like a compromise.”

Peoples argued that bills like SB 651 — because they would be so harmful if enacted — are designed to get attention in order to pave the way so that comparatively moderate legislation can slip through under the radar. Even though the legislature has only been in session for a month and a half, the state of Texas has already introduced nine anti-LGBT bills to be debated this year. One of those pieces of legislation is strikingly similar to North Carolina’s controversial House Bill 2: It would prohibit transgender people from using the public bathroom that corresponds with their gender identity.

That bill, which would cost Texas an estimated $8.5 billion a year in lost revenue if passed, was recently criticized by the NFL — who said that enacting the law would jeopardize the state’s ability to host future Super Bowls. But next to SB 651, maybe that legislation doesn’t seem all that bad to you. It’s terrifying to think what could become “acceptable” in Trumpland.