As thousands become citizens in Los Angeles, some talk Trump

Despite rhetoric from the president, they're proud to call themselves Americans now 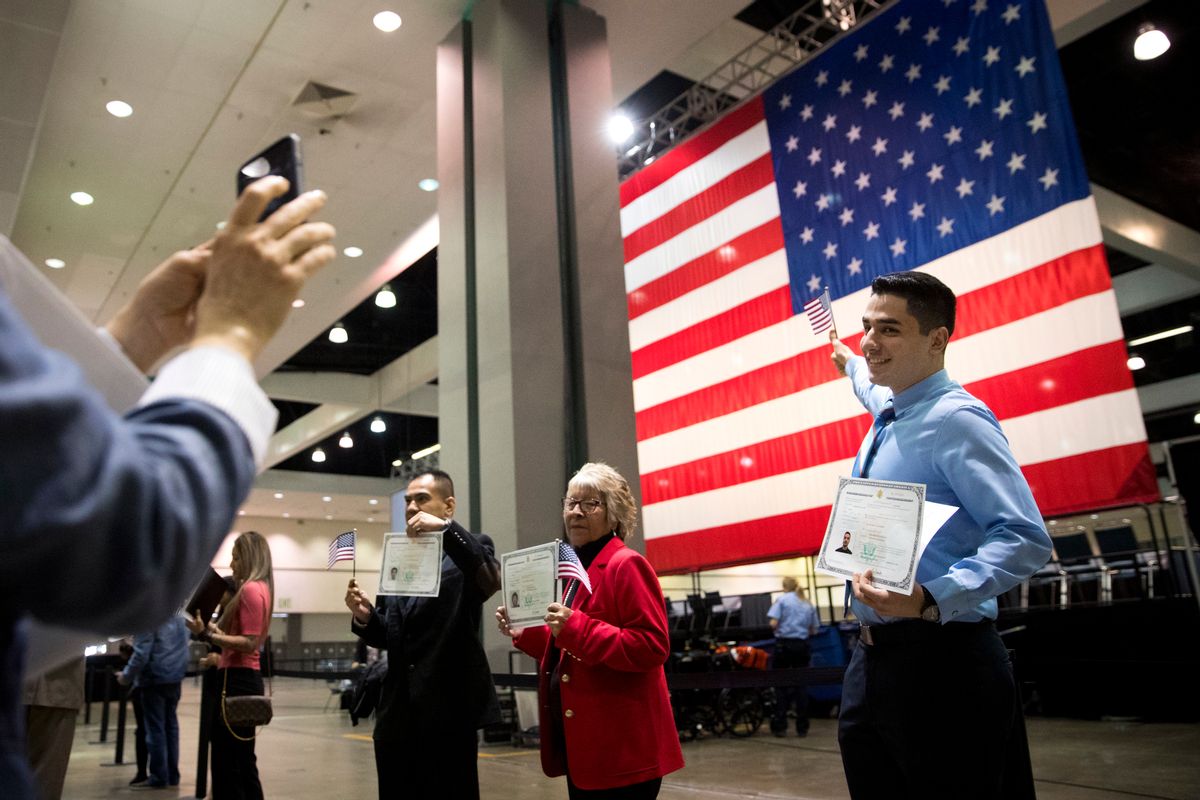 Erik Danialian, a 21-year-old immigrant from Iran, poses with his U.S citizenship certificate in front of a large U.S. flag after a naturalization ceremony at the Los Angeles Convention Center, Wednesday, Feb. 15, 2017, in Los Angeles. About 3,000 people took the oath in the morning and more than 3,500 others were expected during an afternoon ceremony, according to U.S. Citizenship and Immigration Services officials. (AP Photo/Jae C. Hong) (AP)
--

LOS ANGELES — Some wiping tears from their eyes, thousands of people became U.S. citizens Wednesday during a Los Angeles ceremony where President Donald Trump wasn't far from many of the immigrants' thoughts.

Shortly after posing in front of a massive American flag, 21-year-old Iranian immigrant Erik Danialian said he was relieved to become a U.S. citizen in the wake of Trump's ban on travelers from seven predominantly Muslim nations, including Iran.

"I feel safer," said Danialian, whose mother and sister also became citizens during the ceremony. "I hope whoever deserves it gets a fair chance to come to America."

Sofian Haikal of Syria said he also felt relieved to become a citizen after living in Los Angeles for four years, though he's worried his parents won't get permission to come the U.S. to meet their 3-month-old grandson.

"We are suffering from terrorism and there are bad people in our own country, and we wouldn't like to be considered one of them," said Haikal, a 36-year-old financial adviser. "There are a lot of good people over there that can participate in the growth of this country."

Haikal said he felt proud to become an American.

"It's one of the best countries in the world," he said. "I like to be a citizen of a country that has lots of freedom, democracy and equal rights."

Gevorg Ishkhanyan, an Armenian who became a U.S. citizen with his wife at the ceremony, said he supports the travel ban and Trump.

"Too many people want to live here," said the 39-year-old. "There are countries that have dangerous people."

His wife chimed in with a different opinion.

"Being an immigrant and saying there are too many people, it's kind of unfair to other immigrants," said Ana Ishkhanyan. "It's unfair that people are being judged by other people from their countries."

She said she can't imagine living anywhere but the U.S. after living in Los Angeles for five years. "It feels like home," she said.

They represent 140 countries, with the highest numbers from Mexico, Philippines, China, El Salvador, Guatemala and Iran.

Citizens From The Wires Immigration Iran