Can Jeff Sessions be trusted to investigate Flynn, Trump and the Russians? The answer should be obvious

Trump's attorney general was a central figure in the presidential campaign. He can't pretend to be impartial 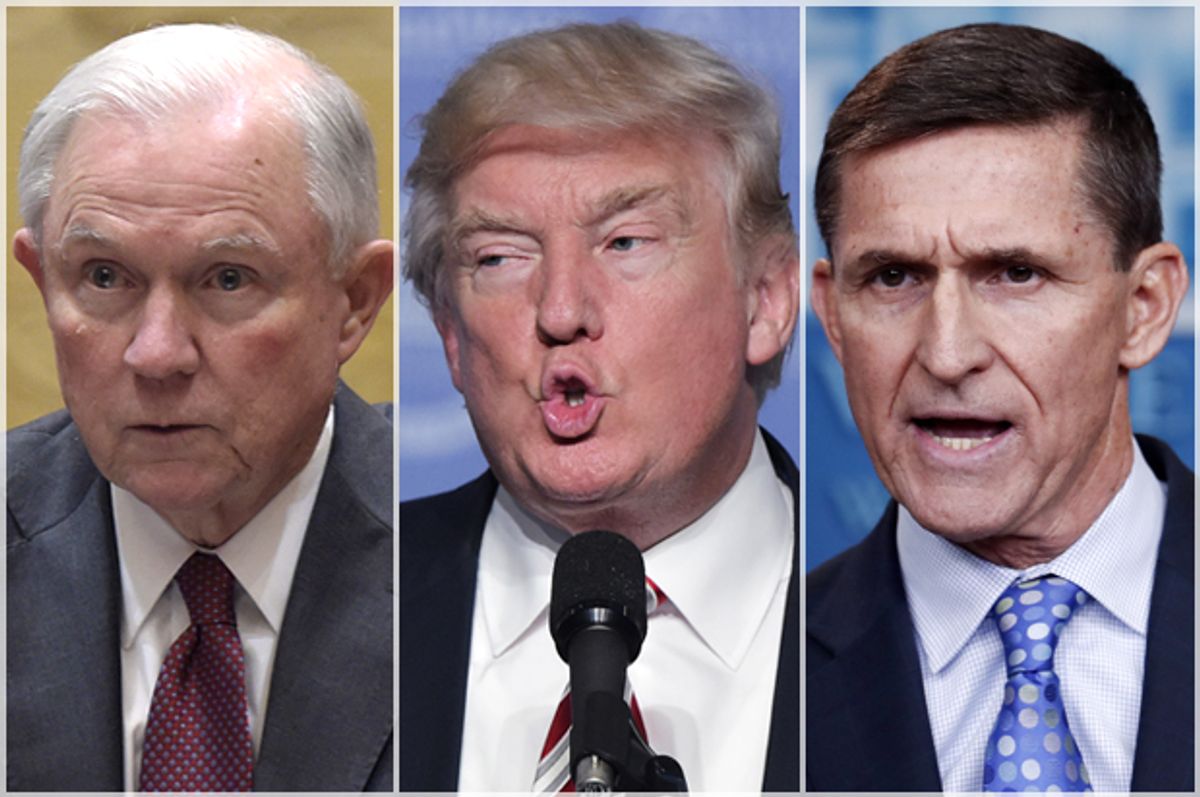 Remember the final debate of the presidential campaign? That was when Donald Trump looked right at Hillary Clinton and growled, "If I win, I am going to instruct my attorney general to get a special prosecutor to look into your situation because there has never been so many lies, so much deception." If he were president, he told her, “you’d be in jail.” Well, the worm has turned.

Trump may be president now, but one month into his presidency there are already calls for a special prosecutor and an independent bipartisan commission to investigate his ties to the Russian government and its involvement in the election. All this comes, of course, in the wake of the resignation of Trump's national security adviser, Michael Flynn. There is also growing consternation over new Attorney General Jeff Sessions' involvement in any investigation. Considering that he was heavily involved in Trump's campaign — which would presumably be a central subject of that investigation — it is totally inappropriate for him to oversee the case.

Senate Minority Leader Chuck Schumer issued a statement on Wednesday demanding that Sessions recuse himself from the investigation.

[Flynn's] resignation raises more questions than it answers and the American people deserve the truth. . . . I believe that Attorney General Sessions has no choice but to recuse himself, and then he should and must put an independent investigative authority in charge.

And as MSNBC's Chris Hayes tweeted on Wednesday:

It's worth briefly revisiting the Loretta Lynch "tarmac meeting" to get a little perspective. Last June the then-attorney general and former President Bill Clinton had a chance 30-minute meeting at the Phoenix airport. This was seen by the Republicans as obvious proof that Lynch was colluding with the campaign to let Hillary Clinton off the hook for having kept a private email server when she was secretary of state. Lynch quickly recused herself from the case, saying she would accept the recommendation of the prosecutors. James Comey, the FBI director, subsequently announced there was no evidence of criminal wrongdoing in the email case, and that should have been that.

But that's not what happened, as we know. Just three days before the election, former New York mayor and top Trump surrogate Rudy Giuliani wrote this:

Attorney General Lynch and former President Clinton met on the Phoenix, Arizona tarmac days before Secretary Clinton was to be interviewed by the FBI for possible criminal activity. It has been reported that her staff ordered witnesses not to take pictures and no one was present during their 39-minute conversation. General Lynch never recused herself from decisions on the Clinton investigation after her self-admitted “mistake,” as it has also been reported that she continues to deny the FBI the authority to convene a Grand Jury, which is necessary for any meaningful investigation.

Yes, the Trump forces tried to insist on a grand jury to investigate that single meeting. Today we have an attorney general who was knee-deep in the presidential campaign that now is (or soon will be) under investigation. Sessions stumped for Trump all over the country, gave a nomination speech at the Republican convention and was touted as "the clearinghouse for policy and philosophy” for the Trump administration.

Most importantly, Sessions was the chairman of Trump's national security advisory committee during the campaign. When he was named to that position in March, Sessions said, "I am grateful for the opportunity to recommend and facilitate discussions among exceptional and experienced American military and diplomatic leaders to share insight and advice with Donald Trump, regardless of their political views." Does it seem appropriate for someone in that post to be in charge of the investigation of the Trump campaign's suspected connections to the Russian government?

At this moment there's no evidence that Sessions was involved with or aware of the Russian contacts during the campaign, but there were certainly many more opportunities for him to hear about them than, say, during a one half-hour chat on a tarmac.

Sen. Dianne Feinstein, D-Calif., asked Sessions if he planned to recuse himself from any investigation pertaining to Flynn's communications. He replied, "I am not aware of a basis to recuse myself from such matters," but promised to consult the Justice Department's ethics officials if he felt his "impartiality might reasonably be questioned."

One issue here is that the Justice Department regulation requiring employees to recuse themselves if they have a personal or political relationship with anyone “substantially involved” in an investigation applies only to criminal cases. It appears Michael Flynn will not be charged with any criminal wrongdoing. After the Republican and Democratic leaders of the Senate Judiciary Committee asked the Justice Department to hand over documents and briefings on Flynn's resignation on Wednesday, the FBI precipitously announced that Flynn would face no criminal charges. That serendipitously lets Sessions off the hook, at least in that regard.

Whether the attorney general's "impartiality might reasonably be questioned" is quite another matter, to be sure. Over the years Sessions has proved himself to be a ruthless partisan player when it comes to special prosecutors. He is full of praise for them when it suits his purpose and disdainful when they are not. Think Progress turned up one memorably ironic example from 1999, when Sessions defended independent counsel Kenneth Starr's successor Robert Ray by saying:

[T]o say it is like Russia, I don’t appreciate that one bit. What is like Russia is when leaders lie, cheat, steal, and maintain their office. That is what happens in a country such as Russia, not in a free democracy where all Americans are equal and have a right to know that every other public official is equal and subject to the law just as they are.

Considering that we are already looking at a major scandal in which the president is accused of lying, cheating and potentially stealing, it appears that President Trump has put Sessions in a tough spot. But as Jonathan Schwarz pointed out for the Intercept, Trump can very easily put his Republican defenders out of their misery and end the scandal immediately if he really wants to: He could declassify the government intercepts of communications between Russian nationals and anyone connected to his campaign.

Unfortunately, this is a president who has refused to release his tax returns, as all his recent predecessors have done, so transparency and openness obviously won't be hallmarks of the Trump administration. But if the president truly has nothing to hide, he has the means to prove it.