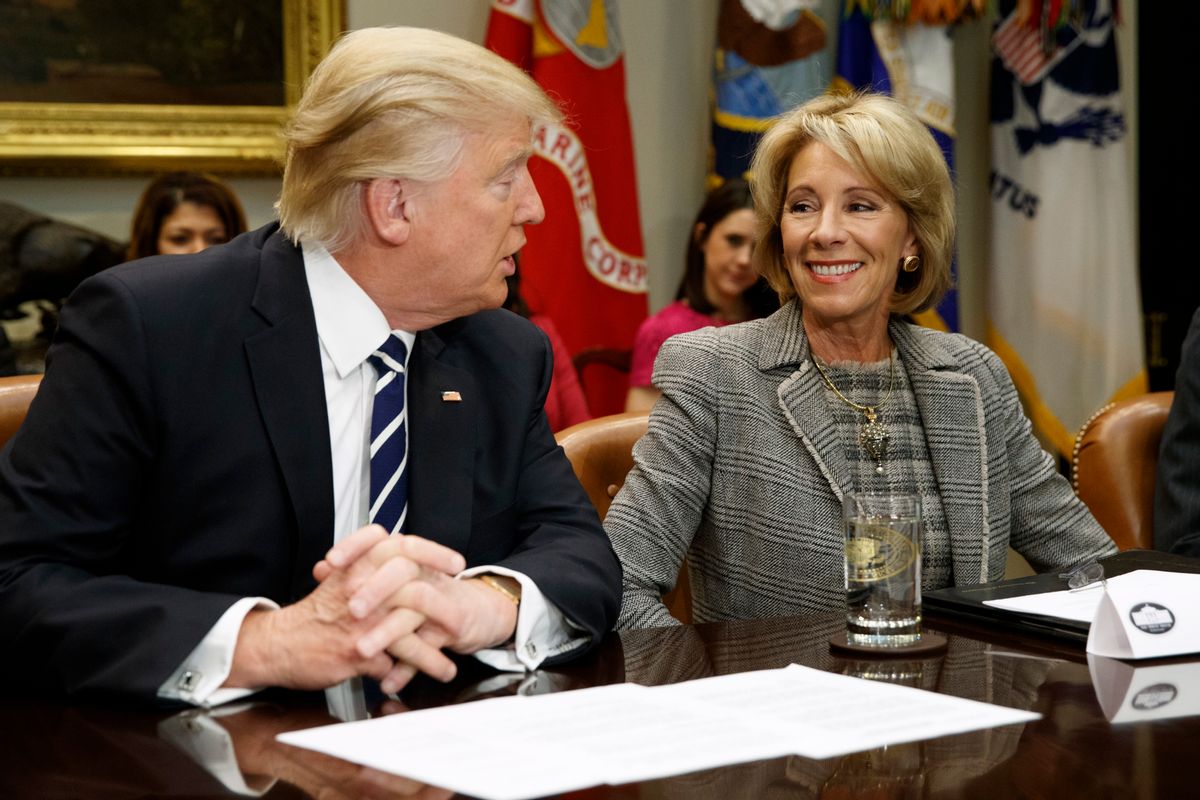 President Donald Trump looks at Education Secretary Betsy DeVos as he speaks during a meeting with parents and teachers, Tuesday, Feb. 14, 2017, in the Roosevelt Room of the White House in Washington. (AP Photo/Evan Vucci) (AP)
--

WASHINGTON — Education Secretary Betsy DeVos on Wednesday pledged support for magnet schools in a bid to repair ties with proponents of public education in the wake of a bruising confirmation battle, but also slammed her critics for rejecting innovation and change.

"There is amble opportunity to really highlight the tremendous successes of so many magnet schools across the country," DeVos told a room full of teachers and advocates. "It's clear that the schools that you represent are doing a tremendous job on behalf of students."

DeVos, a billionaire Republican donor, was been vilified by her critics during the confirmation process as an enemy of public education for her many years of promoting charter and private schools. But she said Wednesday that the type school is less important to her than what the school gives to its students.

"I am really agnostic as to the delivery mechanism as long as we are focused on what a child needs and what is best for each individual child," DeVos said.

DeVos nomination sparked angry protests from teachers and parents around the country. With two Republican senators opposing her, DeVos was confirmed by the slimmest possible margin only after Vice President Mike Pence cast the tie-breaking vote. Two activists sought to block her from visiting a public school in the nation's capital on Friday in a sign of protest.

"The protesters' behavior is a reflection on the way some seek to treat our education system — by keeping kids in and new thinking out," DeVos said. "Friday's incident demonstrates just how hostile some people are to change and to new ideas."

Todd Mann, executive director of the Magnet Schools of America group, told The Associated Press that magnet schools currently receive one-third of the public funding that is available to charter schools. There are more than 4,300 magnet schools in the United States that serve about 3.5 million students. They are free public schools that offer rigorous programs and innovative approaches usually focused on themes such as math, science or the arts. Magnet schools also strive to provide racial and socio-economic diversity.

At the conference Mann urged DeVos to commit to increasing the funding, but DeVos responded with a broad statement of support.

"I think that all great schools should be highlighted and should be supported," DeVos said. "That said, I don't think we should focus necessarily on funding school buildings as much as we should be having conversation around funding students."

Mann later indicated that he was hoping for a different response. "Our position will always be that if money is provided to a public school, it needs to stay at the public school rather than following the student."

Randi Weingarten, president of the American Federation of Teachers, which vehemently opposed DeVos' nomination, stressed that all schools must be held equally accountable. DeVos' critics say that she opposes measures that increase transparency and accountability of charter schools and private school voucher programs.

"We hope Secretary DeVos's visit to the magnet school conference was not simply a photo op but a start on the long road to understanding what it actually takes to provide that enduring ladder of opportunity for all children," Weingarten said in a statement.