Is Michael Flynn the first casualty of a "deep state" coup? It's not unthinkable

Whatever the truth may be about Trump and Russia, the intelligence community is likely using it to undermine him 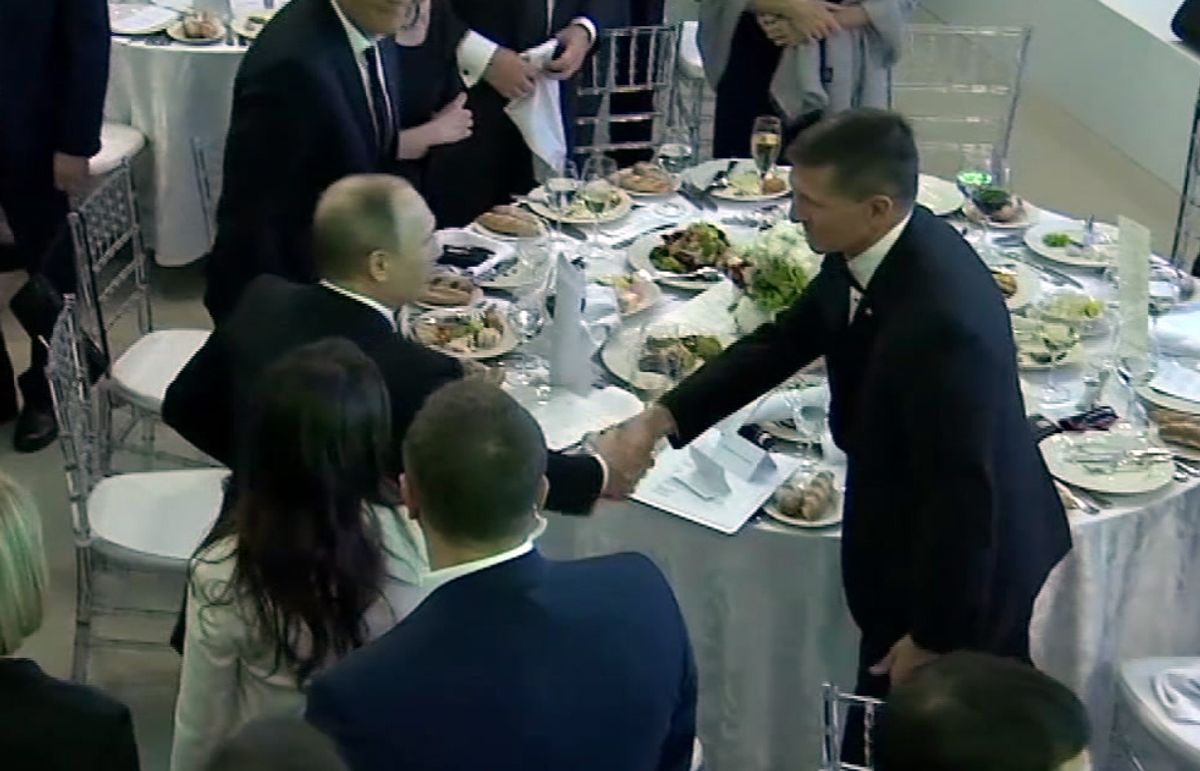 Michael Flynn's resignation as national security adviser — and the murky, widening scandal that it has provoked— has prompted another bout of shivering and shaking in the media about Russian interference in American politics.

Here's a quick recap, if you've been living in a cave: Flynn resigned Monday night after it emerged that he had misled Vice President Mike Pence and other White House officials about the content of his conversations with Sergey Kislyak, Russia's ambassador to the U.S.

The accusation is that Flynn — who was a private citizen at the time — discussed the sanctions placed on Russia by the outgoing Obama administration in response to the alleged hack of Democratic Party emails. Flynn may have urged the Kremlin to show restraint in responding to them.

According to The Washington Post, Flynn “signaled” that the incoming Trump administration would reassess the sanctions a few weeks later if the Kremlin held off on a harsh response. Indeed, the Kremlin did just that. In fact, the Russian government barely reacted at all. Vladimir Putin instead invited the children of U.S. diplomats in Moscow to a Christmas party at the Kremlin (for Orthodox Christians, the holiday falls on Jan. 7) — and Trump tweeted the next day that he “always knew” Putin was “very smart.”

Even if this series of events is true: Flynn urged a cautious response from Russia and suggested that a different approach would be forthcoming from the Trump administration, Putin took that advice and Trump happily tweeted about it the next day, none of that amounts to a scandal of severe proportions. The cover-up, as so often is the case with political scandals, is worse than the crime. If Flynn had not carelessly misled Pence about his conversations with Kislyak, he might not have been forced to resign.

Now talk of an obscure (and never enforced) federal law called the Logan Act is being bandied around by some as grounds for charges being raised against Flynn. The law prohibits U.S. citizens from conducting diplomacy with foreign nations without the consent of the government. Keith Olbermann even dramatically called for Flynn’s immediate arrest. Where were the Logan Act devotees a couple of weeks ago when Sen. John McCain called up the Australian ambassador of his own accord to smooth things over after Trump apparently hung up on the Aussie prime minister during a dispute over refugees?

Flynn’s resignation and the reason for it amount to a huge scandal only if you are willing to believe that Flynn or Trump are patsies for the Kremlin, and that Putin is, in fact, in the White House driver's seat.

If you’re not willing to believe that particular theory without sufficient evidence — first of all, good call. Second, it might be a good time to notice that behind all this there's a potentially much bigger scandal, which is going largely unnoticed in the midst of all the hand-wringing about the all-powerful Putin and his innumerable American puppets.

It’s been clear for months that the U.S. intelligence community opposes even the most benign improvement in relations with Russia. Furthermore, the level of hysteria over Russian influence doesn’t even remotely correspond with the amount or quality of evidence presented to prove the various theories of Russian involvement in the American political system.

It is increasingly plausible that there are powerful forces inside the intelligence community attempting to engineer U.S. foreign policy in a way that would fully reignite the Cold War and thwart any attempt to cooperate with nuclear-armed Russia at even the most basic level.

The Kremlin's response to Flynn's departure was fairly muted. Putin's spokesperson Dmitry Peskov called it an internal U.S. matter and refrained from commenting further. Other officials were more colorful in their language. The general view in Moscow is that anti-Russia hysteria is simply so bad in the U.S. that the intelligence agencies will do anything in their power to prevent Washington from becoming friendlier with the Kremlin. Leonid Slutsky, chair of the foreign relations committee in the Russian State Duma, said the "target" in all this was U.S.-Russia relations. He later commented that recent statements from the White House on the status of Crimea were like a "cold shower" that cooled expectations of a better relationship.

If the "anti-Trump plot" theory sounds more than a bit dubious coming from Moscow, take a listen to former Democratic congressman Dennis Kucinich, who represented the Bernie Sanders left before Sanders did. He makes a reasonable case that Flynn’s departure was essentially the first shot fired in a "deep state" coup against Trump.

"What's at the core of this is an effort by some in the intelligence community to upend any positive relationship between the U.S. and Russia,” Kucinich said on the Fox Business Network. “There are people trying to separate the U.S. and Russia so this military-industrial-intel axis can cash in.”

Trump, Kucinich argued, needs to “get ahold” of his intelligence apparatus — and fast. “This isn't a joke; this is serious. If he doesn't get control of where the information is coming from, he'll never know the truth. The American people will never know the truth and we could be set at war with almost any country,” he said.

Kucinich makes sense. The military industrial complex benefits from actual or potential conflict with Russia. Hyping the Russia threat is a moneymaker for defense contractors. The specter of war with Russia is used by defense officials in both the U.S. and U.K. as a means of arguing for more money to be thrown at the military. Never mind that the 2015 Pentagon budget, for example, was more than nine times higher than Russia’s defense budget in 2015 — and that Putin, while he does control an increasingly strong nuclear power, does not have a death wish for his country.

Kucinich also reminded us of an all-but-forgotten incident in Syria a couple of months ago that conceivably is related to the current mess. During the last months of Obama’s presidency, the White House struck a deal with Russia for an attempted cease-fire in Syria. Lo and behold, a few days later a “mistaken” American strike killed 62 Syrian soldiers and put a prompt end to the deal. The former Ohio congressman summed it up this way:

What happened is, inside the intelligence and the Pentagon, there was a deliberate effort to sabotage an agreement the White House made. This is like deep state, this is like some kind of a spy novel, but it's real and the American people have to understand, a game is being played with the security of our country.

In the latest blow to Trump, a New York Times report on Wednesday included allegations that his presidential campaign had been in contact with “senior Russian intelligence officials” in the year before the election, which “alarmed” intelligence and law enforcement agencies. All officials claiming this spoke to the Times on the condition of anonymity. Reports like this, with no named sources or hard and fast evidence, only lend credence to the idea that the intelligence community has it in for Trump.

But this is not about whether you’re for or against Trump. It’s about whether there's a cloak-and-dagger effort to subvert American foreign policy and ignite a new Cold War under false pretenses and spend tens of billions of dollars — that most certainly could be better spent elsewhere — to thwart a threat that doesn’t truly exist.

If this is the deep state fighting back against Trump, the efforts are working so far. The deep shroud of suspicion around Trump now makes it almost impossible for him to roll back sanctions on Russia, if that was ever his intention. While rumors swirl, Trump now appears to be on a mission to prove he is not indebted to Moscow. His tweet about Crimea on Wednesday was probably part of this effort.

As I have written before, none of this will particularly surprise the Kremlin. Despite popular belief, Russian officials have maintained low expectations for Trump from the outset, assuming that he would come up against powerful forces if he tried to get along with Moscow.

Last month Senate Minority Leader Chuck Schumer warned that Trump was “really dumb” to criticize the intelligence community because the spy agencies have “six ways from Sunday of getting back at you.” In retrospect, that statement reads as pretty ominous. Almost no one noticed it at the time.