Opiate for the masses: In selecting a black woman to woo, "The Bachelorette" does something it should have done years ago

Rachel Lindsay has become the first black Bachelorette in the show's 15-year history. Is it too late to care? 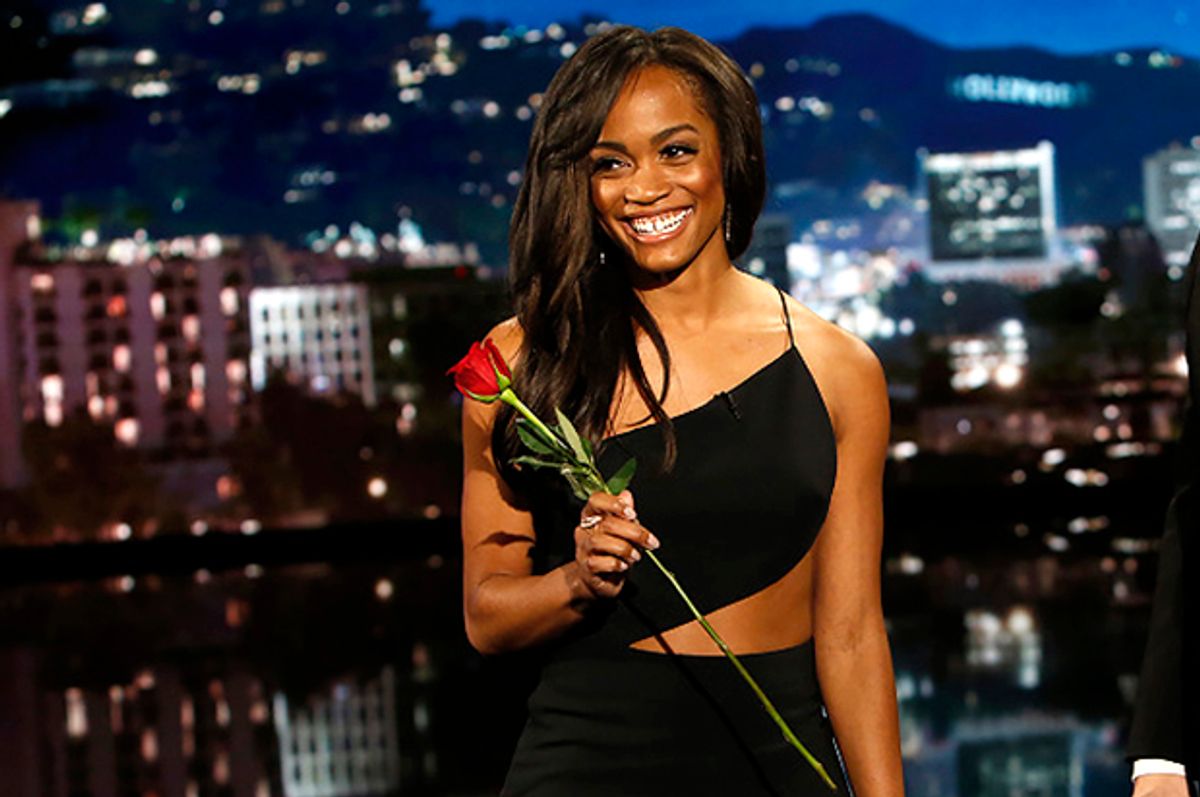 Rachel Lindsay is the next “Bachelorette” (ABC/Randy Holmes)
--

My phone rang around 6 o’clock Monday night, smack dab in the middle of dinner time, and those were the words that greeted me when I picked up. No greeting, no small talk. It was my friend Monica, an excessively polite woman, and if she had dispensed with the niceties, the news had to be of epic significance. “Hear what?” I replied.

“A . . . B . . . C,” she said, barely emitting each letter between hyperventilated gasps. “They’ve announced the next Bachelorette is going to be a black woman! One of us! Her name is Rachel Lindsay!”

I dropped my fork and jumped out of my chair. “Oh my word.” My hands began shaking uncontrollably, a side effect of living in such glorious times. “Oh . . . my . . . word.”

“Yes, girl, YES!” I could hear Monica begin to sob, and that made me well up too. “We finally made it. After 15 years, an African-American woman will be the one handing out the roses. Can you believe it?”

Speechless at the news, I responded in the only way I knew how, by doing something my mama taught me to do in times of celebration and in sadness to mark significant historical strides because we are a musical people. I began to hum. Quietly, at first, but with meaning and just the right amount of throaty bass.

On the other end of the line, Monica began humming along with me, her voice foggy with tears and phlegm. Seamlessly, moving with the instinct that’s been alive in our souls since the dawn of the ages, we launched into "Black National Anthem." “Lift every voice and sing / Till Earth and Heaven ring / Ring with the harmonies of Liberty . . . ”

Did you believe any part of that? There was no phone call. There is no Monica. I don’t refer to my mother as “mama.”

The only true part about what you just read is that after 15 years, ABC has finally selected a black woman to be “The Bachelorette,” announced on Monday night’s “Jimmy Kimmel Live!” The 31-year-old Lindsay is a Dallas-based attorney currently featured on season 21 of “The Bachelor,” in which Wisconsin's Nick Viall is currently engaged in his own quest for love. The 13th season of "The Bachelorette” will premiere on May 22.

Viall and Lindsay already made history this season when she became the first African-American woman in the history of “The Bachelor” to receive a coveted first-impression rose. For the edification of those who don’t watch the show, said flower is quite coveted because it saves a contestant from being eliminated the following week. It also signals to the rest of the women partaking in the Vagina Marathon that said lady is a front-runner out of the gate. That's right, sisters: We're finally desirable enough to spend more than two minutes in the Love McMansion!

In case you thought that romantic on-camera moment was as manufactured as the rejected Cicely Tyson drama script I penned above, well, duh! ABC has been taking it on the chin for years now about the blinding Caucasia that is the “Bachelor” franchise.

Season after season, men and women of color would show up in the early weeks of each “Bachelor” and “Bachelorette” round only to be eliminated. With few exceptions to the rule, minorities are basically the redshirts of “The Bachelor,” there to add some pepper to the mix as the season begins before being pushed off to the left so that the white Bachelor or Bachelorette can get down the business of selecting a suitable white mate. Fusion has reported that 59 percent of the African-American contestants who have appeared on the franchise are sent home within the first two weeks of the show. Until Lindsay, none had lasted more than five weeks.

It really is amazing to realize that of the 21 “Bachelors” and 12 “Bachelorette” chapters, only one lovelorn lead hasn’t been Caucasian: Venezuelan-born “Bachelor” Juan Pablo Galavis, who looks very European. (He’s also memorable for being a homophobe.)

ABC attempted to sell last summer’s Bachelorette, JoJo Fletcher — also from Dallas! — as “diverse” by citing her Persian heritage, hoping that most of its audience wouldn’t realize that Persians are white people, too. By that point, however, the cries about the unbearable whiteness of the longstanding faux-romance competition had hit a fever pitch.

Finding someone like Ms. Lindsay had to have been an inevitability at that point. (Also note that this diversity barrier was broken on “The Bachelorette” not “The Bachelor.” America still demonstrates squeamish feelings at seeing dark-skinned minority men competing for the affection of white women).

Tellingly, Lindsay’s first assurance to the public is that she just wants to settle down and find love, not overthrow the republic. “Honestly, it’s not going to be that different from any other season of ‘The Bachelorette,'” she told People. “I’m obviously nervous and excited to take on this opportunity but I don’t feel added pressure being the first black Bachelorette, because to me I’m just a black woman trying to find love. Yes, I’m doing on this huge stage, but again my journey of love isn’t any different just because my skin color is.”

The announcement of Lindsay as the new Bachelorette breaks precedent with the franchise because, as Kimmel pointed out on his show, she is still competing on this season's "The Bachelor." (By definition of the term Bachelorette, we now know she won't get Nick to put a ring on it.) What nobody has been publicly speculating about is why ABC is so hot to sell America Lindsay’s groundbreaking achievement now, before she has even been eliminated.

The answer is implicit in the fact that it took this long for ABC to warm to the idea of a nonwhite Bachelorette. Some might call this early leap ABC’s way of making promotional hay out of a huge turn that’s been a long time coming. But it seems that the network is doing what it thinks is necessary to ease the audience into the idea of a Bachelorette of a darker hue. If this weren't at least somewhat true, then Lindsay would have been treated like every other Bachelorette-to-be, and we would have received the news after she was eliminated. That has been standard practice until now.

Viewers may also note the fact that this is happening one year after Channing Dungey, an African-American woman, became ABC's entertainment boss. Her predecessor Paul Lee hinted at making “The Bachelor” universe more diverse, likely inspired by an unsuccessful discrimination suit in 2012 that got a fair bit of play in the press. But Lindsay’s selection happened on Dungey’s watch. Fascinating, no?

As for me, I acknowledge that this is a pivotal moment in pop culture history. It’s also an incredibly dumb and frustrating one. Put away the knives, Bachelor Nation. Regardless of what I say, Lindsay’s selection is a noteworthy triumph. But hearing this news made me recall a true memory from 1997, when Sudanese supermodel Alek Wek made history by becoming the first African model to grace the cover of Elle magazine.

More significant than Wek’s continental origin in breaking this barrier are her features; her dark skin and closely cropped natural hair represent a distinct type of sub-Saharan beauty. Wek’s influence and the power of her image was praised by Oprah and cited in 2014 by Lupita Nyong’o, who said her presence on the pages of high-fashion magazines made her feel "more seen, more appreciated by the far-away gatekeepers of beauty."

I remember chatting excitedly with a friend of mine about the magazine as I placed it in front of the cashier at the grocery store, who was white. The woman had overheard our conversation and appraised Wek on the magazine’s cover after she ran it across the scanner. Then she handed it to me and said, “I don’t mind.”

And I still remember her surprise at our shocked facial expressions. She probably thought she was supporting our excitement. But her words were a statement of permission and approval; we had asked for neither, and yet she decided she needed to bestow it upon us.

That, in a nutshell, hits at the heart of why the fuss over Lindsay’s selection is so annoying. Not the naked manipulation to get her to this point — reality TV runs on fakery — but the fact that ABC is making a parade out of finally saying, “We don’t mind!” to the world while telegraphing that it kind of does.

Lindsay’s elevation is a positive step in terms of representation, though. At last, here is an African American woman who is an object of romantic pursuit, and that matters, regardless of the real reasons the chosen men may have for wooing her. As she states, she simply wants the same things as every other Bachelor or Bachelorette.

It is inspiring to know that Lindsay proved to be a popular contestant right out the gate. The daughter of a United States district judge, Sam A. Lindsay, she loves sports, specifically the Dallas Cowboys and presumably enjoys long walks on the beach at sunset because who doesn’t? Only soulless jackholes, that’s who.

Fantastic, and way past due, and I still can’t bring myself to care all that much. But even that puts Lindsay in fine company. I didn’t care about Miss America until Vanessa Williams won the 1984 crown because I didn’t see anyone in that pageant who looked like me. Even after a scandal forced her to relinquish it, Williams rose to stardom. That meant something.

I didn’t care about high fashion, either, until I fell in love with Iman. And when David Bowie fell in love with her, I celebrated that. Like Iman, Bowie represented a higher ideal of art and beauty not beholden to any single culture's standards. Their appeal was universal, and so was their affection for each other. That, too, meant something.

Maybe viewers of “The Bachelorette” will see such meaning in Lindsay’s ride. Maybe she'll make me care about that show. The gymnastics that ABC is likely to engage in to promote Lindsay’s season will be worth watching in any case. As NPR’s Linda Holmes has pointed out, the selection of Lindsay’s suitors will be the true indicator of how ABC really feels about breaking new ground on its aging reality franchise. Will the men be a diverse group, another pool of white guys or entirely African-American — ergo, a different version of the same faux pas ABC has been committing for eons?

Regardless of what happens, ABC is giving Lindsay the greatest opportunity possible to optimize her time in the limelight. Reality-TV series aren’t merely viable pathways to love. They can also launch successful entertainment careers or be stepping stones to political office.

Perhaps Lindsay will transform the opportunity ABC is handing her on “The Bachelorette” and transform it into astronomical success long after she’s handed out the final rose. But even if her only prize is a lasting relationship, something that remains a rarity in "Bachelor" world, that alone may be a piece of history worth singing about.