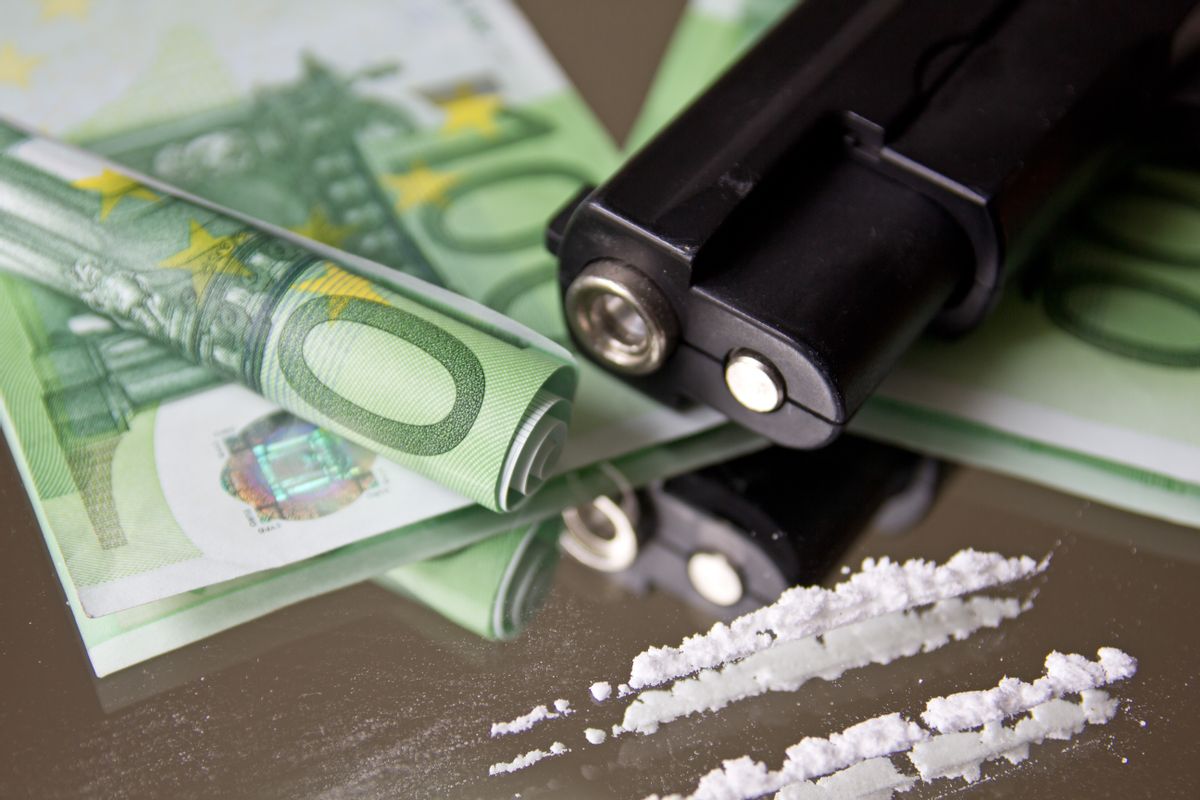 In a sharp break with the Obama administration, which distanced itself from harsh anti-drug rhetoric and emphasized treatment for drug users over punishment, President Trump this week reverted to tough drug war oratory and backed it up with a series of executive orders he said are "designed to restore safety in America."

Trump also lambasted the Obama administration for one its signature achievements in criminal justice reform, opening the prison doors for more than 1,700 drug war prisoners who had already served sentences longer than they would have under current, revised sentencing guidelines. Obama freed "record numbers of drug traffickers, many of them kingpins," Trump complained.

And in a sign of a return to the dark days of drug war over-sentencing, he called for harsher mandatory minimum prison sentences for "the most serious" drug offenders, as well as aggressive prosecutions of drug traffickers and cracking down on "shipping loopholes" he claimed allowed drugs to be sent to the U.S. from other countries.

In a New Hampshire campaign speech during the campaign, Trump called for more treatment for drug users and more access to overdose reversal drugs, but there was no sign of that side of the drug policy equation in Wednesday's speech.

On Thursday, Trump backed up his tough talk with action as, at the Oval Office swearing in of Attorney General Jeff Sessions, he rolled out three executive orders he said were "designed to restore safety in America," but which appear to signal an increasingly authoritarian response to crime, drugs, and discontent with policing practices.

The first, which Trump said would "reduce crime and restore public safety," orders Sessions to create a new Task Force on Crime Reduction and Public Policy, which will come up with "strategies to reduce crime, including, in particular, illegal immigration, drug trafficking and violent crime," propose legislation to implement them, and submit a report to the president within a year.

The second, regarding "transnational criminal organizations and preventing drug trafficking," directs various federal law enforcement agencies to "increase intelligence sharing" and orders an already existing inter-agency working group to submit a report to Trump within four months describing progress made in combating the cartels, "along with any recommended actions for dismantling them."

"I'm directing Department of Justice and the Department of Homeland Security to undertake all necessary and lawful action to break the back of the criminal cartels that have spread across our nation and are destroying the blood of our youth and other people," Trump said Thursday.

The third directs the Justice Department to use federal law to prosecute people who commit crimes against police officers, even though they already face universally severe penalties under existing state laws.

"It's a shame what's been happening to our great, truly great law enforcement officers," Trump said at the signing ceremony. "That's going to stop as of today."

The tough talk and the executive orders provoked immediate alarm and pushback from human and civil rights advocates, drug reformers, the Mexican government, and even the law enforcement community. The apparent turn back to a more law-and-order approach to drugs runs against the tide of public health and public policy opinion that the war on drugs has been a failure.

In a report released Friday, dozens of senior law enforcement officials warned Trump against a tough crackdown on crime and urged him instead to continue the Obama administration's efforts to reform the criminal justice system. The report was co-authored for Law Enforcement Leaders to Reduce Crime and Incarceration by former Dallas police chief David Brown, who won wide praise for his response after a gunman killed five of his officers last year.

"Decades of experience have convinced us of a sobering reality: Today’s crime policies, which too often rely only on jail and prison, are simply ineffective in preserving public safety," the report said.

The president's crime plan would encourage police to focus on general lawbreaking rather than violent crime, the report said. The Justice Department already spends more than $5 billion a year to support local police, much of it spent on "antiquated law enforcement tools, such as dragnet enforcement of lower-level offenses" and Trump's plan would "repeat this mistake," the officials wrote. "We cannot fund all crime fighting tactics."

"This rhetoric is dangerous, disturbing, and dishonest," said Bill Piper, senior director for national affairs for the Drug Policy Alliance. "We have had a war on drugs. It has failed. Tough talk may look good before the cameras, but history has taught us that cracking down on drugs and building walls will not stop the supply or use of drugs. It mostly causes the death and destruction of innocent lives. Trump must tone down his outrageous rhetoric and threats, and instead reach out to leadership from both parties to enact a humane and sensible health-based approach to drug policies that both reduce overdose and our country’s mass incarceration crisis."

Most public health experts argue that the prohibitionist approach to drugs has been a failure. They point to research such as a 2013 study in the British Medical Journalthat found that despite billions spent on drug prohibition since 1990, drug prices have only decreased and purity increased, making getting high easier and more affordable than ever before.

"These findings suggest that expanding efforts at controlling the global illegal drug market through law enforcement are failing," the authors conclude.

Public health analysts also point to research showing that between 1991 and 2001, even when the drug war was in full effect, rate of illicit drug use among teens rose sharply, while their cigarette smoking rate fell off a bit and their alcohol use dropped sharply. The substances that are legal for adult use were less likely to see increases than ones that are prohibited, the analysts point out.

Mexican Foreign Affairs Secretary Luis Videgaray also chimed in to note that there wouldn't be any Mexican drug cartels without American demand for drugs and to remind Washington that it's not just what's being exported from Mexico that is a problem, but what's being imported.

"For years, from the Mexican perspective, people say, OK, the problem with drugs — that it's creating so many violence, so many deaths of young people in Mexico — is because there's demand for drugs in the U.S.," Videgaray said. "We happen to be neighbors to the largest market for drugs. From the American perspective, it's just the other way around," he said, adding that both countries need to get past "the blame game."

If the U.S. is serious about helping Mexico disrupt the cartels' "business model," it needs to stop the southbound traffic in cash and guns.

"We need to stop illegal weapons flowing from the U.S. into Mexico," Videgaray said. "We always think about illegal stuff moving through the border south to north, but people forget that most guns — and we're not talking small guns, we're talking heavy weapons — they get to the cartels and create literally small armies out of the cartels."

Human Rights Watch reacted to a comment from Attorney General Sessions at his swearing-in ceremony that crime is a "dangerous permanent trend that places the lives of American people at risk," by noting that crime is down dramatically by all measures over the past 20 years despite a slight increase in violent crimes between 2014 and 2015. "There is no 'dangerous permanent trend' in violent or non-violent crime," it noted.

And Amnesty International swiftly reacted to the executive order calling for new federal penalties for crimes against police.

“Law enforcement officers face unique hardships and challenges due to the nature of their work," said Amnesty's Noor Mir. "Authorities are already able to vigorously prosecute crimes against law enforcement officers, and there is no history to suggest that officers are not fully protected by current laws. This order will not protect anyone, and instead it creates additional penalties that could cause people to be significantly over-prosecuted for offenses including resisting arrest.

There is a better way, said Mir, but that would require going in a radically different direction than where the Trump administration is headed.

"This order does nothing to address real and serious problems in the U.S. criminal justice system," he said. "Relationships between law enforcement officers and the communities they serve could instead be improved by investing in reform of the criminal justice system and better training for officers. Police already have laws protecting them, but there is no federal standard for the prosecution of officers who unlawfully kill civilians. Implementing a standard for lethal force in line with international standards will protect both police and civilians."

The Trump administration has outlined an approach to drugs and criminal justice policy with dark Nixonian and Reaganite underpinnings, promising more, more, more heavy-handed policing, more swelling prison populations, and more—not less—distrust and suspicion between police and the communities they are supposed to serve and protect.

In typical Trump fashion, his brash, draconian approach to the complex social problems around crime and drugs is creating a rapid backlash. Whether the rising opposition to Trump can rein in his authoritarian impulses and regressive policy approaches to the issue remains to be seen, but a battle to stop the slide backward is brewing.