We will replace you: New progressive PAC also warns Democrats who don't oppose President Trump will face a primary 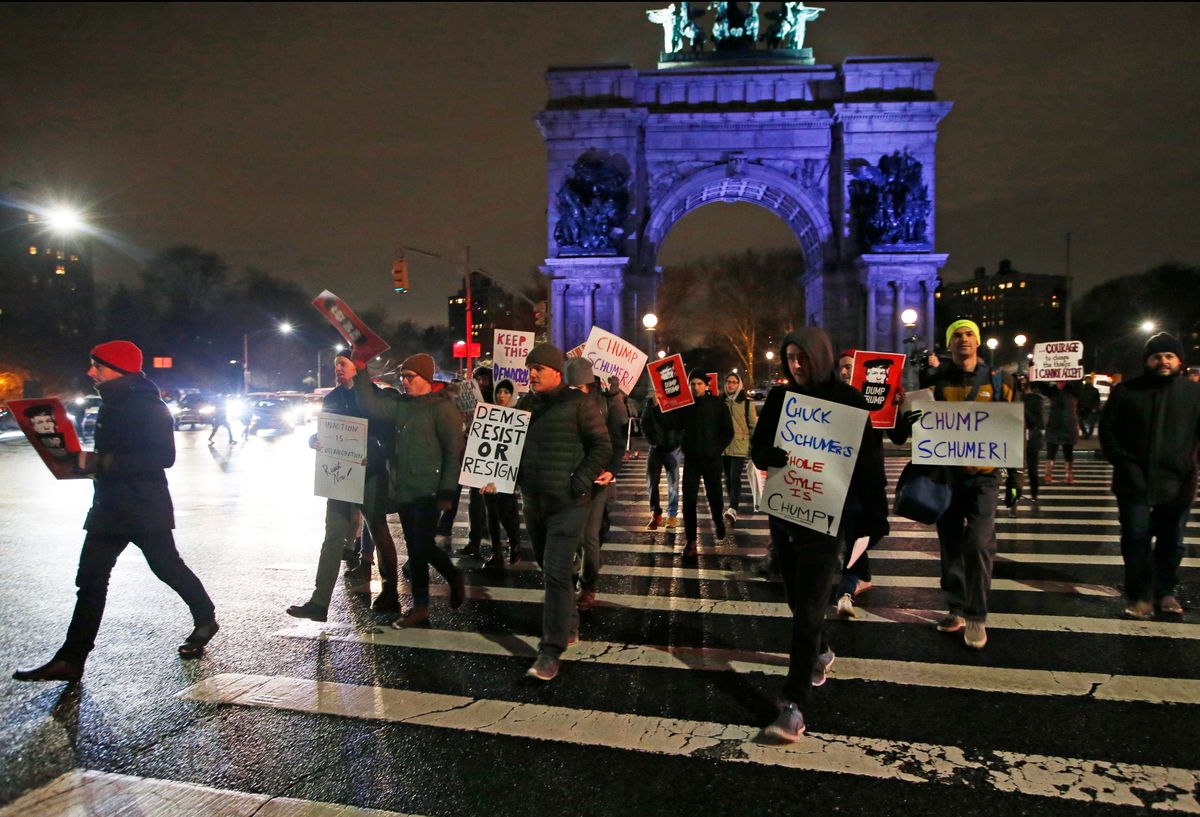 In this Tuesday, Jan. 31, 2017 photo, demonstrators protesting Senate Minority leader Chuck Schumer hold signs and chant as they march across the traffic circle at Brooklyn's Grand Army Plaza during a protest in New York. Liberals are vowing to put pressure on Schumer to mount a vigorous opposition to the agenda of President Donald Trump. (AP Photo/Kathy Willens) (AP Photo/Kathy Willens)
--

As more than 200 Congressional Republicans prepare to skip out on previously scheduled town halls in their home districts next week, progressive activists are warning Democratic lawmakers to not get too comfortable.

“If Democrats don’t get behind this movement, we may see a shake-up in the Democratic Party,” the president of Middle Tennessee State University’s College Democrats recently told The Atlantic.

Democrats and progressives across the country -- even in red states -- are gearing up for continued protests against the Trump administration.

During the the first congressional recess of the 115th Congress, the week of Feb. 18-26,  activists plan to show up at Republican officials' events, town halls, and other public appearances to protest Trump's and the Republicans' legislative agenda.

Next week's recess is our biggest opportunity yet to make sure that Republicans who side with Trump are held accountable and that Democrats understand that using every single tool at their disposal to block Trump's toxic agenda is not just justified, but absolutely necessary for our democracy — and our most cherished values — to survive the Trump era.

But according to the Town Hall Project, which collates information about public town halls, Republicans are running scared. As lawmakers return home to their districts to find constituents upset about plans to repeal Obamacare without a clear alternative, Republicans are discovering that holding the reins of power may not be all it’s cracked up to be.

“After outpourings of rage at some early town halls,” Vice News reported on Thursday. “Republicans are ducking in-person events altogether, opting instead for more controlled Facebook Live or ‘tele-townhalls,’ where questions can be screened by press secretaries and follow-ups are limited.” Just 19 Republican members of Congress have scheduled traditional town halls over the week-long recess.

“As of late, it has become apparent that some individuals who are not really interested in meaningful dialogue attend town halls just to create disruptions and media spectacles,” Tillis wrote in a letter shared with The Washington Post. “This is particularly unfortunate because it leads to a scenario in which only the loudest voices in the room can be heard and very little meaningful discussion can actually occur. While I am certain you have no interest in being a part of such a session, clearly some folks have intentions that are not as pure as yours.”

A group of Democrats who face reelection next year in states that voted overwhelmingly for President Donald Trump are also being targeted aggressively by activists.

"I may have a primary because there is, in our party now, some of the same kind of enthusiasm at the base that the Republican Party had with the Tea Party,” moderate Missouri Democratic Sen. Claire McCaskill said on St. Louis' “The Mark Reardon Show.” “Many of those people are very impatient with me because they don't think I'm pure. For example, they think I should be voting against all of Trump's nominees and of course I'm judging each nominee on its own merit."

Among Trump's 13 confirmed Cabinet picks, McCaskill has voted in favor of seven and against five.

"That's not good enough for some of these folks who want me to be just against Trump everywhere,” she acknowledged.

For her part, McCaskil is right. In some of the most conservative parts of the country, voters without much experience in political organizing are taking a page out of the Tea Party playbook.

The Indivisible Project, a group started by former congressional aides, wrote a “how-to” guide for progressive activists. “Tea partiers used these events to great effect — both to directly pressure their [members of Congress] and to attract media to their cause.” Of town halls, the co-founders wrote:

Attend the town halls of your members of Congress, coming up soon. Watch our latest video with Indivisible to find out how. pic.twitter.com/eeO0CUeMYx

At the same time, a new PAC called We Will Replace You is threatening to launch a primary challenges against any incumbents who are seen as being too wishy-washy when it comes to Trump. Senators such as Heidi Heitkamp, N.D., Joe Manchin, W.Va., and Joe Donnelly, Indiana, have all been singled out by We Will Replace You.

"We were not happy to see some Democrats vote for so many of Trump’s appointees,” said Claire Sandberg, a co-founder of the group and the digital organizing director for Sen. Bernie Sanders’s 2016 presidential bid, told the Post.

Conservative outside groups, including FreedomWorks, are also working to counter the progressive activism by organizing repeal rallies of their own.