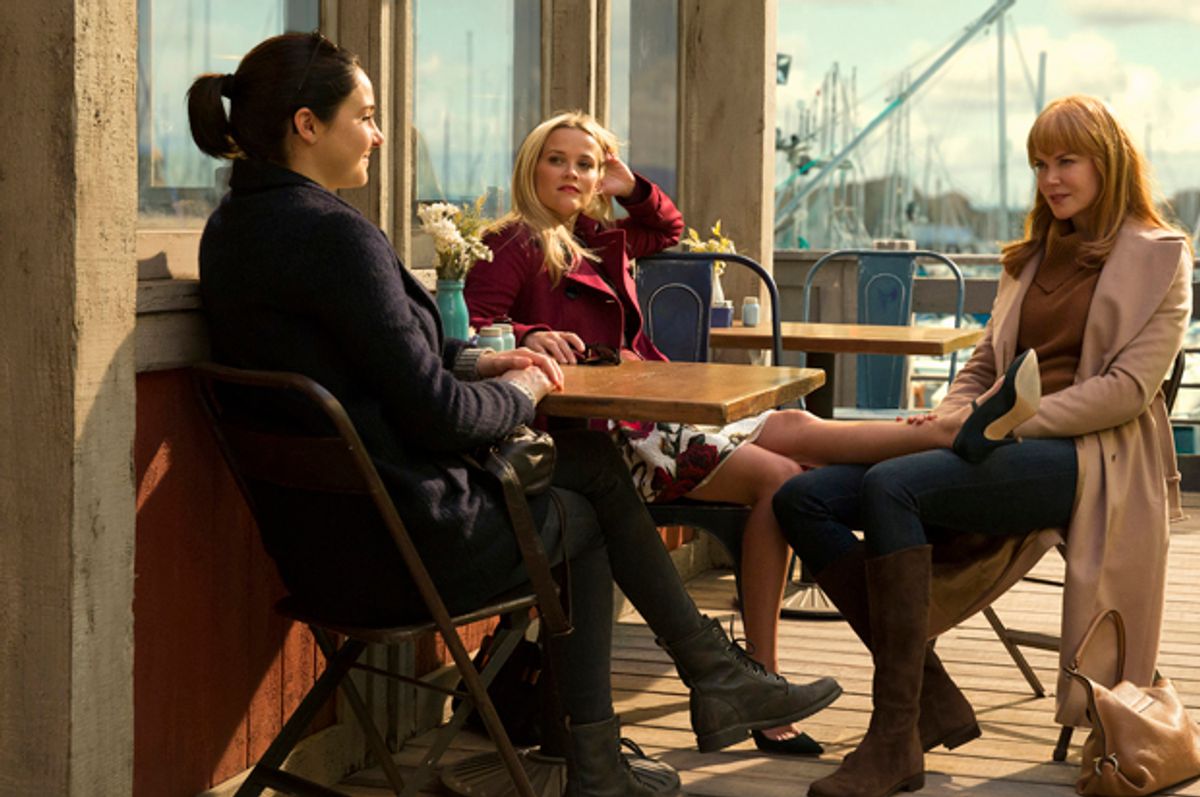 A decade ago some version of “Big Little Lies” would have been prime fodder for Lifetime. Where else would the story of a community of competitive women who define themselves by social status, money and accomplishment play well? Not to mention one in which the queen bee lords her power over other alpha females by using her children as pawns, in a town where everybody has secrets and someone eventually ends up dead?

One of the major determinations that made “Big Little Lies” worthy of becoming an HBO limited series as opposed to a made-for-TV movie, of course, is that Reese Witherspoon and Nicole Kidman produce and star in it, and were therefore able to attract commensurately huge names.

Zoe Kravitz, Laura Dern, Shailene Woodley, Alexander Skarsgård and Adam Scott co-star. Jean-Marc Vallée directs and David E. Kelley wrote each episode; both also share executive producer credits. These are not names you’d find on the Network for Women 10 years ago or even now. Nevertheless, “Big Little Lies” feels like several of those movies rolled up into one and painted with prestige varnish.

You can’t say that Monterey, California, lacks for gorgeous beaches and stunning vistas. Combining the seaside view with beautiful movie stars compensates a lot for its shortcomings, foremost being the story. “Big Little Lies,” premiering Sunday at 9 p.m., is a murder mystery in which any one of the principals has a motive to kill and reason to be killed, in a town full of unlikable people. Somebody dies. The question you’ll have to ask yourself is whether that death is a tragedy or just the answer to a weak riddle.

Liane Moriarty’s best-selling novel, upon which the HBO limited series is based, has a wicked sense of humor to it that Kelley’s script noticeably lacks, which takes some of the zing out of Kelley’s story. But the appeal of gossip, secrets, deception, bitchery and murder seasons even the blandest tales, and “Big Little Lies” has ample portions of all these elements, elevated by performances that can be campy in one moment and soulful in the next turn.

How engaged viewers will be depends on their capacity and fascination with the lives of the ultrarich, gorgeous and discontented.

“Big Little Lies” contains its share of thoughtful interludes that capably portray the poisonous nature of small-town jealousy and assumption, especially pertaining to the story’s ultimate insiders and outsiders. When it takes a hard look at the value women place in balancing or choosing between motherhood and career, it’s actually good. And as the series evolves, the sins and secrets that these women are hiding become the small evils that threaten to push each of them to the brink.

At the same time, “Big Little Lies” centers its attention on three characters who are the latest versions of stereotypes we’ve lived through many times already. Witherspoon’s Madeline Martha Mackenzie is at the top of Monterey’s social layer cake — a prickly, obsessive matron clutching her anger at her ex Nathan (James Tupper) and resentment of his free-spirited second wife Bonnie (Kravitz), much to the consternation of her husband Ed (Adam Scott).

Madeline isn’t a popular figure at the local school, but she wields significant influence, enough to take on the mayor when he threatens to shut down a controversial production she’s producing at the community playhouse.

When a young, single mom named Jane (Woodley) moves into the community, Madeline takes her under her wing. Jane lacks the financial means to fit in smoothly, and a dustup involving her son makes integration nearly impossible. But Madeline does what she can to support Jane, bringing her into an intimate circle that includes Celeste (Kidman), who, like Madeline, is a stay-at-home mom. Celeste's husband (Skarsgård's Perry) is often away on business and harbors control issues.

Their bonding over motherhood puts them in opposition to Dern’s Renata Klein, a well-connected career woman who already makes Madeline’s blood boil before an incident at school involving Renata’s daughter and Jane’s son sparks a chain of nasty events. When Jane’s boy is branded as a bully, the mother and son are ostracized by the closed-off community. But that may not be as damaging as Madeline’s meddling.

“Big Little Lies” is a seven-part series; watching six of those episodes left me with the impression that the producers could have done justice to the story in four hours or less. Watching the women flex their social status loses its spice almost immediately, and though wicked drama can certainly be wrought out of witnessing women wage psychological warfare, that does not play out here. Witherspoon’s Madeline is a collage of contradictions — supportive and loyal, but also dishonest and eager to stir up the pot. Woodley’s Jane has a secret, but it’s a legitimately heartbreaking one that's used by Madeline to feed her thirst for drama.

Kidman is particularly frustrating as Celeste, a beautiful woman whose marriage appears to be happy and hot, stoking jealously among the townsfolk. The truth is altogether different, but Kidman's rendering of her character is devoid of complexity; Celeste's troubles should evoke empathy, but instead it’s just difficult to watch — meaning, barely viewable.

Use of the murder as a framing device is the carrot that’s meant to keep the viewer watching “Big Little Lies,” but it only works if someone really needs to find out which of these intermittently tolerable characters gets bashed in the head. A viewer will have to put up with a lot of self-indulgent rich people chatter on the way to that revelation; and the titular lies are a little too run of the mill to keep a person hooked.

Further into “Big Little Lies” the series gets to the heart of the so-called mommy wars, and the characters admit to themselves that they desire something greater than the privileged, limited lives they’re living. The series also could have spent more time exploring what hints at being a sensitive portrayal of post-traumatic stress disorder and survival but alas, Kelley becomes too caught up in providing honey to the lesser bees in the hive for that subplot to reach full potency.

Seeing “Big Little Lies” receive the HBO treatment may be inspiring for the author's fans who may be happy to see her receive more exposure. Too bad its uptightness gets in the way of its potential for pleasure — even that of the guilty variety.