Most people have no idea who Milo is, except that he claims to be "Dangerous." Friday night, Bill Maher showed them 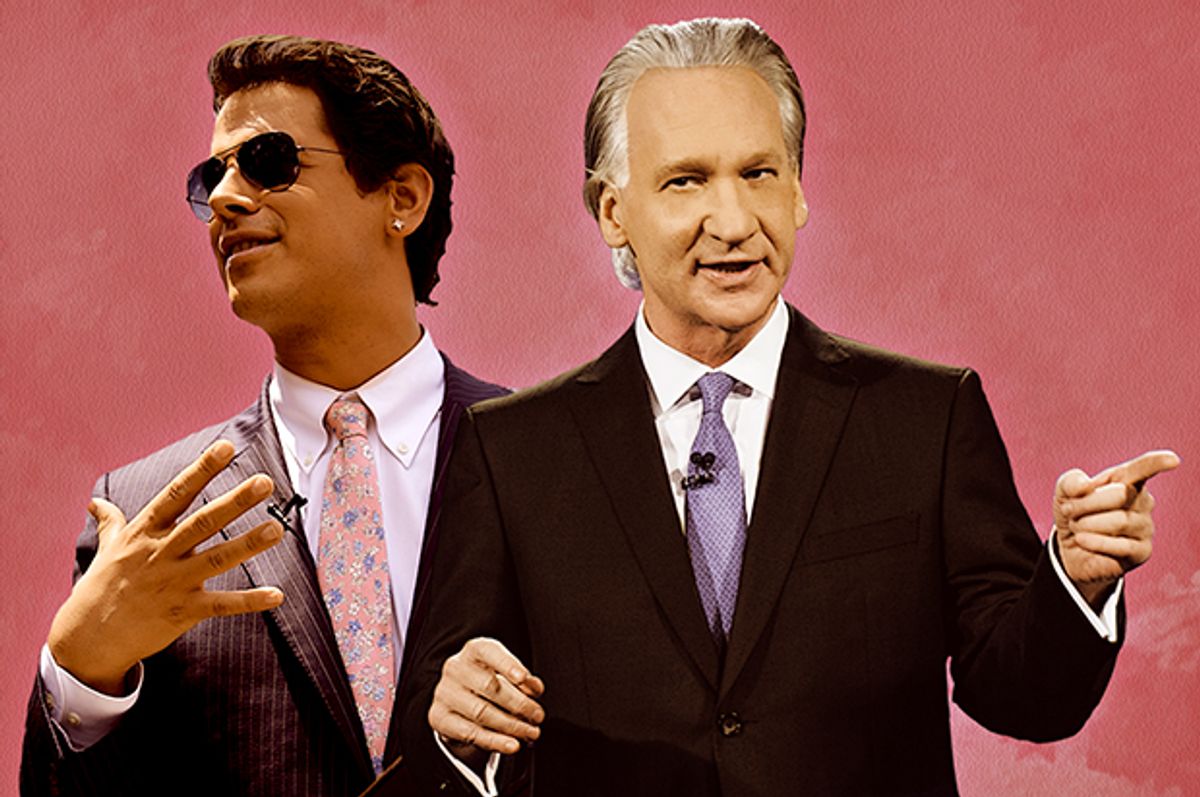 When it was announced that this week’s episode of HBO’s “Real Time with Bill Maher” would feature so-called “right-wing provocateur” Milo Yiannopoulos, some people freaked out. Many seemed to believe that bringing Yiannopoulos on the show would legitimize a noxious professional troll, as if that horse hadn’t already escaped the barn when America elected one president.

Journalist Jeremy Scahill, co-founding editor of The Intercept, canceled his own booking in protest. In his one-on-one segment with Maher at the top of the show, Yiannopoulos called that approach out: “If you don’t show up to debate, you lose.” On one hand, not every debate is worth sitting in the makeup chair for. (I’ve seen the Milo show; I’ve seen better.) But Yiannopoulos isn’t leading a political movement; he’s an attention-seeking troll. They don’t feed on legitimacy, but rather scandal and outrage, which Scahill helped deliver. For my part, I was irritated that I’d have to sit through an interview with this guy before getting to Leah Remini’s Scientology Dirt Bag, so it’s not like I had a high horse to climb off of.

It's easy to forget, if you don't live on the Internet, that most people in America — and quite possibly most “Real Time” home viewers — likely have no idea who Milo is or if they should care about him at all. (Third *NSync alum from the right?) If their first up-close exposure to Milo Yiannopoulos, C-Lister Famous for Something or Other, was last night’s “Real Time,” I can’t imagine they now understand what all the fuss is about.

Yiannopoulos came out quite saucy and self-satisfied — ain’t I a stinker? — so Maher, ever the comedy veteran, heckled him right out of the gate: “You look like Bruno.” Milo pouted, and then turned his exaggerated frown into a smirk after a beat. “You know I told [the make-up artist] to dial down the contouring.”

Despite their flirty greetings, Maher didn't let Milo off easy. They agreed on a few things, like how liberals are too easily offended, but throughout the interview, Milo seemed squirmy, a bit flustered and obviously outmatched by his host. Maher wasn’t interested in gossiping about Lena Dunham, Amy Schumer and Sarah Silverman, whom Milo lamely joked were funny before they “contracted feminism.” In fact, he dismissed most of Milo’s low-hanging outrage-bait as just kind of stupid.

Maher’s challenge here was not being cast as Principal Skinner arguing with Bart Simpson, and for the most part, he succeeded. “You’re wrong about certain things,” Maher tells him flatly, giving examples from Milo’s own spiels: “Black Lives Matter is a hate group. There’s no such thing as white privilege.”

Maher, a consistent atheist, also dinged Yiannopoulos for "bullshit stupid thinking" when Milo gave Catholicism a pass he doesn't extend to other religions.

Yiannopoulos insisted that he’s funny and that his jokes “build bridges.” All he cares about, he claimed, is free speech and free expression, which he described as “now a conservative position.”

“I’m the guy who always defends jokes, right up to the point where they pointlessly hurt people,” Maher said, bringing up the campaign of vicious harassment against “Ghostbusters” star Leslie Jones that got Yiannopoulos banned from Twitter.

Milo’s defense was a mess of facile talking points. “I like to think of myself as a virtuous troll,” he said. He also claimed, “What actually hurts people is murder, violence. Mean words don’t hurt people.”

“Which some people would say you’ve incited,” countered Maher, though he didn’t give any concrete examples.

“They would be idiots,” said Yiannopoulos.

For a couple of years in the 1980s, my family lived in Germany, where Nazi symbols were, for very understandable reasons, forbidden. As an earnest 7-year-old who read a lot of children’s literature set during World War II, it freaked me out to see swastikas scratched and inked into naughty graffiti, presented with as much gravity and political intent as butts-and-boobs doodles were back home. Little kids test social boundaries all the time. They’re drawn to the illicit — like giggling over Nazi symbols, which they know are bad but don’t quite understand — because that which is frightening for abstract reasons can also be thrilling, even titillating. Part of growing up — as I hope the kid at my Catholic school who was responsible for that graffiti did, eventually — is learning how one kid’s abstract illicit thrills can be another person’s concrete and dangerous threats, and adjusting your behavior accordingly.

Yiannopoulos is an intriguing conundrum because even though he’s an out gay man in his 30s, not a doodling child, he refuses to connect his own flippant denigration of gay people as hyper-sexed, druggy and untrustworthy — abstract jokes he’s in on — to the concrete threat of discrimination or even violence that LGBT people face from those who may feel emboldened or justified by those attitudes. Maybe he feels those fears are idiotic. Most of his fans are likely in it for the dark thrill of an illicit giggle alone: the permission to laugh at a gay joke because a gay man made it. But how grotesque of a spotlight-chaser does one have to be to ignore the possibility of the fan that isn’t? And how narcissistic is it to forcibly extend that "in on the joke" intimacy to those who haven't issued an invitation first, like women, black people or Muslims?

On one hand, it’s a pity Maher didn’t have time to delve that deep into a discussion of the philosophy of “j/k lol” with Yiannopoulos. On the other hand, it’s not like Milo said anything on “Real Time” that indicated he’d be up for a challenging intellectual discussion about where the line is, and what it’s used for.

Throughout the segment, Milo demonstrated that as far as provocateurs go, he’s nowhere near Maher’s level. You can disagree with Maher's positions on politics and religion, but he's a pro who can back a gag or a flat statement up with reason and consistency. Milo’s a snarky brunch friend on a second round of Bloodies for people who don’t have snarky brunch friends. (Get off Gab once in a while and buy a round, fanboys! You can get your fill of Lena Dunham jokes in person.) He’s managed to build a public speaking and publishing career on little more than being shameless, disgusting and reasonably attractive at the same time. America, land of opportunity!

Maher closed the segment by scolding his audience. “Stop taking the bait, liberals!” he cried. “You’re all freaking out about this fucking impish British fag! You schoolgirls!”

Maher’s using his words as a blunt instrument here, but the sentiment’s not wrong. Exposing Yiannopoulos as a lightweight “famous for doing nothing” vacuous Twitter celeb on TV — as Maher just did — is likely going to be more effective at limiting his cachet and influence than inadvertently building up his illicit, underground cred through outrage. Pushing a malignant thing like Milo Yiannopoulos out into the spotlight isn’t necessarily normalizing it. Sometimes the cliché is true, and sunlight really is the best disinfectant.